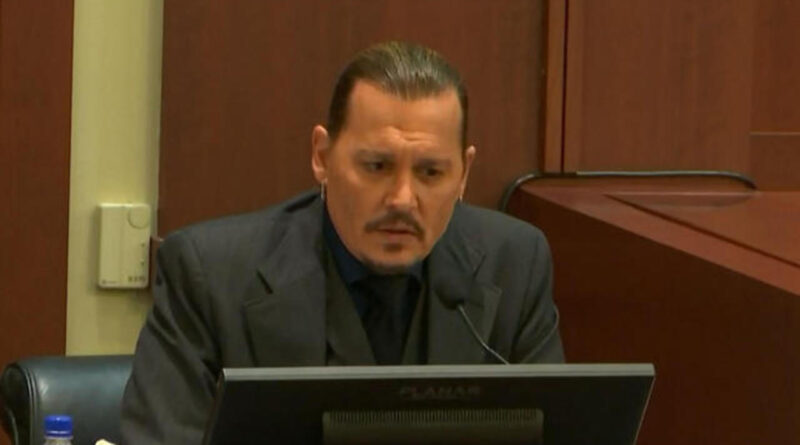 ENTERTAINMENT NEWS
29/04/202229/04/2022 Melana 0 Comments Johnny Depp
Johnny Depp testified for three days this week in the trial over his lawsuit against his ex-wife Amber Heard. Depp is suing Heard for libel, alleging that she falsely portrayed him as a domestic abuser and harmed his lucrative acting career. The claim centers around a 2018 op-ed Heard wrote in the Washington Post in which she made references to suffering abuse, but did not name Depp.On the stand, Depp said he never hit Heard and that he has never struck a woman. He accused Heard of abuse and also spoke extensively about his own issues with drugs and alcohol. Here is a look at some of the most shocking moments from the trial so far. Depp’s testimony is set to continue Monday.

1. Depp said he painted with the blood on his finger after it was cut during a fight with Heard

During his testimony, Depp alleged that during a violent argument in Australia in 2015, Heard threw two vodka bottles at him and when one exploded, it sliced his finger to the point where bone was exposed. He claimed it resulted in the tip of his middle finger being cut off.

Depp said after being cut, he wrote on the walls with his blood and then dipped his finger in paint to keep writing. He said: “The blood had dried as it were, and so I stuck my finger into a can of paint and also mineral spirits to put my verbal messages onto the wall.”

2. Lawyers asked Depp about things he wrote during the incident

Depp said he wrote “reminders” on a mirror after Heard filmed a movie with actor Billy Bob Thornton. Photos of the mirror showed the words “Billy Bob and Easy Amber.”

He also wrote on a lampshade, a photo of which was also shown during the trial. “On this lampshade, which appears to be sitting on the ground, you write, in some mixture of blood or paint, ‘Good luck and be careful at top,'” Heard’s lawyer asked.

3. Audio of Heard discussing alleged harm from Depp was played

Audio was played during the trial in which Heard spoke to Depp about the alleged harm he had done to her. “By the way, my family, my friends, everyone around me saw all the bruises, a broken blood vessel under my eye, bruises on my head, the missing chunks of hair, the split lip, the black eye, the swollen nose,” she said.

4. An image of a bruise Depp allegedly received from Heard was shown

Depp claimed Heard “roundhouse punched” him, which resulted in a bruise under his eye. He also claimed that during the altercation, he thought she hurt her foot on a door and when he went to check on her, “she kicked the bathroom door into my head.”

“And I was completely taken aback by such a corrosive horrific move,” he said.

5. Depp speculated why Disney cut ties with him

Heard’s lawyer said reports of Disney cutting ties with Depp came before Heard’s 2018 op-ed was published. “Were you aware that it was being reported, as it is in this article that ‘Johnny Depp is out as Jack Sparrow in Disney’s Pirates of the Caribbean franchise as actor battles financial issues and personal dramas?’ Were you aware of that?” he asked Depp.

“I wasn’t aware of that but it doesn’t surprise me given two years had gone by of just constant worldwide talk about being this wife beater,” he said, alleging Heard publicly defamed him. “So I’m sure that Disney was trying to cut ties to be safe. The MeToo movement was in full swing at that point.”

A video of Depp and Heard arguing, during which he becomes aggressive, was played during the trial. Depp is seen pouring wine while angrily asking: “Want to see crazy, I’ll give you [expletive] crazy. I got your crazy. All you’re crazy.”

He then notices she is recording and tussles with her, during which the video cuts out. Depp confirmed to Heard’s lawyer during questioning that it was him in the video and it was at his West Hollywood home. “And you would agree, that you were violent in that clip, correct?” the lawyer asks.

“Clearly I was having a bad time,” Depp replied. He said Heard illegally recorded him, adding, “I did assault a couple of cabinets but I did not touch Ms. Heard.”

When asked if he was drunk when the video was taken, Depp said it was possible. “You poured yourself a mega pint of red wine, correct?” the lawyer asked.

“A mega pint?” Depp replied, laughing. “I poured myself a large glass of wine. I thought it necessary.”

7. Depp was asked about taking drugs with Marilyn Manson

“Um. Yes, we’ve drank together,” Depp said, when asked if he had done drugs with singer Marilyn Manson. “We’ve had cocaine together a couple of times.” Manson, whose real name is Brian Hugh Warner, has been accused of sexual misconduct by multiple women.

When asked if he took pills with Manson, Depp said: “I once gave Marilyn Manson a pill so that he would stop talking so much.”

8. Texts from Depp to his friend and sister were shown: “Too much of the drink”

Text messages from Depp to his friend Paul Bettany reveal he told the actor about an occasion where he drank too much around Heard. Heard’s lawyer read the text out loud. “You may have to drink for me,” Depp wrote to Bettany. “I, of course, pounded and displayed ugly colors to Amber on a recent journey. I am an insane person. And not so fair headed after too much of the drink. Weed, pills, fine. Booze? My capacity is too large and won’t stop. Ugly and sad. Oh, how I love it.”

Texts to his sister, Christi, were also shared as evidence. “She wants to talk to me, she doesn’t know what to do. Loves you, but doesn’t always know what to do. She’s worried about it all,” Christi wrote to Depp about Heard.

9. Audio was played where Heard alleges Depp head-butted her

In an audio recording, Heard questions Depp why he can head-butt her but he took issue with her screaming.

Depp said he would “vehemently disagree” with the allegation, adding that he was trying to restrain her. He said their heads likely bumped when she was moving around as he restrained her.

10. Photo of large bags of marijuana was shown

Heard’s lawyer showed Depp a photo of at least four large bags of marijuana next to a cup with the logo of his film company, Infinitum Nihil. Depp confirmed the photo was taken at his recording studio.

11. Depp admitted to trashing hotel rooms in the past

“Correct. I have assaulted a couch or two. Yes, sir,” Depp replied. When asked if he has expressed himself through destructive behavior, Depp agreed.

Heard’s lawyer asked, “And you’d said in an interview one time, you said the following, quote: ‘You know, you have bad days, and you know, some guys go play golf, some guys you know, smash hotel rooms.’ You’ve said that before, right?”

“As a joke,” Depp replied. He said he doesn’t believe he’s the only person to have punched a door or broken something during an “internal bout” with himself.

Heard’s lawyer questioned Depp about texts sent in April 2015 to someone called “sis,” who may have been Heard’s sister, Depp testified.

“I never, ever want to lay eyes on that filthy whore,” Depp texted. “Amber a most embarrassing.”

“And when you called Amber ‘that filthy whore,’ she was your wife at the time, correct?” the lawyer asked.

13. Depp said his mother abused him

Depp said during his childhood, physical abuse from his mother was “constant,” with abuse coming in the form of ashtrays being flung or a high-heeled shoe or telephone being used to beat him. He said he wanted to make sure his children didn’t experience that kind of upbringing.

14. Depp spoke about Elton John trying to get him sober

“Elton John was one of your friends who was trying to help you get sober, correct?” Heard’s lawyer asked, which Depp confirmed. “And you sent him a message in 2012 where you thanked him for his help and you said, quote, ‘I would have been swallowed up by the monster were it not for you? That is a simple fact.’ Isn’t that true?”

The word monster was used at another point in the trial, when Depp said Heard called him a monster when he was on drugs and alcohol — and that she continued to use it when he was “stone cold sober of alcohol and substances aside from my meds,” he said.

Depp said while Heard was at Coachella, he decided to go to the penthouse they shared and pack his things when she wasn’t home. His bodyguard warned him fecal matter was found left in the bed.

“That was as absurd and grotesque and cruel and then I was shown a picture of what the problem was,” Depp said during the trial.

He said Heard kept denying it, blaming it on their small dogs, but he was convinced she was lying.