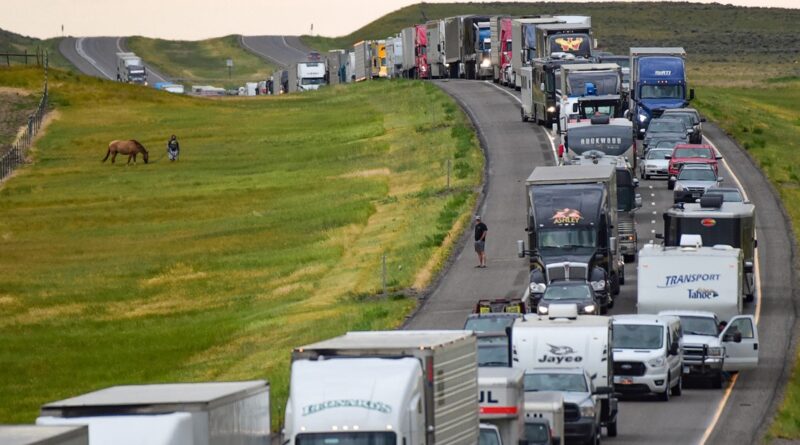 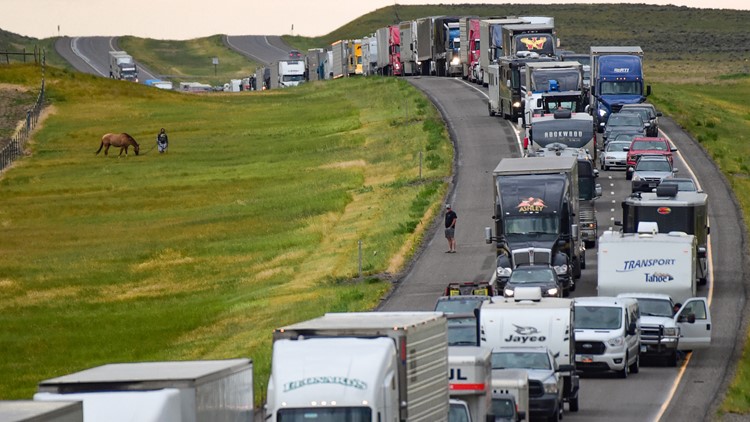 Credit: AP
Traffic is backed up on Interstate 90 after a fatal pileup where at least 20 vehicles crashed near Hardin, Mont., Friday, July 15, 2022. (Amy Lynn Nelson/The Billings Gazette via AP)

“It appears as though there was heavy winds, causing a dust storm with zero visibility,” he said.

While the highway patrol did not have an immediate count of the number of injuries, Nelson said additional ambulances had to be called in from Billings to help.

Gov. Greg Gianforte said on Twitter: “I’m deeply saddened by the news of a mass casualty crash near Hardin. Please join me in prayer to lift up the victims and their loved ones. We’re grateful to our first responders for their service.”

I’m deeply saddened by the news of a mass casualty crash near Hardin. Please join me in prayer to lift up the victims and their loved ones. We’re grateful to our first responders for their service.

Montana Attorney General Austin Knudsen, who oversees the highway patrol, said in a statement: “The Montana Highway Patrol is on the scene with other first responders and investigating the incident. We will release more information as it becomes available and is appropriate out of respect of the lives lost and their loved ones.

“My prayers are with everyone affected by the tragic events during the dust storm in Big Horn County today,” Knudsen added.

The incident happened 3 miles west of Hardin. A video from The Billings Gazette showed hundreds of tractor-trailers, campers and cars backed up for miles along the two eastbound lanes of the interstate.

The dust storm’s roots can be traced back several hours, when storms popped up in central southern Montana between 1 and 2 p.m. and slowly began moving east, according to Nick Vertz, a National Weather Service meteorologist in Billings.

Those storms prompted a severe thunderstorm watch that covered Hardin and other parts of Montana from mid-afternoon until 9 p.m. Friday. Meteorologists forecasted the potential for isolated hail the size of a quarter, scattered wind gusts up to 75 mph and frequent lightning.

A so-called “outflow” — or a surge of wind that’s produced by storms but can travel faster than them — flew east/southeast about 30 miles ahead of the storms, Vertz said.

A 40 mph gust of wind was recorded at the nearby Big Horn County Airport at 4:15 p.m. The crash was reported to the highway patrol at 4:28 p.m.

By the airport weather station’s next reading at 4:35 p.m., the gusts had picked up to 62 mph . Another reading 20 minutes later recorded a gust of 64 mph.

The wind easily picked up dust — a product of recent temperatures into the 90s and triple digits over the last week — and reduced visibility to less than 1/4 mile.

“If they looked up in the sky while they’re in Hardin, they probably didn’t see much of what you’d think of for a thunderstorm cloud, maybe not even much at all,” Vertz said. “It was just a surge of wind that kind of appeared out of nowhere.”

As first responders attempt to clear the wreckage, the meteorologist said they can expect to be safe from additional winds and thunderstorm activity.

“It should be a relatively clear, calm night for them,” he said.