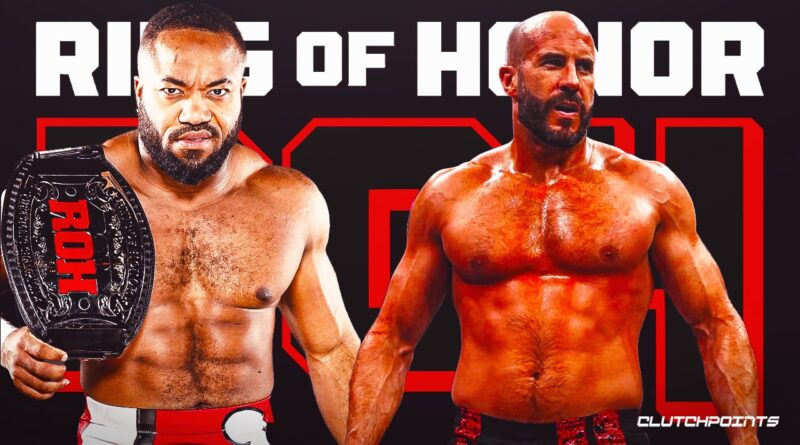 After over three months away, with just the occasional bout on AEW television to keep the flame flickering, Ring of Honor is bursting back to life with Death Before Dishonor, the second Pay-Per-View of the Tony Khan era and the 19th overall running of the event, which has typically served as the promotion’s big summer show. Yes, after months away, ROH faces new and old from Dalton Castle to Vincent, The Briscoes, Jonathan Gresham, and Claudio Castagnoli will face off against AEW staples like Daniel Garcia, Serena Deeb, Colt Cabana, FTR, and, well, Claudio Castagnoli as well, with the future of the promotion likely hanging in the process. Which “old guard” performers will prove their worth and secure a new long-term contract with the company? Wich AEW star, typically locked in the mid-card without a clear path to the top, will instead find new luck in ROH, where their talents will be appreciated?

Fortunately, with 11 total matches on the card, including four on the pre-show – dubbed Zero Hour by TK and company – and seven more on the big show, fans will have ample opportunities to scout out a new crop of performers and see Khan’s capabilities to recontextualize his booking talents under the banner of arguably the most prestigious “new” promotion of the last 20 years. Here’s a fun fact about each match on the card to ensure you have the proper context going into it.

Ring of Honor’s Death Before Dishonor is absolutely loaded with fun facts.

Hmm… I wonder if they could team up once more in the very similarly named LA Faccion Ingobernable in AEW? If Jose the Assistant’s tweets are of any indication, that might just be a storyline to keep an eye on.

6. The Righteous vs. Dalton Castle and The Boys

While Dalton Castle and The Boys have appeared on AEW television once before, wrestling Jonathan Gresham at Battle of the Belts II, Vincent of The Righteous has been busy in Impact Wrestling, where he’s performing alongside fellow ROH castoffs PCO, Kenny King, Mike Bennett, Maria Kanellis-Bennett, and his former Kingdom partner Matt Taven as Honor No More.

Initially portrayed as “invaders” who were trying to start trouble in the promotion, they officially became part of the promotion as full-time performers shortly thereafter and even teamed up with Eddie Edwards to wage war against Scott D’Amore and company, even if his former American Wolves partner Davey Richards doesn’t get it. If you’re a fan of old ROH, tune into Impact sometime for about 15 minutes of a blast from the past on the promotion’s weekly television.

Before Mercedes Martinez and Serena Deeb were ready to rumble as foes at Death Before Dishonor, they were a tag team, performing together on five separate occasions on AEW Dark: Elevation. Still, that marriage of convenience proved short-lived, and much like in the four previous times they shared a ring, all of which occurring in Japan, they will meet as foes competing for the Ring of Honor Woman’s Championship.

Wheeler Yuta and Daniel Garcia have a long history on the indies, including a fantastic bout at IWTV 100 for the IWTV World Championship that ended in a time-limit draw, but what you may not know is that they haven’t shared the ring as singles, tag team, or even trios match in AEW during their first year in the promotion. No, despite being on dozens of the same cards, their only matches against each other have been as part of June’s Casino Battle Royal and during Blood and Guts.

Fortunately, that’s about to change, and fans of independent wrestling will be the beneficiaries of it.

Where has Samoa Joe been? Jay Lethal has been asking this question a lot when he’s not beating up Ric Flair in a random parking lot alongside Jeff Jarrett, and at this point, the answer remains very a mystery to anyone… unless you have the internet.

That’s right Jay, if you simply Google “Samoa Joe”, you will find out that he’s been away filming Twisted Metal for Peacock, where he will play the role of Sweet Tooth. Assuming Joe didn’t suffer an injury on set, he should be ready to take care of business against the ROH Triple Crown winner.

When FTR took on The Briscoes at Supercard of Honor, expectations were high, but few expected the match to be just as good as it was. Both teams gave it their all, near-falls were abound, and the “Top Guys” took “Dem Boys” belts before being interrupted by ROH alumni The Young Bucks, who challenged for the belts soon after in their second joint bout in AEW.

FTR-Briscoes I, given five stars by Dave Meltzer, is currently tied for the highest-rated tag team match of the year according to The Wrestling Observer and is one of only five matches overall to hit the five-star mark so far in 2022.

As you may or may not know, Claudio Castagnoli has never held a singles belt in Ring of Honor, having only been tag team champion alongside Chris Hero of The Kings Of Wrestling.

Jonathan Gresham, by contrast, has won the ROH Pure, Tag Team, and World Championship – with 225 days and counting with the belt – as one of the longest-tenured performers in the company. Does TK stick with ROH history and keep Gresh on top? Or will he instead give his newest star a belt? We soon will see.