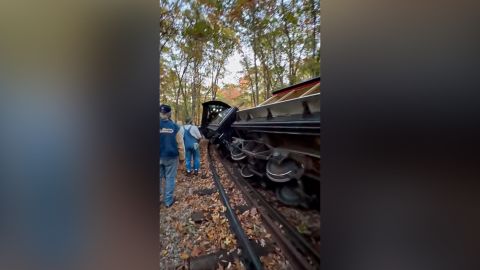 CNN — Several people were injured Wednesday at an amusement park in Branson, Missouri, after sections of a train ride derailed from the track, the park said.

Six guests and one employee were transported by ambulance to get medical treatment, the Silver Dollar City theme park said in a statement on Twitter. The park did not detail the extent of the injuries.

The Frisco Silver Dollar Line Steam Train brings guests on a scenic 20-minute ride through the countryside, interrupted by a theatrical “stick-up” by a band of train robbers, the park’s website says. The ride is billed as a staple of the park that has been in operation since 1962.

Several train cars are seen flipped on their side.

Gary Eldridge and his family came to Silver Dollar City for the pumpkin festival and were riding in the last car of the train when it derailed, he told CNN.

“We had just passed the part of the ride where they gave the moonshine skit,” Eldridge said. “We went around the next corner and the car in front of me acted like it hit a bump and started shaking real bad. It derailed and took the cars in front of it with it.”

A video he took of the toppled train shows several bright red train cars flipped on their side, some with their wheels detached and sitting on the track.

Eldridge’s family was in a car that didn’t flip and were unharmed, he said.

“At this time, we are wholeheartedly focused on providing support for guests and team members in partnership with Stone County first responders,” the park statement said.

Silver Dollar City has not commented on a possible cause of the accident.

A dispatcher at the Stone County Sheriff’s Office declined to comment Wednesday.