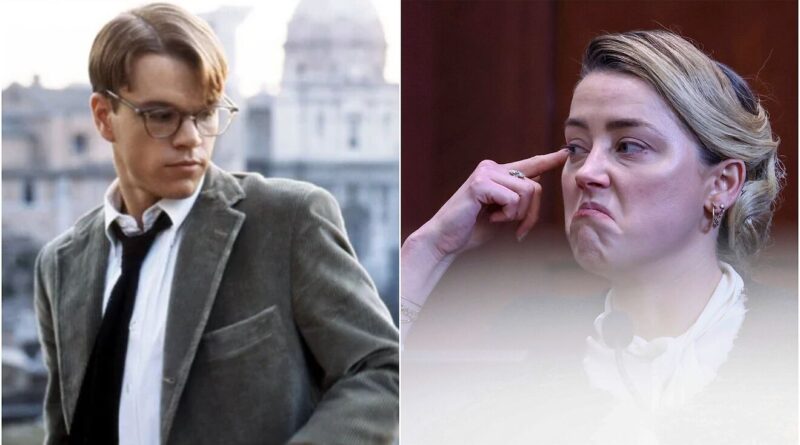 In Amber Heard’s testimony against Johnny Depp, there were odd similarities that were impossible to ignore once you’ve seen her speak more than once. Film buffs caught these strange coincidences instantly but casual fans will need a further detailed explanation.

In 1999, ‘The Talented Mr. Ripley‘ film debuted with rage reviews. It tells the story of a man who is obsessed with the life that another man leads, Matt Damon is the villain of this story and Amber Heard hit all the beats to the entire plot of the film with her description of Johnny Depp. At first, she described the magical moment in which she met Johnny and how enchanting he was at first.

Not so talented: Amber Heard’s attempt to immortalise Johnny Depp as ‘Dickie’ from ‘The Talented Mr. Ripley’ is evidence that her testimony is a fantasy invention worthy of an audition for the movie itself. #johnnydepp #amberheard #JohnnyDeppVsAmberHeardTrial #amberjohnny pic.twitter.com/Zt6U0TAjoQ

This specific line from Marge Sherwood in the film is strangely reminiscent to what Amber Heard talked about Johnny Depp at the beginning of her statement: “The thing with Dickie… it’s like the sun shines on you, and it’s glorious. And then he forgets you and it’s very, very cold. When you have his attention, you feel like you’re the only person in the world, that’s why everybody loves him so much.”

This is exactly the way in which Amber Heard described how enamored she felt with Johnny and then she wen’t on to describe how things changed for the worst. Although the lines are not verbatum, it’s pretty easy to spot these similarities from each speech.

Amber Heard: “When I was around Johnny I felt like the most beautiful person in the world—then he would disappear”

Talented Mr. Ripley: “The thing with Dickie, it’s like the sun shines on you and it’s glorious—then he forgets you and it’s very cold”

Watch the clips side by side pic.twitter.com/WKkvjLfDKL

What probably enrages people who defend Heard the most is that they are starting to realize how much she is hurting women who do suffer from abuse with her lies. This is the latest example of how people with sociopathic tendencies can take a matter to extremes in order to get away with murder even.

In this case, Heard attempted to end Johnny Depp’s livelihood by accusing him of something the actor blatantly denies. By the time the final statements are made, all these lies from Heard will come afloat and put everybody in their place. One more proof that Depp is winning this trial by a landslide.