By HARRIET ALEXANDER and JAMES GORDON

Amber Heard’s insurance company is refusing to cover part of the $8.3million in damages the actress owes ex-husband Johnny Depp following her defamation trial in May.

Heard had a $1 million liability policy with New York Marine and General Insurance Company which she had hoped that might cover at least a portion of the damages bill she needs to settle.

The policy covers wrongful conduct of various sorts including defamation but there is a clause which will likely see the insurance company refusing to pay out, reports TMZ.

Under California law, the state in which the insurance policy was issued, the company claim to be able to refuse the million dollar payout if Heard was found to have committed ‘willful’ misconduct.

The New York Marine Company say that in their determination the judge found the defamation committed by Amber to be both ‘willful’ and ‘malicious’.

The insurance company now want to see the judge declare that they are not going to be on the line to foot part of Amber’s bill based on the policy. 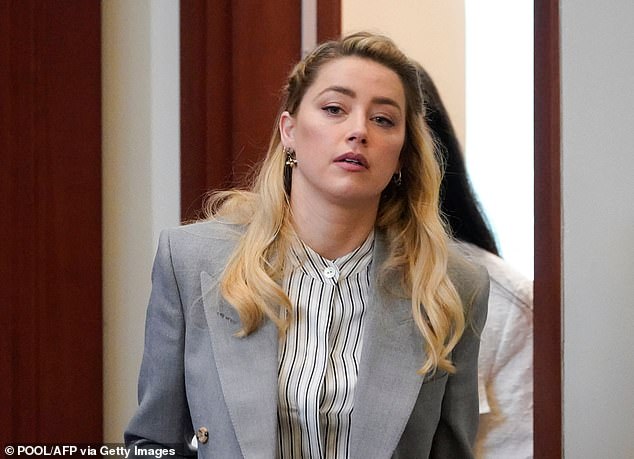 Amber Heard’s insurance company is refusing to cover part of the $8.3million in damages the actress owes ex-husband Johnny Depp following her defamation trial in May

The fallout from the showdown is still rumbling on with Heard’s lawyers on Friday demanding a new trial in her defamation fight claiming the wrong person served on her jury and ruled against her.

Heard’s team filed the court documents in Virginia ‘based on additional discovered facts,’ they said.

Her lawyers allege two people with the same last name lived at the home in Virginia where the jury duty summons was sent in April.

The summons was intended for a 77-year-old person, but instead the 52-year-old showed up in court and served on the jury.

‘It is deeply troubling for an individual not summoned for jury duty nonetheless to appear for jury duty and serve on a jury, especially in a case such as this,’ they write. 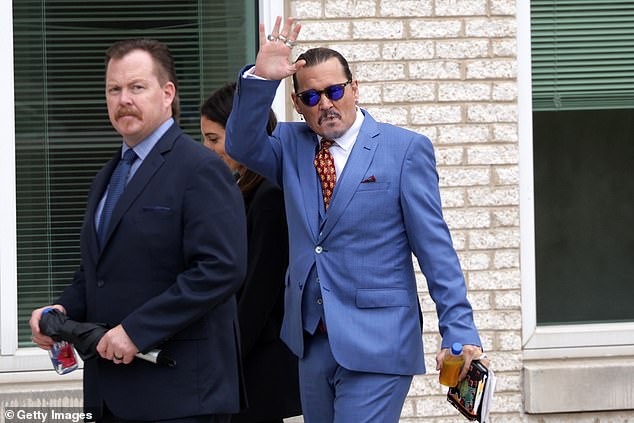 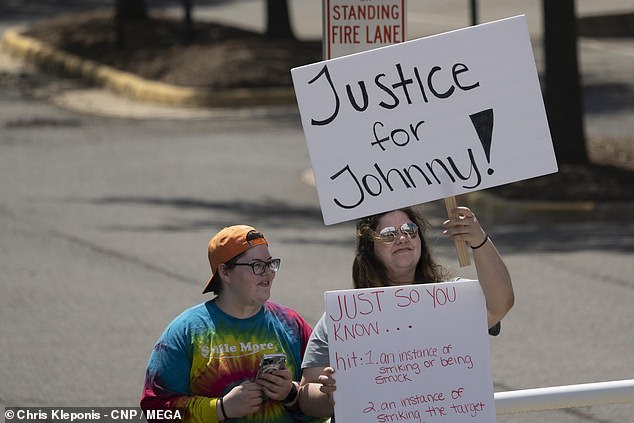 Fans of Depp, 59, are pictured on April 25 outside the courtroom in Fairfax, Virginia

The filing notes that Virginia has safeguards in place to prevent these types of mixups, such as using of a seven-digit juror number, zip code, and birthdate to verify jurors’ identities. 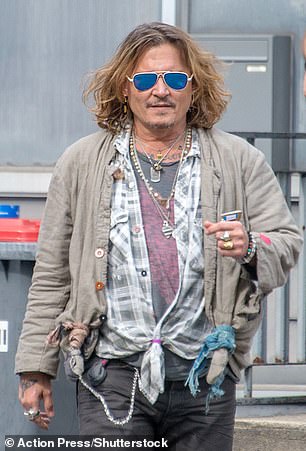 Depp is seen on July 6, on tour with his band in Germany

‘Those safeguards are in place and relied upon by the parties to verify the identity of the correct juror, to ensure due process and a fair trial for all litigants,’ reads the filing.

‘When these safeguards are circumvented or not followed, as appears to be the case here, the right to a jury trial and due process are undermined and compromised.

‘Under these circumstances, a mistrial should be declared, and a new trial ordered.’

The document did not provide any reason for why this allegedly occurred or say how the situation was uncovered.

Friday’s filing comes after the actress’ legal team on July 1 filed claims that the verdict at trial was not supported by evidence presented during the six-week hearing.

The July 1 outlined the issue of the ‘wrong’ Juror 15, but did not go into as much detail as Friday’s document. 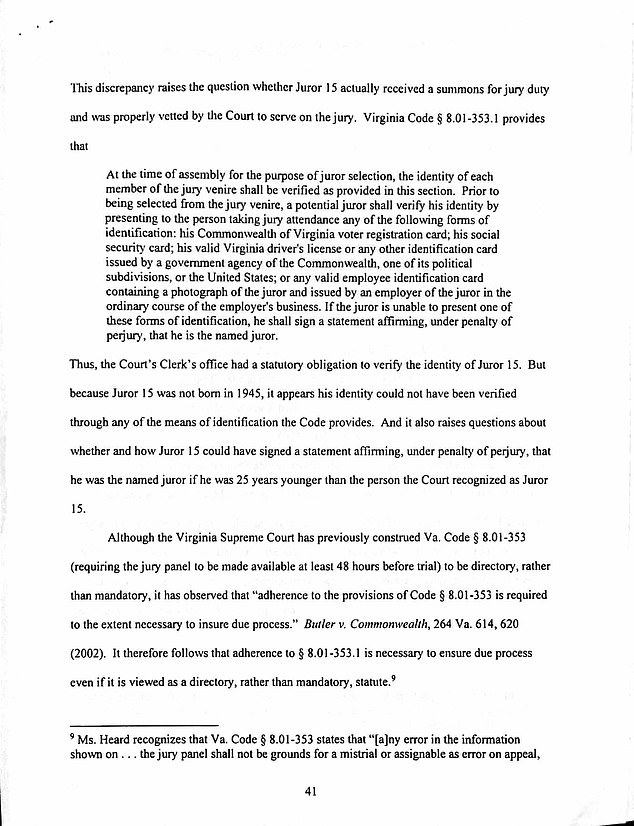 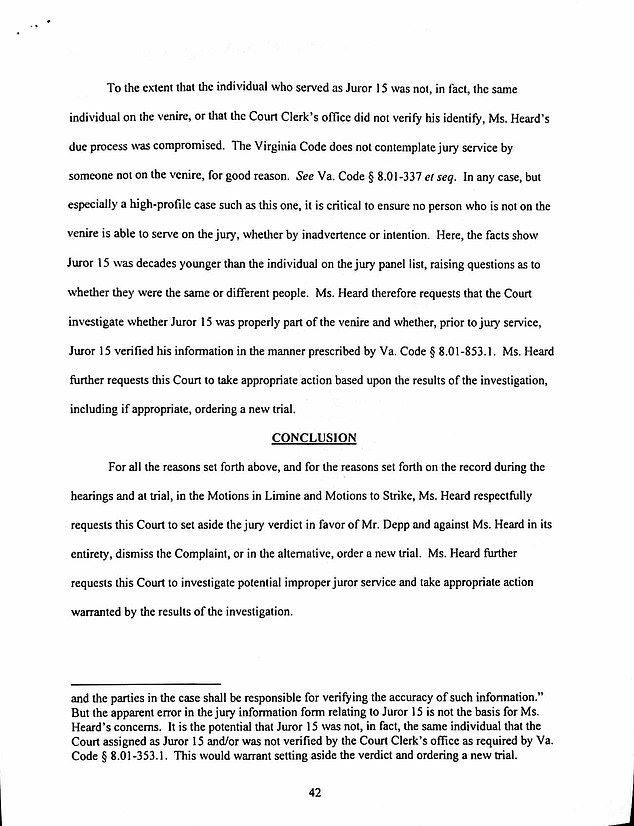 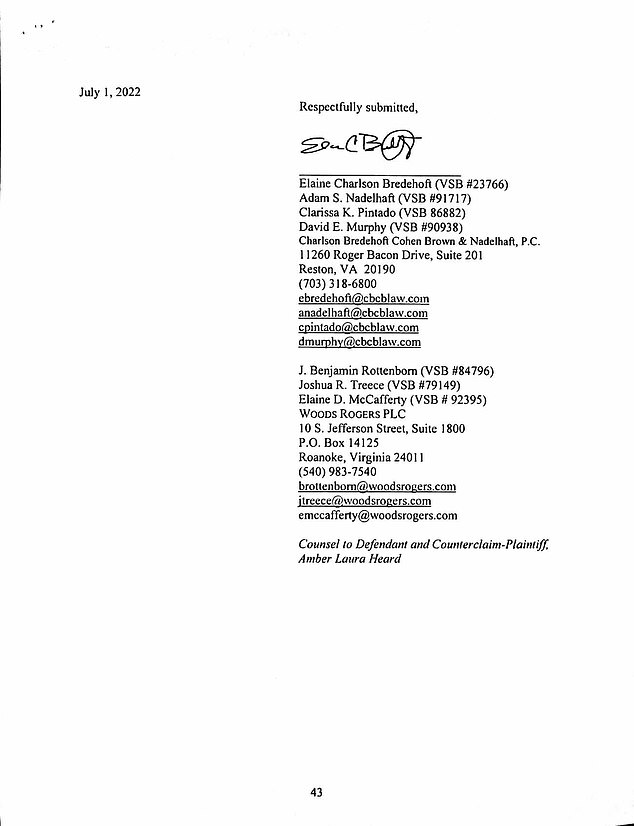 Depp sued his former partner over a 2018 article she wrote for the Washington Post about her experiences as a survivor of domestic abuse, which his lawyers said falsely accused him of being an abuser.

On June 1 the jury ruled in his favor.

Heard’s lawyers also said last week that the judge should throw out the verdict because the amount awarded to Depp — $10 million in compensatory damages and $5 million in punitive damages — was ‘excessive’ and ‘indefensible.’

She was awarded $2 million.