The road to the American Idol finale is long and winding, occasionally diverging into multiple smaller roads. But unlike Robert Frost, we get to take them both.

I’m speaking, of course, about Idol‘s remaining 24 contestants, who have been split into two groups as they sing for America’s votes for the first time this season.

Taking the stage at Disney’s Aulani resort in Hawaii, the first 12 singers performed tonight, while the rest will perform Monday at 8/7c.

Grammy nominee Jimmie Allen — who Idol really wants to take credit for, even though he was cut before the live voting began in Season 10 — served as the contestants’ mentor this week, ironically preparing them to go even further than he did.

So, what did Katy Perry, Lionel Richie and Luke Bryan have to say about the first round of Top 24 singers? Watch the performances and get their thoughts below, then drop a comment with your own favorites from Sunday’s episode. 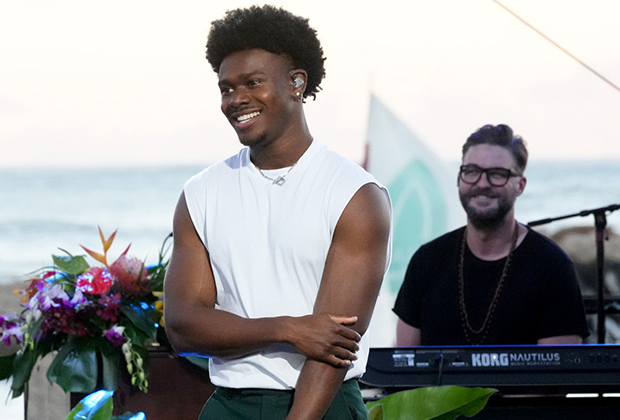 The judges weren’t totally sold on Jay’s song choice (The Jackson 5’s “I Want You Back”), but they agreed that his singing is “off the charts,” boosted by a “ridiculous” vocal range. They’re still wondering what his personal style is, who he is as an artist, but they’re admittedly impressed by his “muscles and football abilities.” Aren’t we all. 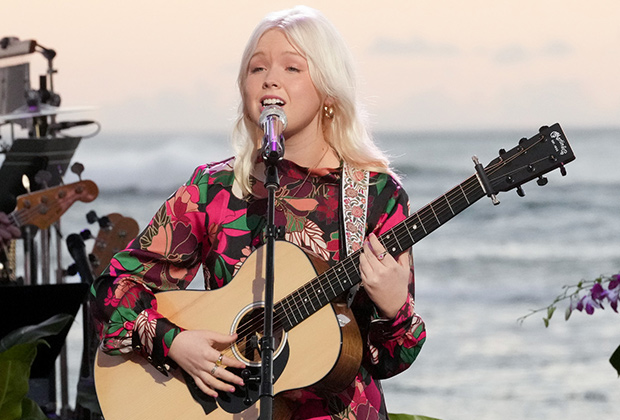 The judges were “transported” by Rowe’s “beautiful, angelic” delivery of Fleetwood Mac’s “Everywhere,” an A+ song choice. That said, her nerves got the better of her, and she missed some of the song’s bigger notes.

There’s no question about Gressett’s ability to entertain a crowd, with the judges likening him to Steven Tyler after his performance of The Beatles/Joe Cocker’s “With a Little Help From My Friends.” They commended him for following his heart, and they encouraged him to never let anyone steer him away from that.

The addition of a live crowd changed everything for Scarlet, who exhibited newfound confidence and control in her performance of Dua Lipa’s “Levitating.” She got off to a quiet start, but she ultimately gave the judges what they’ve been looking for.

Following Sage’s performance of Dolly Parton’s “Jolene,” Perry had a premonition of the “special artistic talent” making it all the way to the Top 5. Perhaps beyond. Let’s see how that pans out, shall we?

Taking on “Best Shot,” a song by the mentor himself, was a bit of a risk — but it paid off for Parker, who was clearly inspired by getting to work with Allen. The performance was hailed as a “great moment on stage,” and Richie declared that he’d just witnessed “the birth of [Parker] as an artist.”

The judges enjoyed Finn’s “cool, jazzy” take on Elton John’s “Your Song,” but they noted that she’s “still not 100-percent” confident on stage, which will come with practice.

Like so many other hopefuls this week, Flora was encouraged to be more confident on stage, because her “tremendous” voice — which was on full display during her performance of Miley Cyrus’ “Angels Like You” — has the power to “pull everybody in.”

All the judges could talk about was how nervous Marshall seemed while singing Bryan Adams’ “Heaven,” specifically how he choked the mic stand… and then choked the microphone. Basically, no inanimate object was safe around him.

Everybody loves a musical journey, so the judges were especially complimentary of the way Moran “rode” his performance of Shawn Mendes’ “In My Blood.” They want him to use more of his heart and less of his head moving forward, but his “incredible, spectacular” voice cannot be denied.

As we saw in her performance of Rascal Flatts’ “Banjo,” this Platinum Ticket recipient clearly knows how to work a crowd. And even though Perry is “not worried” about Huntergirl’s future in the competition, she noted that there were “a couple of pitch issues.” It was a rarity for Huntergirl, but Perry attributed it to her performing without her guitar for the first time.

Bryan called Nicolina “one of, if not the best, singers in the competition,” and how can you disagree? She crushed Sia’s “Elastic Heart,” showing off her powerful pipes while also showing the judges exactly who she would be as an artist.