Officials say 153 more injured, with many being treated for cardiac arrest, after surge in South Korean capital 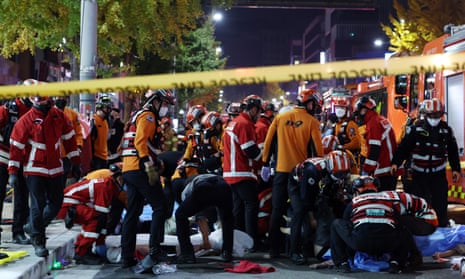 Rescue workers and firefighters at the scene of the crush in Seoul. Photograph: Lee Ji-eun/AP

South Korea’s president has declared a period of national mourning after a Halloween crush killed at least 153 people in a packed nightlife area in Seoul.

At least 153 more were injured when a large crowd pushed forward on a narrow street during festivities in the Itaewon district.

Choi Cheon-sik, an official from the National Fire Agency, said dozens were being treated for injuries at hospitals after the crush in the leisure district of Itaewon on Saturday night.

Officials said it was believed that the people were crushed to death after a large crowd began pushing forward in a narrow alley near Hamilton Hotel, a party spot.

More than 400 emergency workers and 140 vehicles from around the nation, including all available personnel in Seoul, were deployed to the streets to treat the injured. 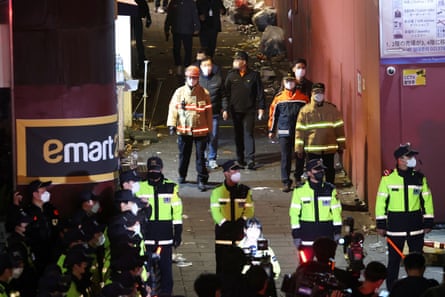 The National Fire Agency separately said in a statement that officials were still trying to determine the exact number of emergency patients.

TV footage and photos from the scene showed ambulance vehicles queued up in streets amid a heavy police presence and emergency workers moving the injured on stretchers. Emergency workers and pedestrians were also seen performing CPR on people lying in the streets.

In one clip, paramedics were seen checking the status of a dozen or more people who lay motionless under blue blankets.

Police, who were restricting traffic in nearby areas to speed up the transportation of the injured to hospitals across the city, also confirmed that dozens of people were being given CPR on Itaewon’s streets. 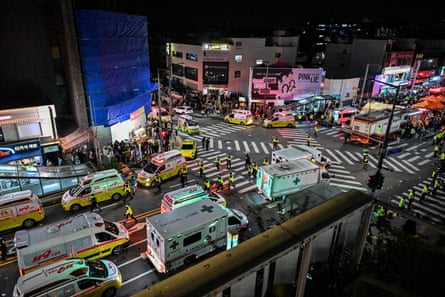 Ambulances at the scene in Itaewon. Photograph: Jung Yeon-Je/AFP/Getty Images

A local police officer said he had also been informed that a crush had occurred on the streets of Itaewon, where a crowd had gathered for the Halloween festivities. The officer requested anonymity, saying the details of the incident were still under investigation.

Some local media reports earlier said the crush happened after a large number of people rushed to an Itaewon bar after hearing that an unidentified celebrity was visiting.

The president, Yoon Suk-yeol, expressed condolences to the victims and wishes for a speedy recovery to the injured.

“This is truly tragic,” he said in a statement. “A tragedy and disaster that should not have happened took place in the heart of Seoul last night.”

Yoon called for officials to ensure swift treatment for those injured and review the safety of the festivity sites. He also instructed the health ministry to swiftly deploy disaster medical assistance teams and secure beds in nearby hospitals to treat the injured.

Local media said about 100,000 people filled Itaewon’s streets for the Halloween festivities, which were the biggest since the start of the pandemic after the easing of Covid-19 restrictions in recent months.

Choi said all the deaths were likely from the crush in a single narrow alley. Many of the victims were women in their 20s, Choi said.

Witnesses described chaotic scenes moments before the crush, with the police on hand in anticipation of the Halloween event at times having trouble maintaining control of the crowds.

Moon Ju-young, 21, said there were clear signs of trouble in the alleys before the incident. “It was at least 10 times more crowded than usual,” he told Reuters.

Social media footage showed hundreds of people packed in the narrow, sloped alley crushed and immobile as emergency officials and police tried to pull them free.

Other footage showed chaotic scenes of fire officials and citizens treating dozens of people who appeared to be unconscious.

Fire officials and witnesses said people continued to pour into the narrow alley that was already packed wall-to-wall, when those at the top of the sloped street fell, sending others below them toppling over others.

An unnamed woman who said she was the mother of a survivor said her daughter and others were trapped for more than an hour before being pulled from the crush of people.

A Reuters witness said a makeshift morgue was set up in a building adjacent to the scene. About four dozen bodies were carried out on wheeled stretchers and moved to a government facility to identify the victims, according to the witness.

The Itaewon district is popular with young South Koreans and expatriates alike. Its dozens of bars and restaurants were packed on Saturday for Halloween after businesses had suffered a sharp decline over three years of the pandemic.

“You would see big crowds at Christmas and fireworks … but this was several 10-folds bigger than any of that,” Park Jung-hoon, 21, told Reuters from the scene.

Foreigners were among those transferred to nearby hospitals.

British prime minister Rishi Sunak tweeted: “All our thoughts are with those currently responding and all South Koreans at this very distressing time.”

US secretary of state Antony Blinken tweeted: “We send our thoughts and deepest condolences to the family and friends of the deceased and injured, as well as to the people [of South Korea] as they mourn this horrific tragedy.”

With the easing of the Covid pandemic, curfews on bars and restaurants and a limit of 10 people for private gatherings were lifted in April. An outdoor mask mandate was dropped in May.

Authorities said they were investigating the exact cause of the incident.

President Yoon Suk-yeol presided over an emergency meeting with senior aides and ordered a taskforce be set up to secure resources to treat the injured and to launch a thorough investigation into the cause of the disaster.

Saturday’s deaths will likely draw public scrutiny of what government officials have done to improve public safety standards since the ferry disaster.

This was the deadliest crushing disaster in South Korean history. In 2005, 11 people were killed and around 60 others were injured at a pop concert in the southern city of Sangju.