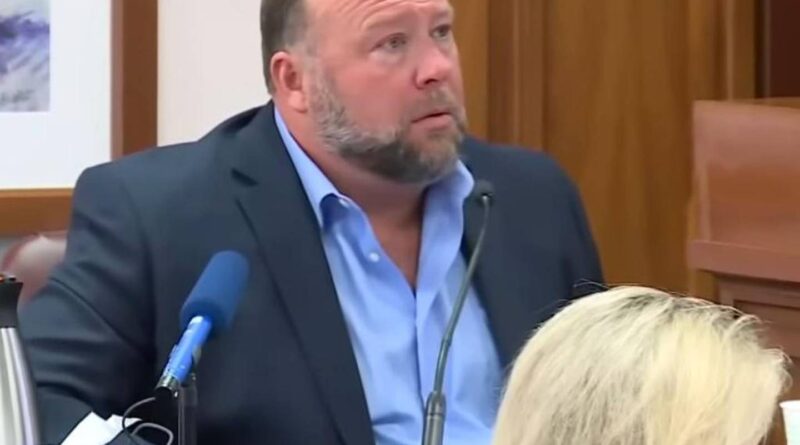 Conspiracy theorist Alex Jones was left gobsmacked in court today after learning hundreds of text messages from his phone had apparently been accidentally sent to the lawyers who are suing him.

For years, the bombastic, far-right Infowars founder ranted to his millions of followers that the 2012 Sandy Hook Elementary School shooting was a hoax, that children weren’t killed and that parents were crisis actors in an elaborate ruse to force gun control.

But under oath and facing a jury that could hit him with US$150 million ($238m) or more in damages for his false claims, Jones said in court today he now realises that was irresponsible and believes that what happened in the deadliest school shooting in American history was “100% real”.

Then Jones found himself apparently caught in another lie on the stand in the Texas courtroom after he learned his lawyers had accidentally sent hundreds of his texts on the school shooting to the opposing side.

The 48-year-old had claimed for years he had found no texts or emails about the Sandy Hook killing. He continued to take that line while under oath today, until lawyer Mark Bankston produced evidence of the hundreds of texts he received from Jones’ own lawyers, the New York Post reports.

Jones’ lawyers apparently mistakenly sent a digital receipt of every text message Jones sent about the Sandy Hook massacre over the past two years, to Bankston. 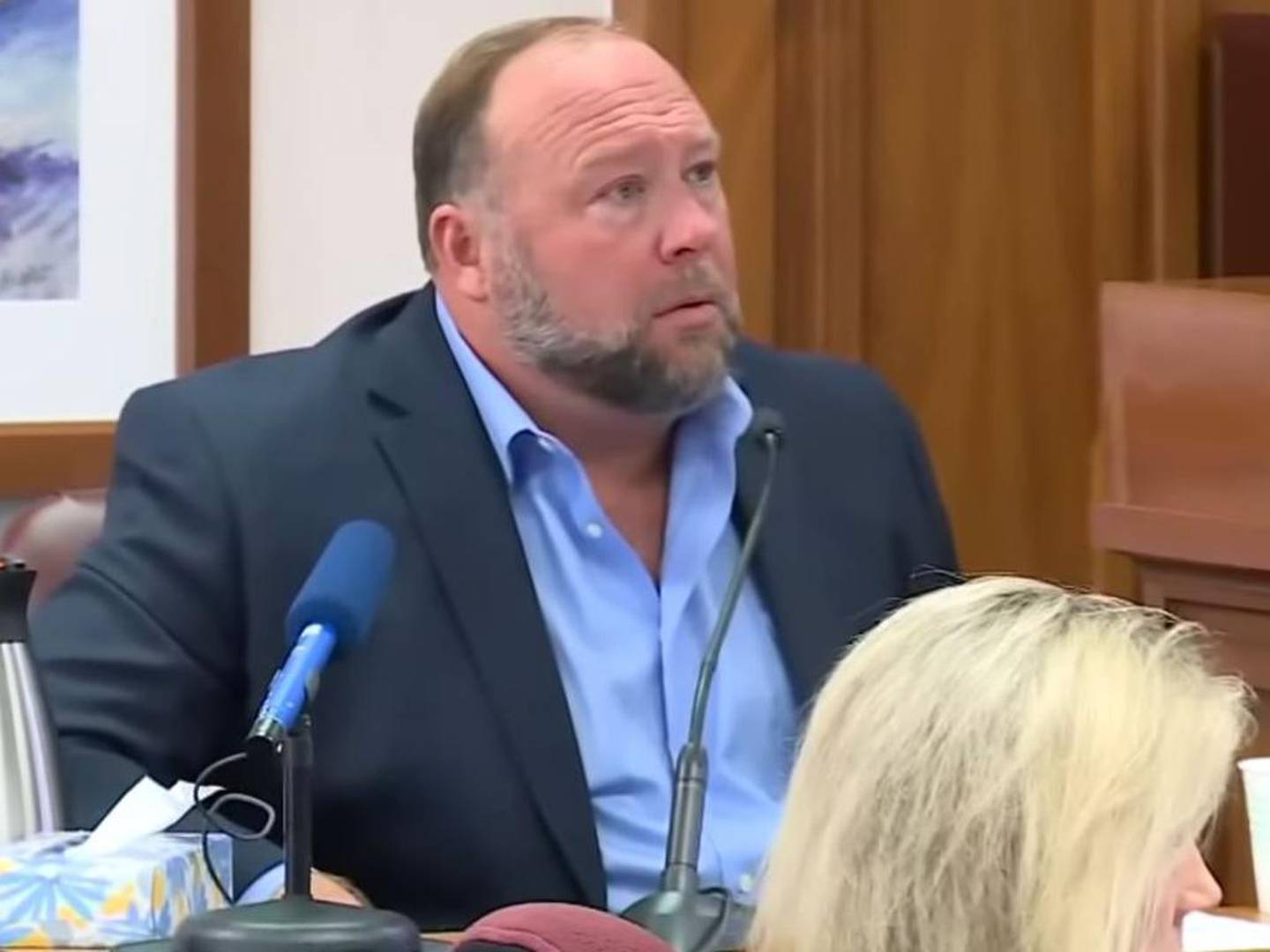 Alex Jones learned his lawyers had accidentally sent hundreds of his texts on the Sandy Hook shooting to the opposing side.

When Bankston told Jones this in court, he was left momentarily speechless.

“Do you know what perjury is?” Bankston asked Jones, who answered that he did.

And shortly after Jones declared “I don’t use email,” he was shown one that came from his address, and another one from an Infowars business officer telling Jones that the company had earned US$800,000 gross in selling its products in a single day, which would amount to nearly US$300 million in a year.

Alex Jones testifies in court to say that Sandy Hook is 100% real. He’s said it numerous times in the past and that it was irresponsible for him to say otherwise, but the media won’t let him walk it back. pic.twitter.com/NH8hGFO8Zc

The bombshell admissions came on the final day of testimony in a two-week defamation lawsuit against him and his Austin-based media company, Free Speech Systems, brought by Neil Heslin and Scarlett Lewis, the parents of 6-year-old Jesse Lewis. Their son was a first grader who was among the 20 students and six teachers killed at Sandy Hook in Newtown, Connecticut, on December 14, 2012.

“I unintentionally took part in things that did hurt these people’s feelings,” said Jones, who also acknowledged raising conspiracy claims about other mass tragedies, from the Oklahoma City and Boston Marathon bombings to the mass shootings in Las Vegas and Parkland, Florida, “and I’m sorry for that.”

But an apology isn’t enough for Heslin and Lewis. They said Jones and the media empire he controls and used to spread his false assertions must be held accountable.

The parents testified Tuesday about a decade of trauma, inflicted first by the murder of their son and what followed: gun shots fired at a home, online and telephone threats, and harassment on the street by strangers, all fuelled by Jones and his conspiracy theory spread to his followers via his website Infowars.

A forensic psychiatrist testified the parents suffer from “complex post-traumatic stress disorder” inflicted by ongoing trauma, similar to what might be experienced by a soldier at war or a child abuse victim.

At one point in her testimony, Lewis looked directly at Jones, who was sitting across the room.

Courts in Texas and Connecticut have already found Jones liable for defamation for his portrayal of the Sandy Hook massacre as a hoax involving actors aimed at increasing gun control. 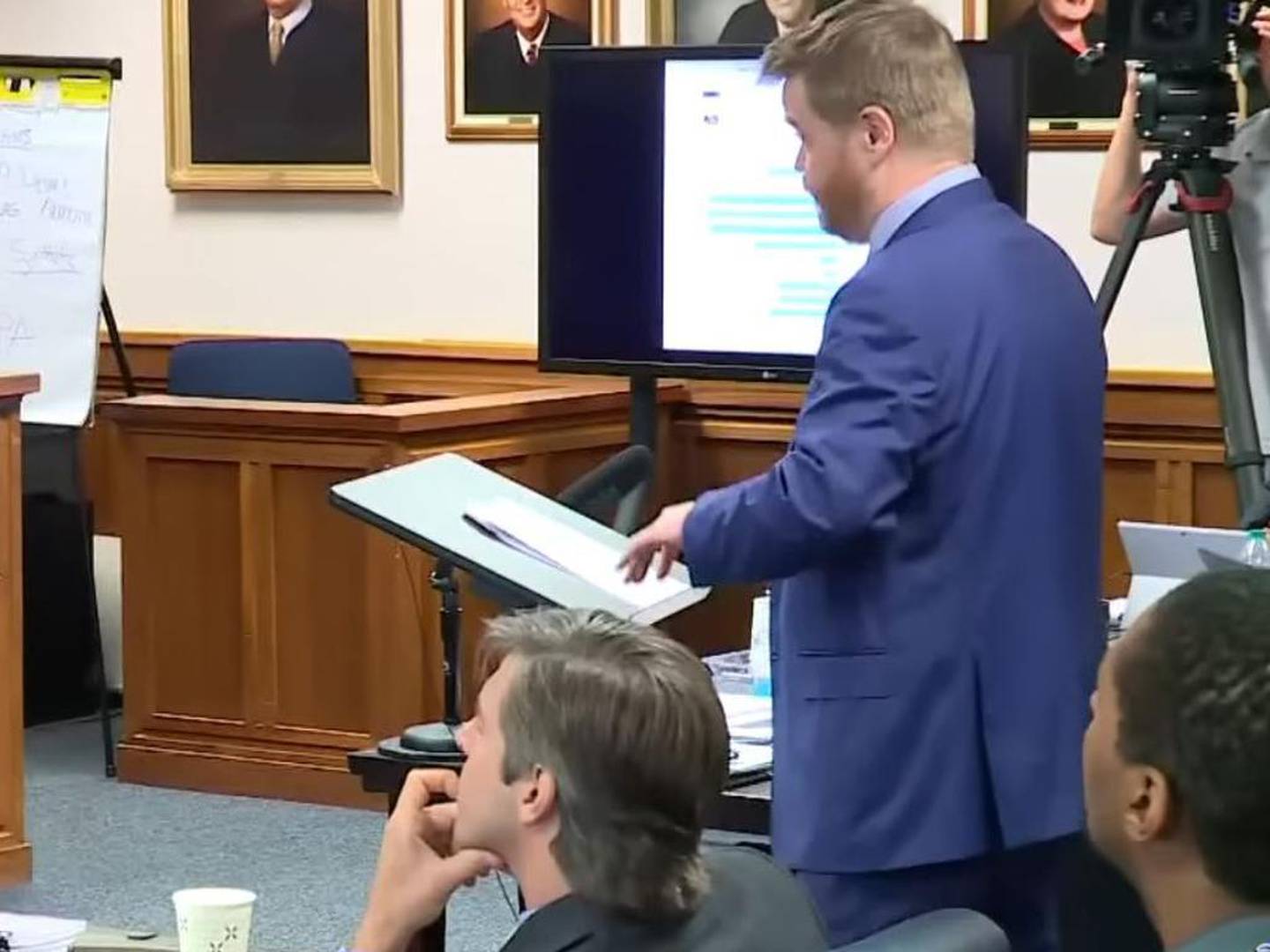 Mark Bankston received a digital receipt of every text message Alex Jones sent about the Sandy Hook massacre over the past two years.

Now, Heslin and Lewis are asking the jury in Austin for US$150m in compensation for defamation and intentional infliction of emotional distress. They will also ask the jury to assess additional punitive damages.

Jurors began considering damages today. Once they determine whether Jones should pay the parents compensation for defamation and emotional distress, they must then decide if he must also pay punitive damages. That portion will involve a separate mini-trial with Jones and economists testifying to his and his company’s net worth.

Jones’ lawyer asked the jury to limit damages to US$8 — one dollar for each of the compensation charges they are considering — and Jones himself said any award over US$2 million “would sink us.”

At the end of Jones’ testimony, Bankston pulled a crumpled dollar bill out of his pocket, showed it to Jones, and put it down in front of the parents.

“The day Sandy Hook happened, Alex Jones planted a seed of misinformation that lasted a decade,” parents’ lawyer Kyle Farrar told the jury in closing arguments. “And he just watered that seed over and over until it bore fruit: cruelty and money.”

During his testimony, Jones said he’s tried in the past to back off the hoax claims, but “they [the media] won’t let me take it back.”

Jones — who has been banned from major social media platforms for hate speech and abusive behaviour — has portrayed the lawsuit as an attack on his First Amendment rights and complained that he’s been “typecast as someone that runs around talking about Sandy Hook, makes money off Sandy Hook, is obsessed by Sandy Hook.”

Eight days of testimony included videos of Jones and Infowars employees talking about the Sandy Hook conspiracy and even mocking Heslin’s description in a 2017 television interview that he’d held his dead son Jesse’s body “with a bullet hole through his head”. Heslin described that moment with his dead son to the jury.

Pay attention to all of the right wingers tonight who aren’t coming to Alex Jones’ rescue on social media because they know they’ve communicated with Alex Jones via email and/or text in the past three years.

Jones was the only witness to testify in his defence. And he came under withering attack from the plaintiff’s lawyers under cross examination, as they reviewed Jones’ own video claims about Sandy Hook over the years, and accused him of lying and trying to hide evidence, including text messages and emails about Sandy Hook. It also included internal emails sent by an Infowars employee that said “this Sandy Hook stuff is killing us.”

Jones has already tried to protect Free Speech Systems financially. The company filed for federal bankruptcy protection last week. Sandy Hook families have separately sued Jones over his financial claims, arguing that the company is trying to protect millions owned by Jones and his family through shell entities.