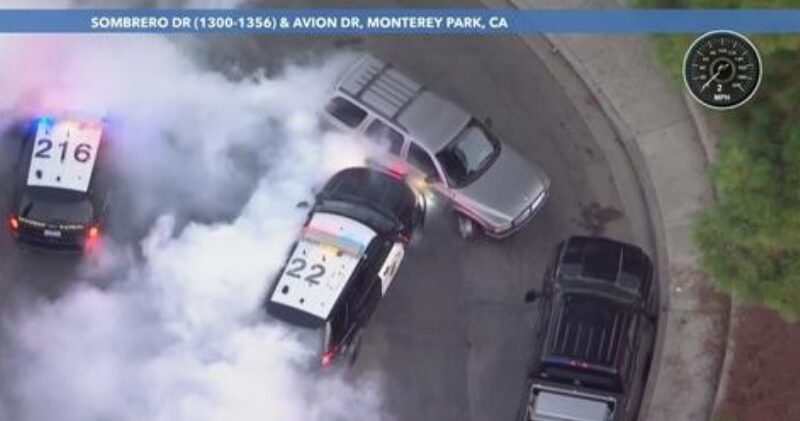 CHP pinned a stolen SUV on a cul-de-sac in Monterey Park after a chase through Los Angeles County Friday evening.

LOS ANGELES (KABC) — A chase through the East Los Angeles area and the San Gabriel Valley ended with the suspect being taken into custody after a dramatic standoff Friday evening.

California Highway Patrol officers dragged the male suspect out of the driver’s seat of the SUV and arrested him on a cul-de-sac in a Monterey Park neighborhood just before 7 p.m.

AIR7 HD was over the pursuit just before 6 p.m. as the suspect was on the 10 Freeway approaching Monterey Park.

The suspect drove at moderate speeds for most of the chase on multiple freeways, including the 10 and 710, and on surface streets in East L.A. and in the San Gabriel Valley.

During the chase, the SUV lost a tire after a spike strip attempt and authorities narrowly missed performing a successful PIT maneuver.

The suspect made his way to a residential area and entered a cul-de-sac located in the area of Sombrero and Avion drives, where CHP units managed to box in the vehicle about 6:35 p.m. However, the suspect refused to surrender and attempted to flee in the pinned-in vehicle, sending large plumes of smoke into the cul-de-sac, shredding the remaining tires and eventually causing smoke to emerge from beneath the hood of the vehicle, disabling it completely.

CHP officers equipped with a ballistic shield approached the SUV, broke the driver’s side window and forcefully removed the suspect, who was taken into custody just before 6:50 p.m.

Eventually authorities got the suspect out of the car and arrested him after a roughly 15-minute standoff.