Chilling 911 audio has captured the moment that Alabama corrections officer Vicky White told her jailhouse lover “let’s get out and run” moments before investigators say she fatally shot herself in the head.

The audio, released on Tuesday night, reveals the 56-year-old’s final moments and the last words she said to Casey Cole White, the 38-year-old convict who she allegedly helped break out of jail and went on the run with for 10 days.

The Whites, who are not related or married and are said to have been in a relationship for the last two years, were finally tracked down to Evansville, Indiana, on Monday following a huge, national manhunt.

Following a brief police car chase, officers rammed the couple’s Cadillac off the road into a ditch.

White surrendered to authorities and was taken into custody while Ms White was found suffering a gunshot wound to the head. She was rushed to hospital where she died from her injuries hours later. 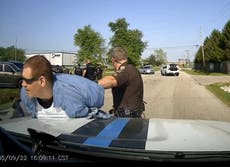 On Tuesday night, the Vanderburgh County Coroner ruled Ms White’s death a suicide and said that the autopsy found she had died from a self-inflicted gunshot wound to the head.

During the police chase, a 911 call was made from the fugitive’s vehicle. It is not clear if it was the inmate or the corrections officer who initially placed the call.

At the start of the seven-minute audio, the dispatcher is heard saying “911” and “hello” while Ms White is heard speaking in the background saying “oh my god” and “stop, stop”.

“The airbags are going to go off,” she cries, sounding panicked.

“Airbags are going off. Let’s get out and run,” she says, as sirens are heard ringing out in the background.

Seconds later, officers rammed the couple’s Cadillac off the road into a ditch and Ms White allegedly shot herself.

No voices are heard for some time before a man is later heard saying “her finger is on the trigger” – as the call continues in the aftermath of the crash.

Here is part of the just released 911 call that was made during the Vicky and Casey White pursuit. You can hear what appears to be Vicky say “Airbags are going off. Lets get out and run.”
More on Banfield at 10ET on @NewsNation. pic.twitter.com/m2P0bXgE8C

Separate bodycam footage has revealed that officers found a limp Ms White inside the vehicle suffering from a gunshot wound and with the firearm still in her hand.

The bodycam, taken from the bodyworn camera of a first responder arriving on the scene of the crash, shows officers commenting that Ms White is still clutching the gun in her hand.

“She’s still got it in her hand,” one officer says.

“What the gun in her head?” another replies.

The first officer responds: “Yes, there… finger’s on the trigger.”

Officers first take the gun from her hand, before pulling her from the vehicle and administering first aid.

The release of the bombshell audio and police footage came as officials faced questions over whether it could have been her jailhouse lover who pulled the trigger.

Immediately after his arrest, White told officers that he was innocent of causing Ms White’s injuries, according to US Marshals.

“Y’all help my wife, she shot herself in the head and I didn’t do it,” he allegedly said.

The Whites were not married, officials have confirmed.

No law enforcement officers opened fire during the encounter with the fugitives.

Vanderburgh County Sheriff Dave Wedding said on Tuesday that the couple were planning to have a shootout with police officers but were stopped from doing so after being rammed off the road by officers.

A trove of weapons including at least four handguns, a semiautomatic gun and an AR-15 were found inside their vehicle, along with around $29,000 in cash and multiple red and blonde wigs.

White was sent back to Alabama on Tuesday night after waiving his right to extradition that morning.

He appeared in Lauderdale County Courthouse in Florence where he was charged with escape in the first degree.

As he was led in and out of the courthouse he ignored members of the media who asked him if he had any remorse for the death of the woman who gave up her home, job and life to go on the run with him.

Vanderburgh County Sheriff Dave Wedding said at a press conference on Tuesday that White had shown no remorse for Ms White’s death.

His latest charge will be added to an already long rap sheet, as he is scheduled to stand trial in June for the 2015 stabbing murder of 58-year-old mother Connie Ridgeway – a crime he has previously confessed to.

He is already serving a 75-year sentence after being convicted of a crime spree in both Alabama and Tennessee that involved him shooting one person and holding six at gunpoint.

The Marshals Service said White had threatened to kill his ex-girlfriend and her sister and previously said that he wanted to be killed by police.

The net closed in on the Whites after 10 days on the run which saw the couple cross through at least four states and change getaway vehicles at least four times.

A nationwide manhunt was first launched back on 29 April when Ms White picked the inmate up from Lauderdale County jail at around 9.30am claiming that she was taking him for a mental health evaluation at Lauderdale County Courthouse.

She told her coworkers that once she had escorted him to court she was going to seek medical attention for herself as she felt unwell.

The pair never arrived at the courthouse and officials later learned that White had no scheduled court appearance or appointments that day.

Ms White’s 2013 Ford Taurus patrol car was found abandoned in the parking lot of a shopping centre not far from the jail at around 11am that day.

But several more hours passed before the pair fell under suspicion.

At around 3.30pm that afternoon, Ms White’s coworkers grew concerned that she hadn’t returned and they were unable to reach her by phone.

It was only then that they also realised that White had also not returned to jail.

With Ms White now dead, many questions remain unanswered around both the shock prison escape and the alleged suicide of the 56-year-old widow who had a two-decades-long “exemplary” career.

Sheriff Singleton said that the couple had been in what he described as a “jailhouse romance” or “special relationship” for the last two years.

He said that there is evidence that they had been in contact since 2020 when White was transferred out of the county jail after he was rumbled plotting another prison escape.

Ms White allegedly communicated with him by phone before the inmate was then transferred back to the local jail in February.

On his return, White had received special treatment from the corrections officer including being given extra food on his trays, officials said.

Ms White had also sold her home just five weeks earlier for well below its market value, withdrew $90,000 in cash from her bank accounts and filed for retirement days before the pair vanished.

Her last day of work was the day she disappeared, though her retirement papers had not been finalised.

After selling her home, she moved in with her mother who previously said that she knew nothing about her daughter’s plans to retire and had never heard her speak of White.

In the early aftermath of the prison escape, Ms White was described as an “exemplary employee” who had repeatedly won employee of the year awards.