Buffalo Bills safety Damar Hamlin is showing what doctors describe as “substantial improvement” following his cardiac arrest on the field during Monday Night Football. On Thursday, they said he was “beginning to awaken” and communicate in writing, and on Friday, the team shared that Hamlin’s breathing tube had been removed and he is able to speak.

The 24-year-old NFL player collapsed during a game against the Cincinnati Bengals. He spent the days that followed in critical condition in the intensive care unit at the University of Cincinnati Medical Center.

Dr. Timothy Pritts of UC Health said Thursday it appears Hamlin’s “neurological function is intact,” and that he’d marked “a turning point” in his care, but challenges still remain.

“We have significant concern about him after the event that happened on the field. He is making substantial progress,” said Pritts.

The Buffalo Bills said in a statement earlier that day that the player has “shown remarkable improvement over the past 24 hours.” 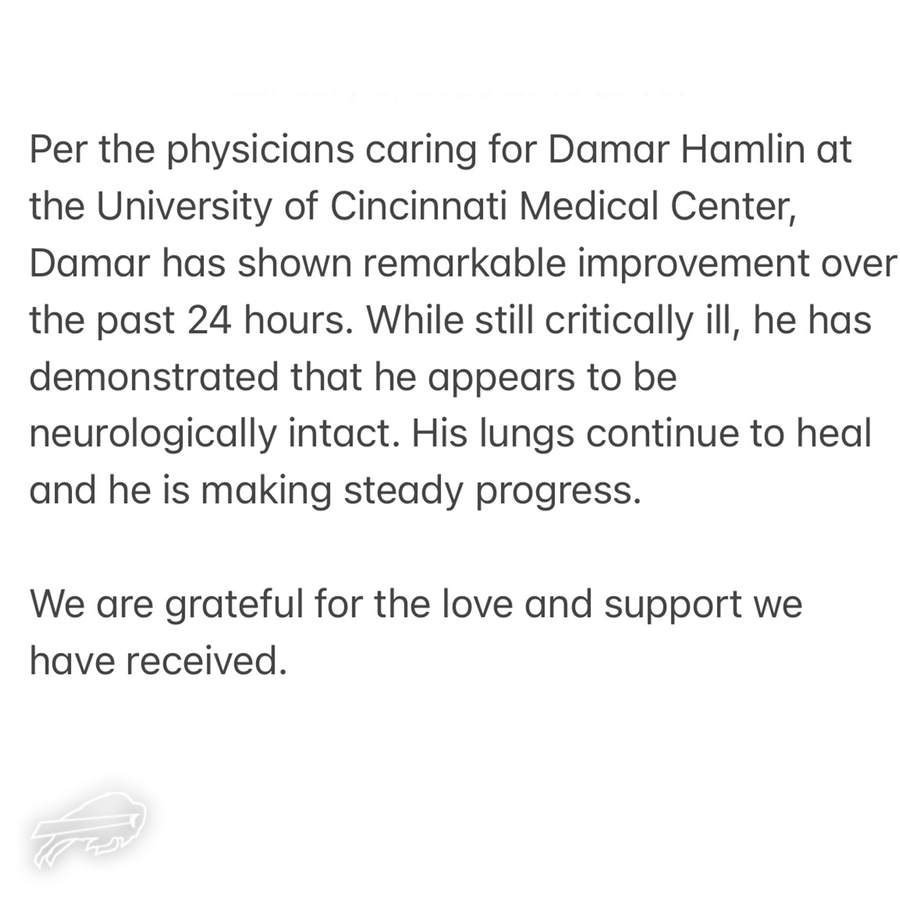 Hamlin’s uncle, Dorrian Glenn, spoke to reporters outside the University of Cincinnati Medical Center on Tuesday night and said his nephew’s heart stopped twice, once on the field and again at the hospital, CBS Chicago’s Charlie De Mar reported. Glenn also said Hamlin had lung damage and needed a ventilator to help him breathe.

Damar Hamlin’s uncle says his nephews heart stopped twice. Once on the field and again at the hospital.

He says he was watching the game on tv from home in Pittsburgh and rushed to the hospital in Cincinnati.

“His lungs continue to heal and he is making steady progress,” the Bills said Thursday.

In a Friday morning update, the team said Hamlin’s breathing tube had been removed overnight and he was able to speak to family and his care team. The Bills tweeted that Hamlin had joined a meeting of players and coaches via FaceTime and told his teammates, “Love you boys.”

Damar Hamlin FaceTimed into our team meeting today to talk to players and coaches.

What he said to the team: “Love you boys.” ❤️ pic.twitter.com/8dorrWNaxt

What happened in the Monday Night Football game?

With 5:58 to go in the game’s first quarter, Bengals wide receiver Tee Higgins, who was running the ball, hit Hamlin, a 24-year-old safety, in the chest with his helmet during a play. Hamlin dragged Higgins down to the ground. Hamlin stood up right after — but a few seconds later, collapsed.

Medical personnel attended to Hamlin for 19 minutes on the field, The Associated Press reported, and Hamlin received both CPR and required an automated external defibrillator. CBS Sports reported he was placed on a stretcher, then put in an ambulance, where he was given oxygen, to be taken to the hospital.

The remainder of the game between the Buffalo Bills and Cincinnati Bengals was postponed.

The Bills said early Tuesday that Hamlin had suffered cardiac arrest and his heartbeat was restored on the field, and he was transferred to the University of Cincinnati Medical Center for further testing and treatment. He was sedated and listed in critical condition, the team said.

Damar Hamlin suffered a cardiac arrest following a hit in our game versus the Bengals. His heartbeat was restored on the field and he was transferred to the UC Medical Center for further testing and treatment. He is currently sedated and listed in critical condition.

In an update Wednesday, the team tweeted that Hamlin “remains in the ICU in critical condition with signs of improvement noted yesterday and overnight. He is expected to remain under intensive care as his health care team continues to monitor and treat him.”

Damar remains in the ICU in critical condition with signs of improvement noted yesterday and overnight.

He is expected to remain under intensive care as his health care team continues to monitor and treat him.

Fans rallied outside the hospital following Hamlin’s injury, and donated millions of dollars to Hamlin’s effort to buy Christmas toys for children from his hometown of McKees Rocks, Pennsylvania, outside Pittsburgh.

What is “commotio cordis”?

While doctors said Thursday it’s too early to say if Hamlin experienced “commotio cordis,” as many have speculated, CBS News medical contributor Dr. David Agus said Hamlin may have suffered the rare condition, which is heart arrhythmia that occurs when someone takes a direct hit to their chest.

Agus said approximately 30 cases of commotio cordis occur in the U.S. every year, including among Little League players who get hit in the chest with a ball.

Describing the condition as “a confusion of the heart,” where the heart muscle pumps erratically, Agus said the energy of the blow interferes with the electrical signals in the heart, creating a new beat known as ventricular fibrillation — a fast, erratic heartbeat that does not pump blood into the brain. When that happens, Agus said the heart needs to be shocked back into regular rhythm.

“That’s why there are defibrillators on the sidelines of games, is to be able to use them to shock the best heart back into a regular rhythm,” he said.

Agus said every minute blood flow is stopped to the brain increases the potential of severe consequences — including death.

“Every minute you wait is basically 10% increase likelihood of death — so the quicker you do it, the better,” he said.

There is a question of whether Hamlin suffered any injury to his brain from his heart stopping. The faster they were able to get his heart started, Agus said, the more likely it is he will recover quickly.

“People who don’t even know us are showing love and support and we’re so thankful for that,” Glenn, the player’s uncle, said. “I know those prayers are helping because he’s definitely recovering. … God got a mission for him and that’s why he’s still here.”