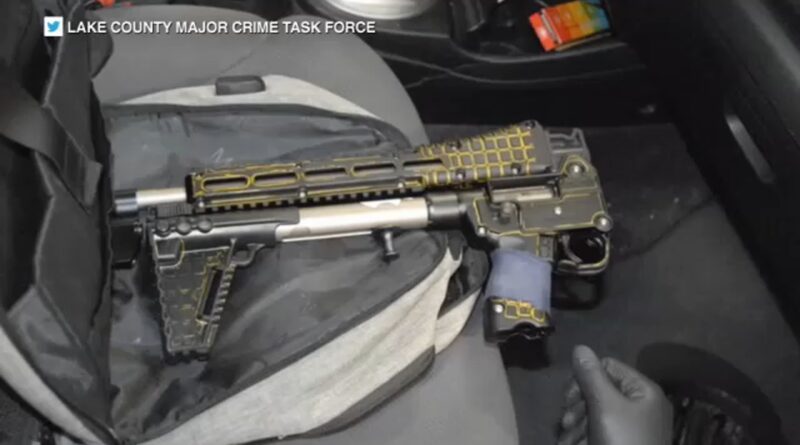 Robert Crimo, the Highland Park parade shooting suspect, will be held without bond on murder charges after confessing, a prosecutor said.

WAUKEGAN, Ill. (WLS) — The suspect in the Highland Park parade shooting that left seven people dead and dozens injured will be held without bond, a judge determined Wednesday morning. 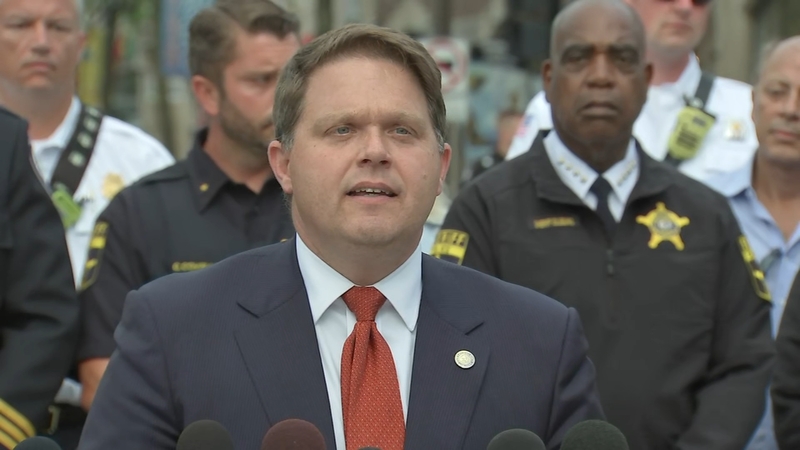 If convicted, Crimo would be given a mandatory life sentence without the possibility of parole, according to Rinehart.

Crimo appeared via Zoom before a judge Wednesday morning wearing a solid black T-shirt, his face betraying no emotion as a prosecutor said “he looked down his sights, aimed and opened fire at people across the street” while positioned on a rooftop overlooking the Highland Park July 4 parade. 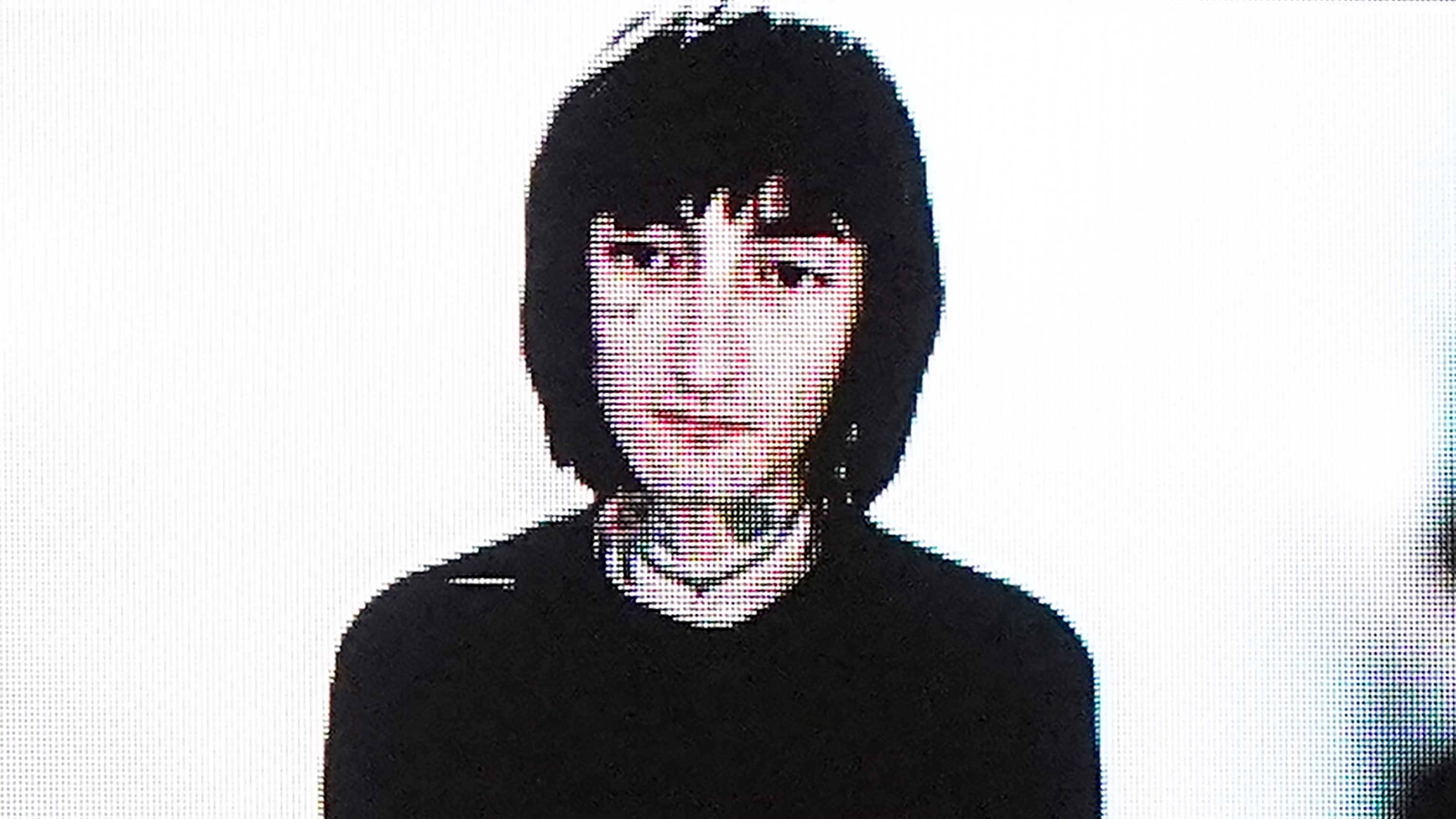 A witness reported seeing an individual with a gun on the rooftop of a building who was “scanning the ground with a gun and saw muzzle flashes come from the roof,” assistant state’s attorney Ben Dillon said.

Prosecutors read aloud the names of victims as they recited the bare facts of the case.

Dillon said Crimo was spotted running from the scene with a black bag over his shoulder. An object wrapped in cloth fell out of the bag and onto the pavement.

“The individual left that object and kept running,” Dillon said.

The object was a Smith and Wesson MNP 15 semi-automatic rifle, Dillon said.

Officials said Crimo then went to his mother’s house and borrowed her 2010 Honda Fit, which he drove to the Madison, Wisconsin, area before returning to Illinois, where he was spotted and arrested.

While in Madison, Crimo allegedly told investigators that he came across another holiday event and contemplated a shooting there before his capture in Illinois, police said.

The Lake County Major Crimes Task Force released a photo of the gun recovered in the car when Crimo was taken into custody. 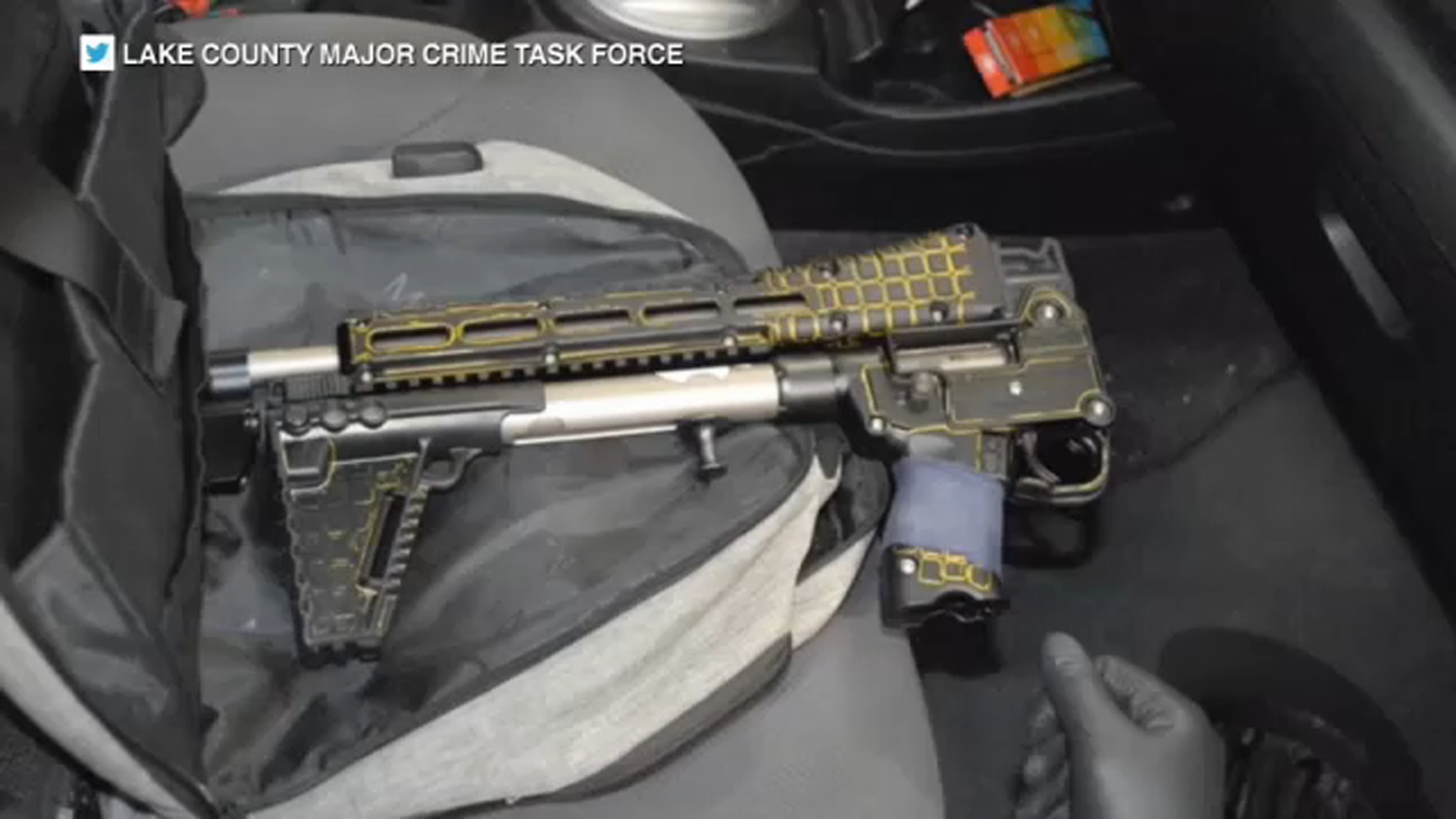 The Lake County Major Crimes Task Force released a photo of the gun recovered in the car when accused Highland Park shooter Robert Crimo III was taken into custody.

“It appears when he drove to Madison he was driving around; however, he did see a celebration that was occurring in Madison, and he seriously contemplated using the firearm he had in his vehicle to commit another shooting,” Lake County Major Crimes Task Force spokesman Chris Covelli said.

He told police he turned around and came back because he didn’t do enough research on the event in Madison.

Barnes added the Madison Police Department “has recognized this concern for years, has trained for these incidents, and has adjusted our staffing of large events accordingly.” 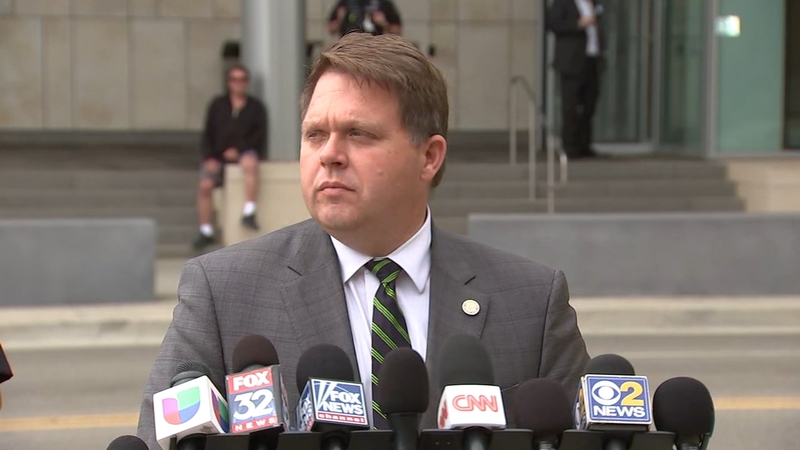 Covelli said Crimo disposed of his phone in the Madison area of Middleton, where it has since been recovered by authorities.

Covelli also said that Crimo has “some type of affinity towards the number 4 and 7… that apparently comes from some music he is interested in,” but added that they will not speculate to a motive regarding the shooting.

The prosecutor said Crimo made a voluntary statement confessing to the attack, telling police he “dressed up like a girl and covered his tattoos with makeup because people recognized him.”

On the rooftop, police discovered three empty 30-round magazines and 83 spent shell casings. 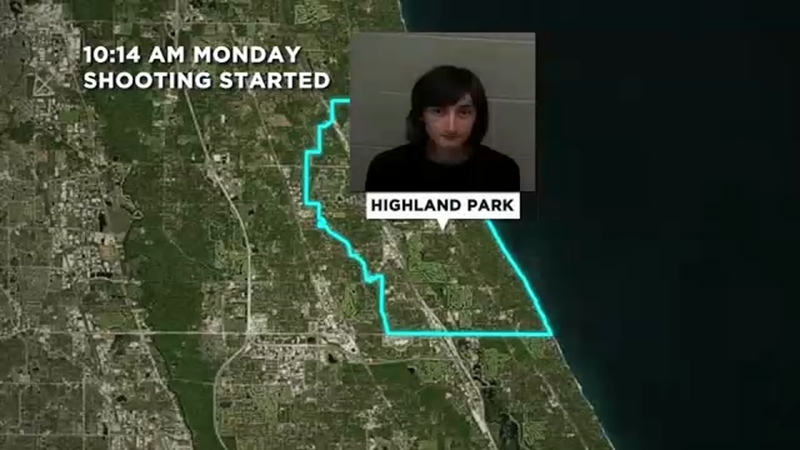 Asked by Judge Theodore Potkonjack whether he had hired a lawyer, Crimo replied “No, I do not have a lawyer.”

The judge appointed public defender Gregory Ticsay and allowed the two to speak privately in a breakout Zoom chatroom.

Highland Park investigators also revealed Tuesday that Crimo planned the attack for weeks in advance and purchased the rifle he used legally.

Crimo was arrested in Lake Forest Monday night after an hours-long manhunt.

Video shows a person of interest in the Highland Park parade shooting being placed into custody after a brief chase.

A second AR-15-style rifle was in the car, which investigators believe was also purchased legally. They also found multiple handguns in the Highwood home where Crimo lived with his uncle.

Lake County sheriff’s officials listed off the weapons Crimo has legally purchased over the years.

His uncle, Paul Crimo, said there were no warning signs before the attack.

“The parents are distraught. They are people who have lived in this community all their lives,” the family attorney, Steve Greenberg, said.

Greenberg said that the accused shooter’s parents were friends with many who attended the parade, and “knew some of the people who, unfortunately, fell victim to senseless violence,” adding that they’ve also “lost a son.”

The attorney added that this “isn’t the parent’s fault. This is the fault of the young man who was allowed by the system that’s out there to buy military-grade assault rifles.” 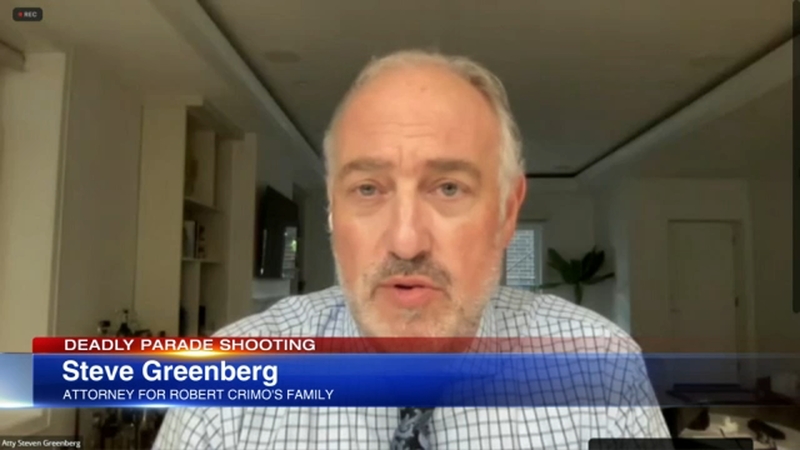 The attorney says Crimo’s parents are suffering along with everyone else.

Crimo’s parents released a statement through their attorney Tuesday, saying: “We are all mothers and fathers, sisters and brothers, and this is a terrible tragedy for many families, the victims, the paradegoers, the community, and our own. Our hearts, thoughts, and prayers go out to everybody.”

“The parents request that all respect their privacy as they try to sort thru this tragedy.”

Police said Tuesday Crimo was involved in two prior incidents in Highland Park, the most recent in September 2019 when a family member called police to report he had a knife collection and “was going to kill everyone,” authorities said. Police removed knives from Crimo’s possession.

Months earlier, in April 2019, someone called police one week after learning Crimo tried to kill himself, police said. Police spoke with Crimo and his parents and learned mental health professionals were handling the situation.

“There was no probable cause to arrest. There were no complaints that were signed by any of the victims,” Covelli said Tuesday.

Officials said three months after the second incident, Crimo obtained a firearm owners ID card after being sponsored by his father. Illinois State Police said “there was insufficient basis to establish a clear and present danger and deny the FOID application.”

Authorities said the weapon used in the July 4 shooting was purchased after those incidents.

Crimo’s parents have not been charged in connection with the shooting.

A resident of Highwood for the last two years, Crimo lived in the back apartment of an uncle’s home, who said his nephew had recently lost his job at a local Panera. He last saw him the day before the shooting.

“Hi, bye. Yeah, he was fine. Everything was normal,” Paul Crimo said. “It’s hard. It’s — I can’t even believe it. And, I mean, I feel sorry for all the other families that lost their lives. My heart goes out to them and I just feel very bad.”

‘At what point do we say enough?’ Highland Park mayor says 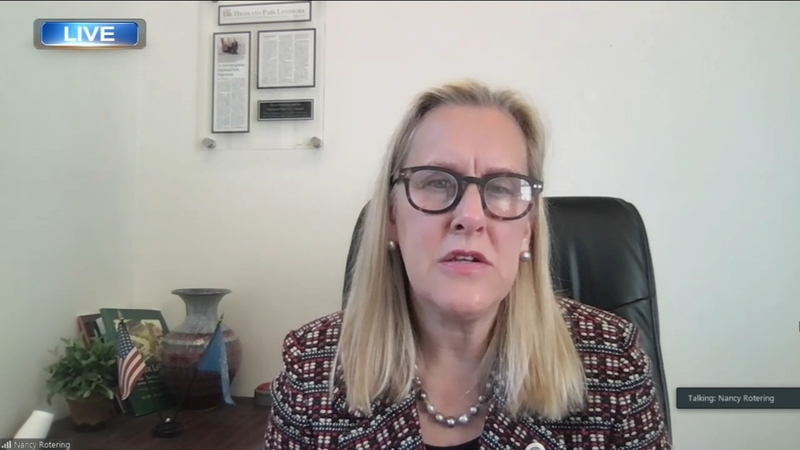 U.S. Attorney General Merrick Garland said Wednesday that the shooting took place just 20 minutes from the house he grew up in, saying he knows the area “extremely well.”

“It’s just another horrific reminder of the violence and gun violence that we face and we must do everything in our power to end,” Garland said. “We don’t need any more reminders of this.”

ABC News contributed to this report.