Eliza Fletcher is a pre-kindergarten teacher and married mother of two who was abducted in the City of Memphis, Tennessee, while jogging in the early morning hours of September 2, 2022. 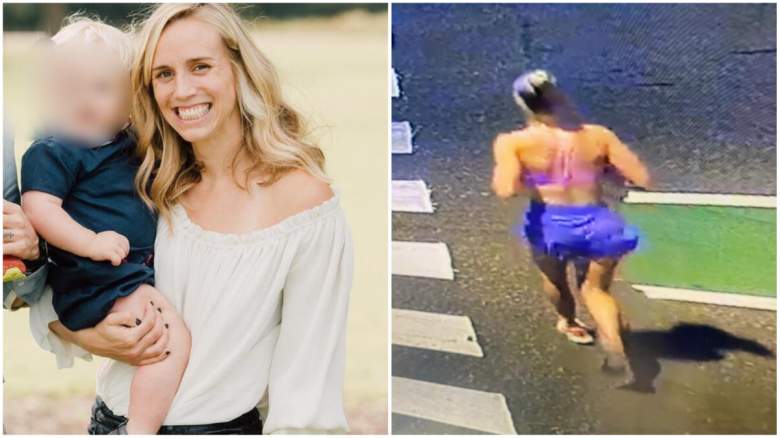 Fletcher, 34, goes by the name Liza Fletcher on Facebook, but authorities gave her name as Eliza Fletcher. She is from a prominent Memphis family, the granddaughter of a well-known philanthropist and business owner. There is a major search effort underway to find her.

Fletcher was forced into a mid-sized dark-colored SUV, Memphis police wrote in a news release. Police are actively searching for the missing woman, who was taken near the University of Memphis campus.

University of Memphis police said in a safety alert that Fletcher was kidnapped. Fletcher regularly “runs on Central Avenue,” they wrote, and she was “reported missing after not returning home” at 7 a.m. Her “cell phone and water bottle were discovered in front of a house in the 3800 block of Central that is owned by the University.”

The phone was smashed, according to Action News 5.

The alert says that a “male approached her at approximately 4:30 a.m. in the middle of Central Avenue and appeared to leave with her in an unknown vehicle following a brief struggle.” Police figured this out by obtaining surveillance video showing the abduction.

1. Police Released a Photo of Fletcher, Who Works as a Teacher, Jogging Shortly Before She Was Abducted

Fletcher is listed as a teacher at St. Mary’s Episcopal School under the name Liza Fletcher.

They said Fletcher is a white female, 5 foot 6 inches tall, 137 pounds, with brown hair, green eyes, hair in a bun, a pink jogging top and purple running shorts. The suspect was described as an unknown male. People with information are encouraged to call the Memphis Police Department at 901-545-COPS (2677). Others have described her hair as blonde.

Police gave additional details in a statement posted to Facebook:
At approximately 7:45 am, officers were dispatched to assist the University of Memphis police regarding a missing person that occurred in the area of Central and Zach Curlin.

Upon arriving on the scene, officers were advised that a female was jogging in the area at approximately 4:20 am when an unknown individual approached her. The female was reportedly forced into an SUV and taken from the scene. The suspect was possibly in a dark color SUV traveling westbound on Central.

In a short news conference, Memphis police said that the University of Memphis called the Memphis Police Department, and initially they were “handling possibly a missing person.”

Police then found video that showed a black SUV pull into the area across the street “where the victim was taken,” the police spokeswoman said. The video showed Fletcher was abducted, she said.

The suspect has not been identified.

Police said they were not aware of a connection to a dark SUV harassing members of the University of Memphis women’s cross country team.

They also have not indicated any connection between Fletcher’s abduction and the kidnapping of a young mother and child by gunpoint at a Memphis Target store on Wednesday. In that case, however, the victims were released after they withdrew $800 out of an ATM.

2. Police Obtained a Photo of the Possible Suspect SUV

Memphis police have released photos of the possible suspect SUV. Here’s another photo of it. However, they have not released any description of the kidnapper.

“Officers have been able to obtain video of the possible suspect’s vehicle,” Memphis police wrote. They have only released still photos from it, however, and they have not released the specific make or model of the vehicle.

In one Facebook group, people claim you can see what might be a masked face or dog through the windshield when the photo is enlarged. 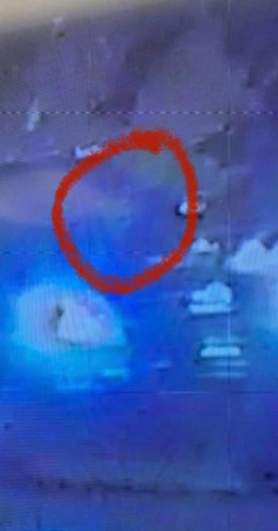 A woman wrote on the Fox 13 television station’s Facebook comment thread on the case that her sister drove a similar vehicle that was stolen between midnight and 3 a.m. on the morning in question. It’s not clear whether it’s the same vehicle, though, although the comment writer believes it was. 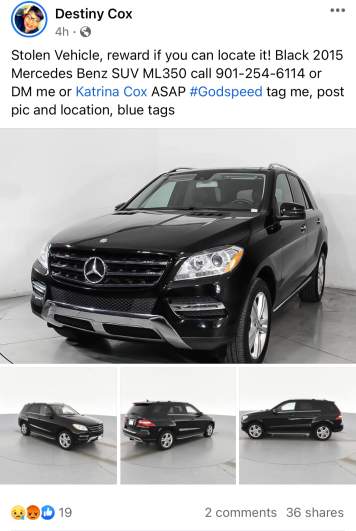 The sister later posted on Facebook that her Mercedes SUV was stolen.

3. Loved Ones Say Liza Fletcher, an Avid Runner, Qualified for the Boston Marathon; They Are Asking for the Community’s Help

Family members wrote on Facebook that Fletcher was abducted, and they are asking for the community’s help in finding her.

“Liza Fletcher is my niece and she was abducted this morning while jogging on Central near the U of Memphis campus around 4:30 am. She was forced into a dark SUV. If you have seen her or have any of info please call 911,” her aunt, Jennifer Sink, wrote on Facebook. Sink works as the chief legal officer for the City of Memphis at Memphis City Attorney’s Office.

A friend wrote in a Facebook group devoted to finding Fletcher: “She is an avid runner, mother and teacher. She qualified for the Boston Marathon. You can’t teach, raise children and train all in regular business hours. She is a phenomenal amazing woman who needs our help, not any judgment.”

Hutchinson School posted, “Hutchison family, we ask that you please join us in praying for the safe return of Liza Wellford Fletcher ’06. She was abducted this morning near the University of Memphis while running. She is a beloved alumna, and we pray for her safety and for her family.”

4. Fletcher Showcased Pictures of Her Family on Social Media & Wrote About Her Love of True-Crime Podcasts

On her Facebook page, Fletcher showcased photos of her husband, Richie Fletcher, and their two young children. Her most recent post, in 2021, other than a profile picture of her family, reads, “Need a new general practitioner. Can someone recommend a good, easy to get an appointment of Dr or NP?”

Other photos show her wedding.

Fletcher’s Facebook posts were similarly typical. “I need tv show recommendations…? I’m up for older shows or newer ones,” read one. In one post, she told her friends she was looking for a new true-crime podcast.

She also wrote about running: “Long distance runners, what do you think is the best form of cross training?”

She wrote, “Best podcasts to listen to while running. I liked serial, up and vanished and dr death. I enjoy the happy hour and I’ll have another.”

Her Instagram page is filled with photos of her husband and kids, biking, family trips and so forth. She wrote recently on Instagram,
The boys woke me with handmade cards, balloons and breakfast. I love my family. I am an imperfect mother. Everyday I am working to move from rigidity to flexibility, shame to grace, perfection and criticism to acceptance and gratefulness. I want to be a mom that is a safe place for the boys to feel, be themselves and fail while learning. As a raise these boys I am reteaching my inner child at the same time. Gotta give a shout out to @fletch_livves who goes through this process with me and loves me at the same time. #surrender

@fletch_livves is the Instagram page of her husband, Richie Fletcher, a long-distance bicycle rider. In March, he wrote on Instagram, “8 years in the making with this smoking hot babe! Wouldn’t want it any other way.”

In February, Richie Fletcher wrote, “The boys and I had a blast chasing Mom around the mountains as she ran her first 50k trail run!”

5. Fletcher Is From a Well-Known Memphis Family & Is Active in Church

According to the Commercial Appeal, Fletcher is from a well-known family in Memphis. She is “the granddaughter of the late Joseph ‘Joe’ Orgill III,” described by the publication as a “Memphis hardware businessman and philanthropist who has supported causes including Dixon Gallery and Gardens and Church Health.”

Orgill’s obituary says he left behind nine grandchildren at the time of his death.

The magazine described Fletcher as “a ‘natural’ girl — outdoorsy, athletic, and warm — and the plans for her wedding emanated from her personality and style.” The story noted that Fletcher’s parents, “Adele and Beasley Wellford, were happy to be able to give their daughter the woodland-themed wedding she envisioned.” 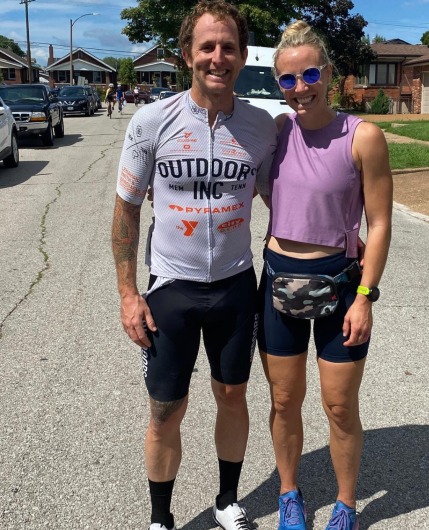 The story continued, “The wedding ceremony was held at nearby Second Presbyterian Church, which was indeed where the happy couple met; the officiant was Reverend Mitchell Moore. Echoing the naturalistic theme, Liza’s elegant wedding gown by Austin Scarlett was painted with pale mauve flowers.”

George Robertson, the senior pastor at Second Presbyterian Church, told the Commercial Appeal, “She and her husband Ritchie are both very active and great leaders in our congregation. They have two little boys who have come up to me every week and give me a hug.”

Who Is Eliza Fletcher? Memphis Teacher and Mom of Two Abducted and Bundled into SUV During Early Morning Jog

Mom of Missing Teen Kiely Rodni, 16, Shares Their Last Conversation: ‘I Knew Something Was Wrong’