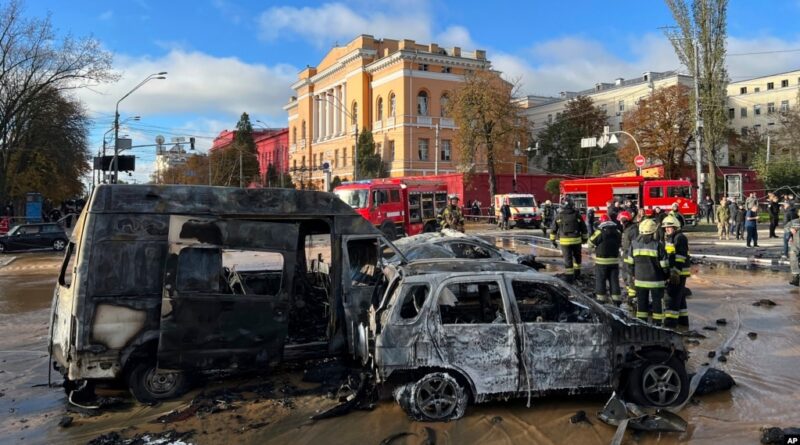 Rescue workers survey the scene of a Russian attack on Kyiv on the morning of October 10.

The Ukrainian capital, Kyiv, appeared to be under attack early on October 10 as several explosions shook the city, with the emergency services saying that a number of people were killed and wounded in the blasts.

Reports of explosions came also from other Ukrainian cities — Dnipro, Lviv, and Ternopil — according to Ukrainian media.

Kyiv Mayor Vitaliy Klitschko said on Telegram that the blasts hit the center of Ukraine’s capital.

“Several explosions in the Shevchenskivskiy district — in the center of the capital,” Klitschko said on the Telegram messaging app. “Details later.”

The blasts appeared to be targeting more central parts of Kyiv compared with Russian strikes on the city earlier in the war, in what looks like the first missile attacks on the Ukrainian capital in many months.

Ukrainian lawmaker Lesia Vasylenko posted a photo on Twitter showing that at least one explosion occurred near the main building of the Kyiv National University in the center of the capital.

Svyatlana Vodolaga, the spokesperson for the Emergency Service in Kyiv told the AP news agency that people have been killed and wounded. Rescuers are now working in different locations, Vodolaga said.

Ukrainian President Volodymyr Zelenskiy earlier said that Russia’s latest attack on civilian targets in the southern Ukrainian city of Zaporizhzhya that killed 14 people and left scores wounded, including children, was an act of “terrorism at state level,” which proved that it is impossible to negotiate with Russia.

Zelenskiy’s statement came shortly after Russian President Vladimir Putin himself blamed Ukrainian intelligence for the recent attack on the 18-kilometer bridge linking Moscow-annexed Crimea with mainland Russia, calling it an “act of terrorism.”

Putin and the head of Russia’s Investigative Committee have blamed, without evidence, the attack on the $3.6-billion bridge over the Kerch Strait on Ukrainian special forces.

“The constant terrorism against the civilian population is Russia’s obvious rejection of real negotiations,”Zelenskiy said in a video message late on October 9. “Terrorism at the state level is one of the worst international crimes.”

Ukrainian officials in Zaporizhzhya said that nine rockets fired by Russian forces overnight on October 8-9 killed 14 people in two apartment buildings and dozens of private homes and wounded 70, including 11 children.

The nearby Zaporizhzhya nuclear power plant is located southwest of the city in territory Moscow seized early in the war.

“It was a deliberate blow. The one who gave the order and those who carried it out knew where to hit,” Zelenskiy said in his video message.

However, Kim wrote on telegram that “according to preliminary data, there were no victims.”

Ukrainian forces have continued to make gains in a weeks-long counteroffensive in the south and northeast that has led Russian forces to retreat in many areas.

Natalya Humenyuk, a spokeswoman for Ukraine’s southern military command said on October 9 that “as of today, from the beginning of the counteroffensive, over 1,170 square kilometers have been liberated in the Kherson direction.”

“Work is continuing on consolidation of territory, clearing it, and conducting stabilizing operations, as the settlements we enter contain many surprises left by the occupiers,” she told Ukrainian TV.

Britain’s Ministry of Defense said in its daily intelligence update on October 10 that “Ukrainian forces “continue to place pressure on Russian forces both in the northeast and in Kherson Oblast in the south.”

Find out more about the UK government’s response: https://t.co/2ShOubaSWD

However, British intelligence said that Moscow continues to prioritize its operations in eastern Ukraine, mainly around Bakhmut, in the Donetsk region, where Russian forces were coming closer to breaking into the city, which has sustained very extensive damage from bombardment.

Russian losses have continued after Moscow announced last month that it was annexing the Ukrainian regions of Kherson, Zaporizhzhya, Donetsk, and Luhansk partially held by Russian forces.

On October 8, Russia-imposed authorities in the Kherson region said they were facing “a difficult period” and authorized a partial evacuation in the face of the Ukrainian counteroffensive.

After what Russian officials called a truck bombing took out one lane of the highway section of the Crimea Bridge and damaged the rail section, Moscow made changes to the command of its war effort in Ukraine and the security of key infrastructure in Crimea, with Putin putting the FSB — the successor to the Soviet-era KGB — in charge of the effort.

Kremlin spokesman Dmitry Peskov said that Putin will chair a meeting with his Security Council in Moscow on October 10.

With reporting by dpa, AP, and Reuters