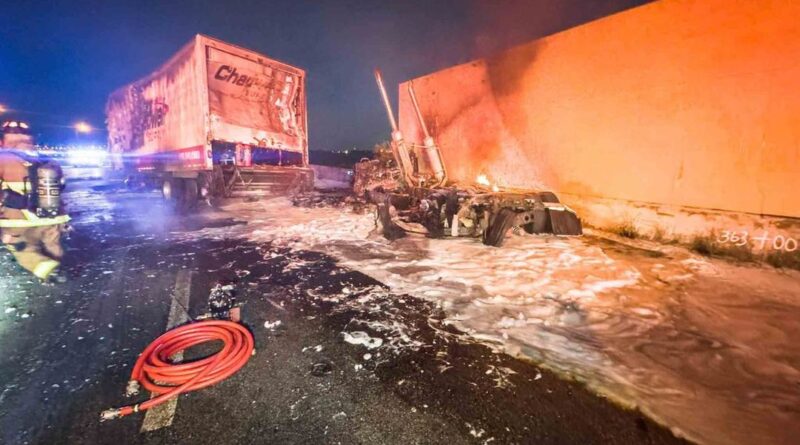 JACKSONVILLE, Fla. – The northbound side of the Buckman Bridge was shut down Friday morning because of a fiery crash involving two tractor-trailers.

WATCH: Press play above for a live look at the scene as crews clean up after the fiery crash

One of the semis had “Hazmat material” on it, and because firefighters used water to douse the blaze, the city’s biohazard team was called in to make sure the material doesn’t run off into the St. Johns River, according to a Jacksonville Fire and Rescue spokesperson.

NB Buckman Bridge closed because of an accident with fire. Traffic is being diverted onto San Jose. At least 1 SB lane was also closed due to smoke.

Capt. Eric Prosswimmer said no one was transported from the crash, which was at the beginning of the northbound side of the bridge.

He said a semi hit another tractor-trailer that had been left on the bridge from a previous wreck Thursday night.

Both trucks burned in the crash Friday morning.

Crews are working a traffic accident northbound in the Buckman bridge involving 2 semi trucks…. One is fully involved in fire and all lanes are blocked…expect delays

The smoke was so bad at one point that it closed one of the lanes on the southbound side of the bridge also.

Traffic from I-295 on the northbound side is being diverted onto San Jose Boulevard before the bridge.