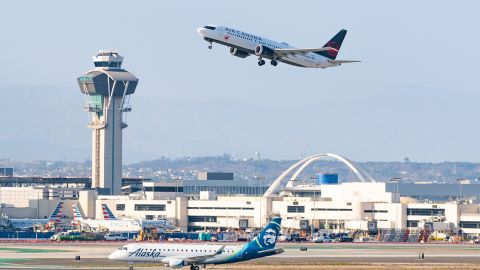 The terminal was cleared of passengers due to a hazardous materials investigation, the airport tweeted on Monday.

Carbon dioxide from an unidentified source is cited in the LAFD report of the incident at the LAX Terminal 8 baggage area.

Three people are in “mild distress,” according to the report, while one person is listed in “grave condition.”

“Though no escalating or off-site hazard has been identified, an LAFD Hazardous Materials team has been assigned pursuant to protocol,” the alert posted online says.

The Federal Aviation Administration issued a ground stop for United Airlines as a result of the emergency. Terminal 8 primarily services United flights.

Terminal 8 remained closed as of about 11:45 a.m. ET (8:45 a.m. PT), according to a tweet from the airport. Fire crews were still on the scene to check for hazardous material, the airport said.

“Once they clear the area as safe passengers will be allowed back inside,” the tweet said.

Dankers said all TSA employees are OK, and the incident does not involve a TSA checkpoint.

Due to a hazardous materials investigation by @LAFD terminal 8 is being cleared of passengers. Please follow instructions from first responders and follow us for updates.

“Please check with your airline for updates on flights,” LAX airport tweeted.