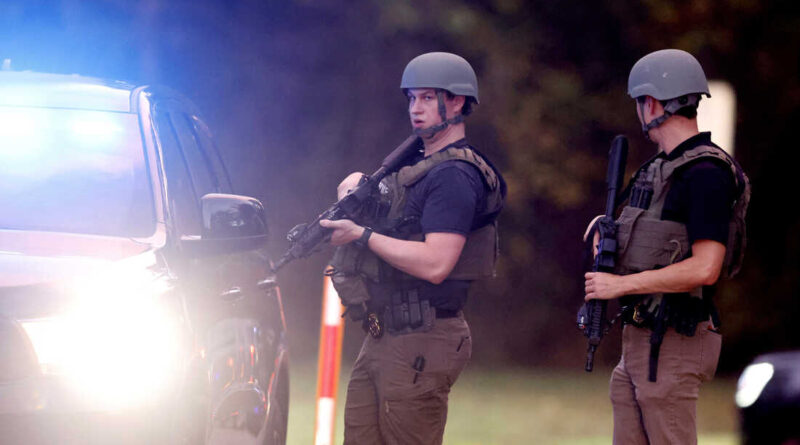 RALEIGH, N.C. (AP) – Callers who dialed 911 during a fatal North Carolina shooting rampage described encountering bodies on the streets or front yards of their neighborhood and along a trail popular with runners and bikers, according to newly released recordings.

The 911 calls released late Friday by the Raleigh Police Department illustrate the chaos of the scene on Thursday in which authorities said a 15-year-old boy began firing in a residential neighborhood and then on the walking trail, killing five and wounding two others. The recordings also provide new details about the teen, with multiple callers saying he was wearing camouflage and one caller saying he was carrying a shotgun.

In one of the first calls, around 5:12 p.m. Thursday, a man describes seeing the shooter kill off-duty police officer Gabriel Torres in the Hedingham neighborhood northeast of downtown. The caller frantically asks for help.

“He just walked right through and shot him. He walked by and shot him for no reason,” the caller says, adding, in reference to Torres: “It looks like he’s bleeding from his chest.”

The caller says the shooter was wearing camouflage and was moving toward the Neuse River Greenway Trail that runs behind the neighborhood.

In a separate call around the same time, a neighbor reports hearing multiple shots and people screaming, then looking out her window and seeing two gunshot victims.

Minutes later, another caller says the suspect was carrying what appeared to be a shotgun.

“There’s a white kid running out here with a shotgun, he shot somebody. … He ran back into the woods,” the caller said.

A few minutes later, a man tells the dispatcher he was on the trail when he encountered a woman unconscious. Illustrating the confusion over what was happening, the dispatcher tells the man there are reports of an active shooter, and he screams: “What?!”

As he gets closer to the woman and tries to relay details about the location, he interjects: “Oh my god!”

“Sir, what’s going on there?” the dispatcher asks.

“Um, um, um. She’s bleeding,” he says. He then realizes there’s another shooting victim on the trail.

“Oh my god, there’s another person,” the caller says. He can then be heard telling other people at the scene, “Guys, we got to get out of the area. She said there might be an active shooter around here.”

The shooting drew officers from numerous agencies to the neighborhood as the suspect eluded capture for several hours. The victims were different races and ranged in age from 16 to their late 50s and were felled going about their daily routines, police and loved ones said.

Torres, the off-duty police officer, was killed while on his way to work, while one of the women who died was on her porch talking to a neighbor, and another woman who died was out walking her dog. Another was out exercising.

The suspect was hospitalized in critical condition following his arrest, but authorities have not said how he was injured. His identity has not been released, nor has a motive for the attack been disclosed.

Prosecutors will seek to charge the suspect as an adult, Wake County District Attorney Lorrin Freeman said Friday. She declined to say what charges he will face.

What we know about Raleigh NC shooting, suspect, victims