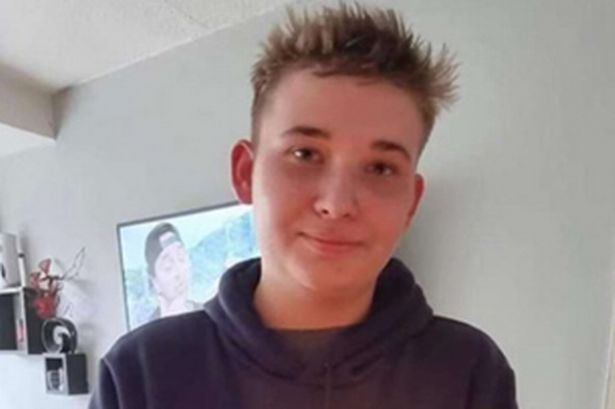 By LAURENCE DOLLIMORE FOR MAILONLINE

A 15-year-old boy who was murdered while trying to protect his mother during a ‘ferocious’ double stabbing has been named as Jakub Szymanski.

Jakub was branded a ‘hero’ who ‘fought for his family’ after stepping in to to save his mother, Katarzyna Bastek, who was left ‘seriously injured’ following the shocking attack in Miles Platting, Manchester, on Thursday evening.

A 44-year-old man was arrested some 250 miles away in Kent on suspicion of murder on Friday night, reported Greater Manchester Police.

A person close to Jakub, who is believed to be one of four brothers, told the MEN: ‘There’s not a chance that boy isn’t a hero. Everyone here knew him for being kind and respectful.

‘He was quiet, but he was a protector. He fought for his family. He was an amazing person, he was a hero and he should be remembered as one.’

Forensic teams were pictured working the scene on Saturday morning while a police cordon remained in place.

A bunch of flowers could also be seen placed outside the home as locals paid tribute to Jakub. 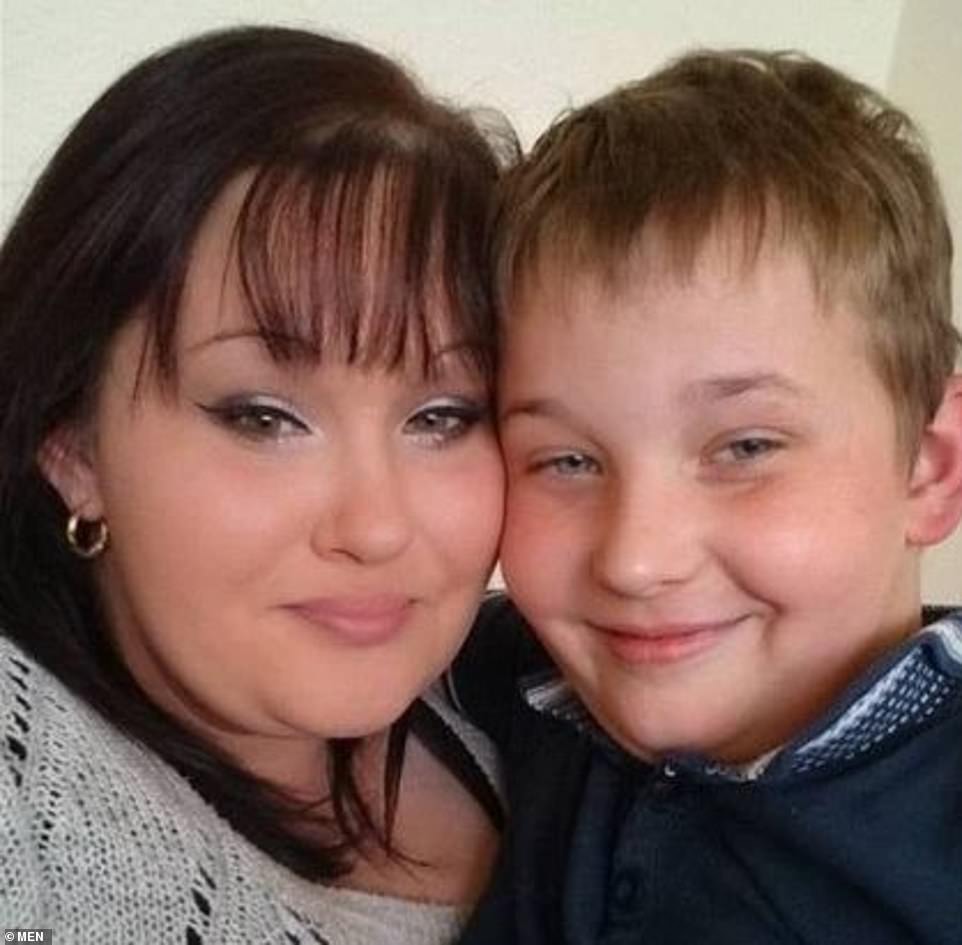 Jakub Szymanski was branded a ‘hero’ who ‘fought for his family’ after stepping in to to save his mother, Katarzyna Bastek (pictured together), who was left injured following the double stabbing in Miles Platting, Manchester, on Thursday evening 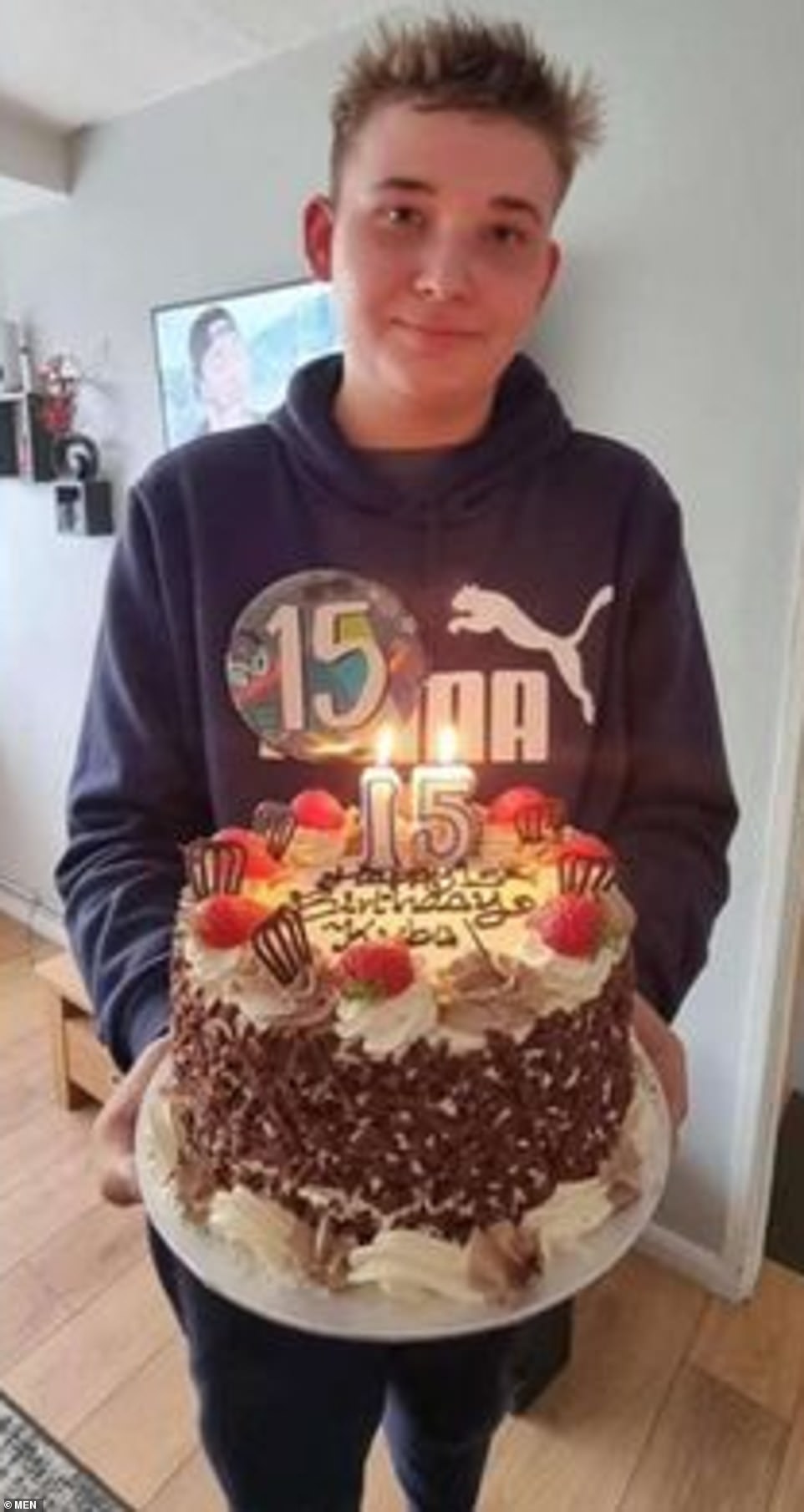 Tragic: Jakub died on Thursday night after being fatally stabbed at his home in Manchester 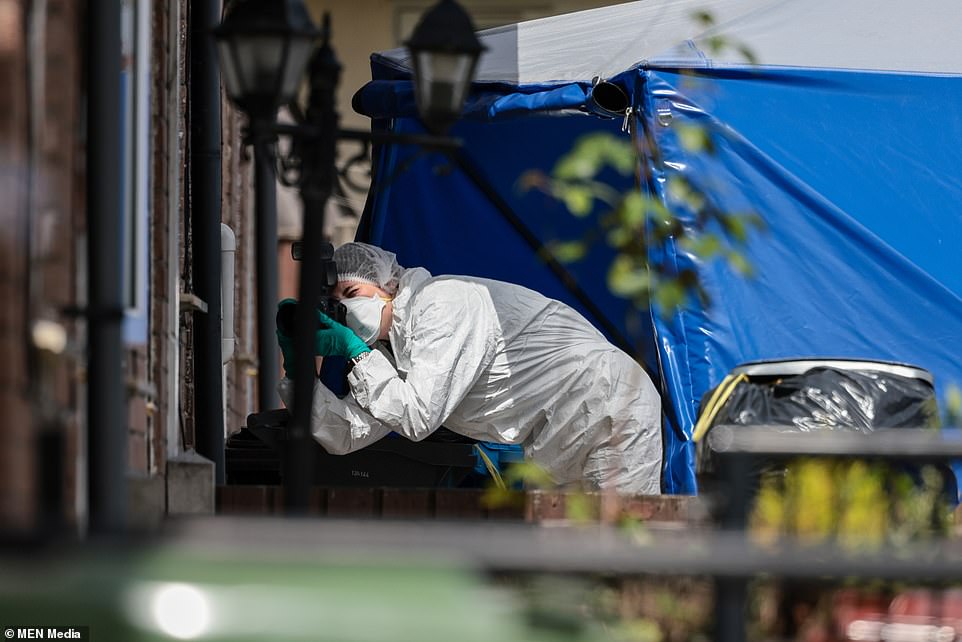 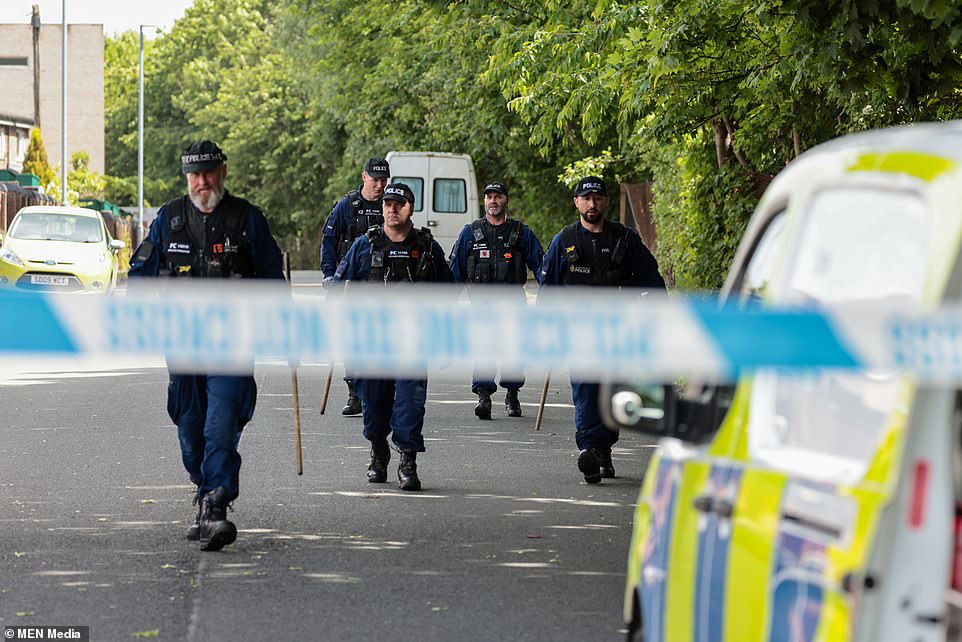 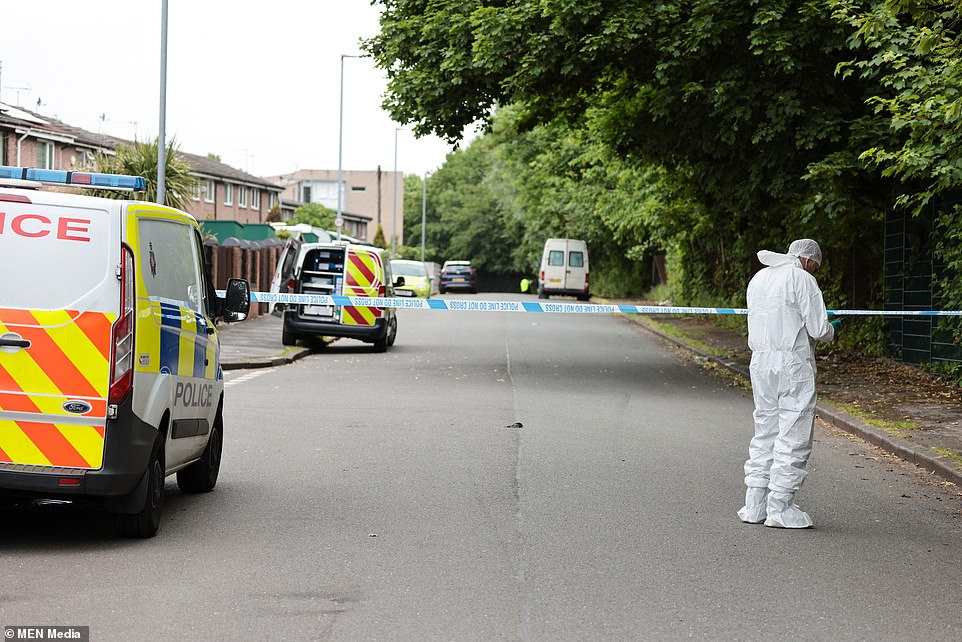 A police presence remained at the scene of Jakub’s murder on Saturday, with a large section of Bednal Avenue remaining cordoned off (Pictured: Forensic investigator working the scene)

Detective Chief Inspector Alicia Smith, from GMP’s Major Incident Team, said on Friday night: ‘Last night’s attack has left a community reeling and a family coming to terms with what was an absolutely devastating incident for everyone involved.

‘A teenage boy who had his whole life ahead of him has tragically lost his life and not only is his mother grieving at the loss of her son, but she is also recovering from what will have been no doubt, hugely traumatic.

‘Our thoughts remain very much with the family and we are absolutely committed to establishing what exactly happened last night.

‘Detectives have been working around the clock since this incident was first reported to us and we’ve now made an arrest which is a huge step forward in getting the family the answers they need.’

Jakub was treated at the scene for stab wounds before being taken to hospital where he died around an hour later, the force said.

Neighbours previously told of their shock following the frenzied double attack at the property. 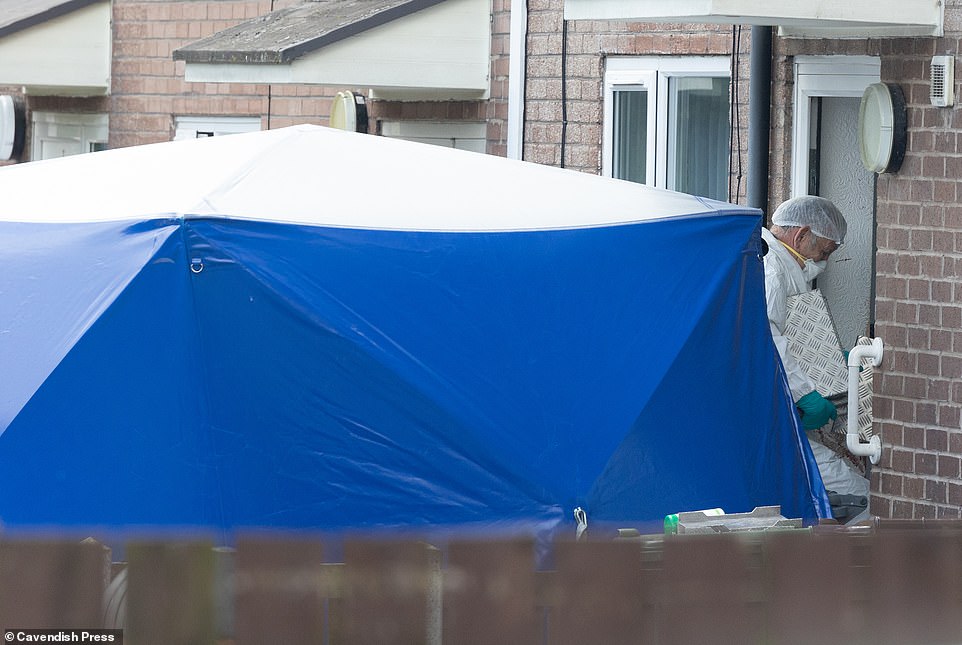 A forensic tent is set up at the scene in the Miles Platting area of Manchester, where 15-year-old Jakub was stabbed to death on Thursday night 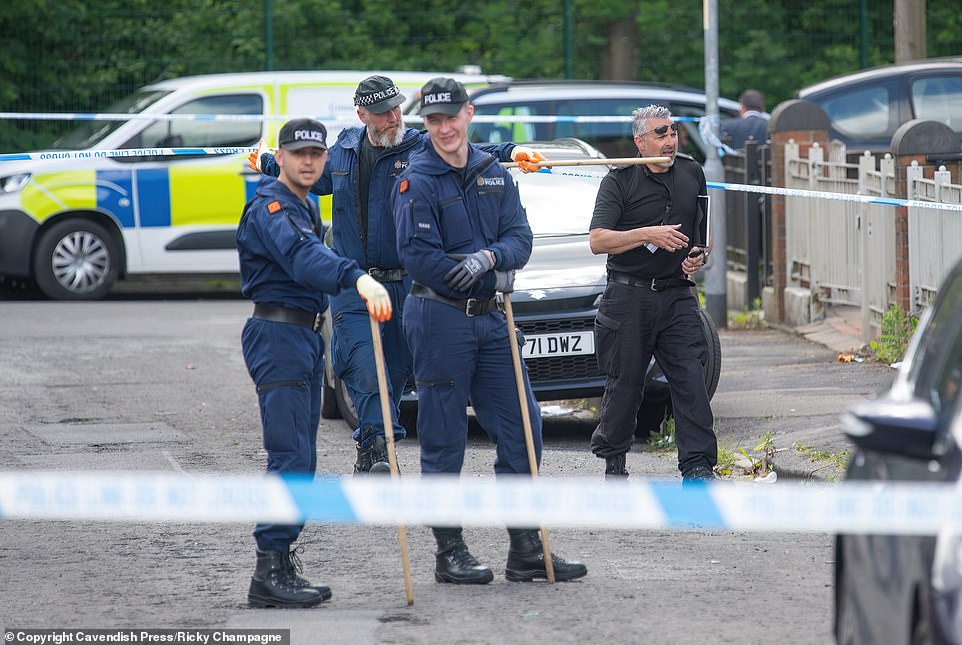 One local in the quiet terraced street of Bednal Avenue in Miles Platting said she looked out of the window to see medics trying to save the boy’s life in the street.

The woman, who wished to remain anonymous, said: ‘Apparently some fella just ran in and stabbed the son and the mother.

‘I saw someone trying to resuscitate the boy. I looked out of bedroom window and saw the ambulance crews.

‘There was loads of screaming, then all the police and ambulances came.

‘I didn’t think anything like that could happen around here. It’s scary. It’s horrendous.

‘It’s just shocking it has happened in this neighbourhood.’

The suspect was last seen walking on nearby Sawley Road shortly after the attack took place.

One resident, who did not want to be named, said: ‘I didn’t know the family personally but I knew of them.

‘It’s terrible. It’s not the kind of thing that happens round here, the area has improved massively with regeneration and this is so sad.

‘It’s a horrible feeling, it’s more than nervous, it is emotional. It is such a sad state of affairs.’ 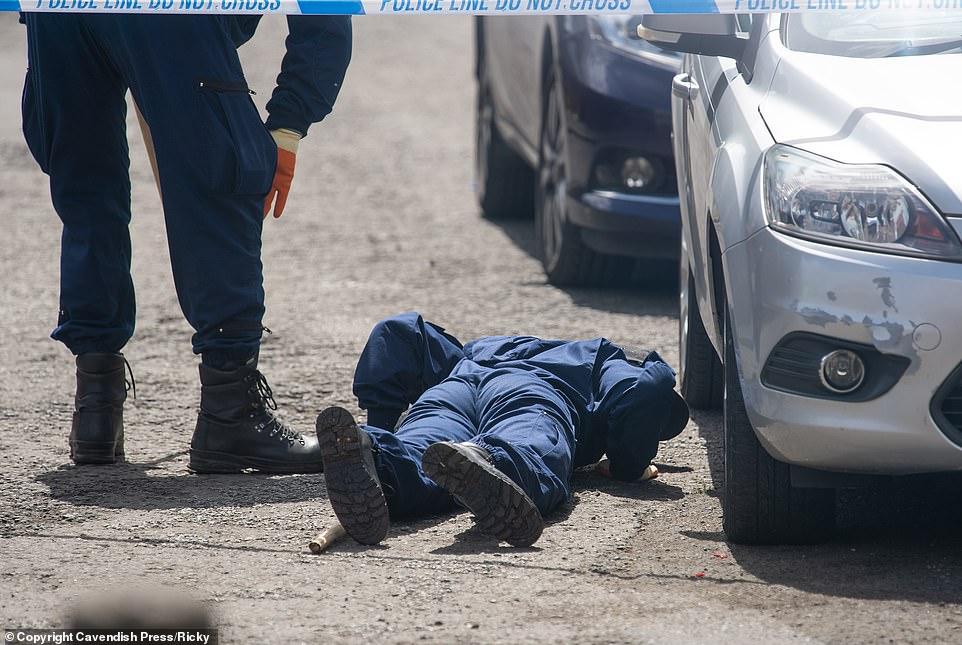 The teenage boy was treated at the scene for stab wounds before being taken to hospital where he died around an hour later, Greater Manchester Police said 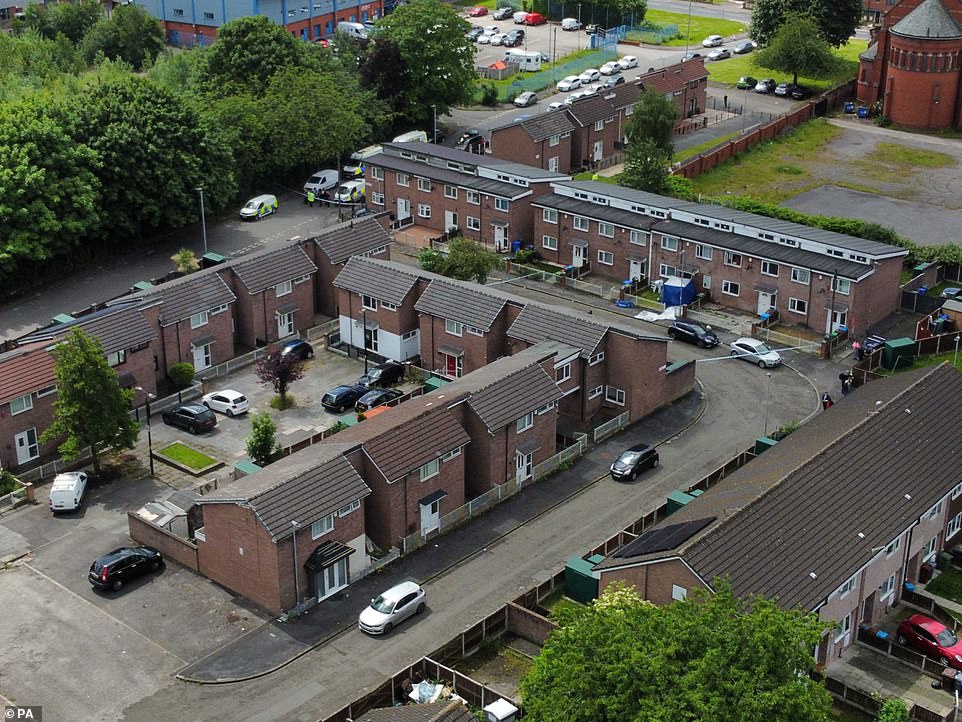 Neighbours told of their shock after a 15-year-old boy was stabbed to death ‘trying to defend his mum’ in a frenzied double attack at a house in Bednal Avenue, Miles Platting, Manchester (pictured in aerial shot)

Detective Chief Inspector Gina Brennand said: ‘Last night’s events are nothing short of devastating as a teenage boy has tragically lost his life and a mother is grieving in hospital after also being seriously attacked.

‘We have trained family liaison officers dedicated to supporting her and her family at this incredibly distressing time, and we are committed to doing all we can to make sure we bring the person responsible to justice.

‘This is a shocking incident for the people of Manchester to wake up to.

‘This is a ferocious attack that has seen a teenage boy fatally injured.’