The world’s richest man has inserted himself in some of the world’s most combustible conflicts.0″ 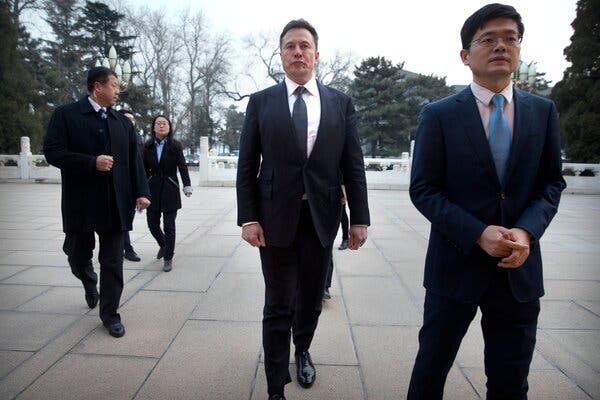 Elon Musk, center, met the Chinese Premier Li Keqiang in Beijing in 2019. Mr. Musk has been criticized for statements regarding China’s interest in Taiwan.Credit…Pool photo by Mark Schiefelbein

In the last four weeks, Elon Musk has offered a peace plan for Russia and Ukraine that outraged Ukrainian officials. He has posted a tweet about Iranian internet access that exposed government protesters to a phishing scheme. He has also suggested in a newspaper interview that China could be appeased if it were given partial control of Taiwan. An official in Taipei demanded that he retract his suggestion.

Mr. Musk has in recent months emerged as a new, chaotic actor on the stage of global politics. While plenty of billionaire executives like to tweet their two cents on world affairs, none can come close to Mr. Musk’s influence and ability to cause trouble. He has sometimes waded into situations even after he was advised not to, and has already left behind plenty of messes.

While the bulk of Mr. Musk’s wealth comes from his stake in his electric car company, Tesla, his influence stems largely from his rocket company, SpaceX, which runs the Starlink satellite network. Starlink can beam internet service to conflict zones and geopolitical hot spots, and it has become an essential tool of the Ukrainian army.

Mr. Musk’s influence will grow with the close of the deal to buy Twitter. He has called himself a free speech absolutist, and he is expected to take a light touch to moderating Twitter’s content.

His critics — and there are many — worry that it is difficult to separate Mr. Musk’s opinions from his business interests, especially when it comes to Tesla, which is increasingly dependent on China.

“Technology has become central to geopolitics,” said Karen Kornbluh, a director with the German Marshall Fund, a geopolitical think tank, and a former adviser to President Barack Obama. “It is fascinating and it is messy and there is Elon Musk in the middle of it.” 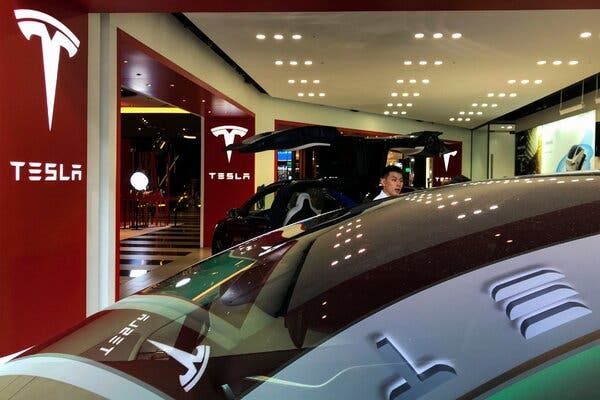 China is a key part of Tesla’s future.Credit…Ritchie B. Tongo/EPA, via Shutterstock

In some cases, Mr. Musk has been a boon. When he provided Starlink internet access in Ukraine earlier in the year and funded at least part of the hardware and service, he equipped both civilians and soldiers with a crucial means of communication during the ongoing conflict with Russia.

But the messages he has delivered have also caused problems. Last week, in a Twitter post, he said he could not “indefinitely” fund Ukraine’s use of Starlink, before suddenly reversing course.

At lunchtime, under a tent on a golf course, Mr. Musk took the stage for a sweeping conversation with the billionaire businessman David Rubenstein, according to two people who attended the event and spoke on the condition of anonymity.

At the end of the conversation, to the surprise of many in attendance, Mr. Musk proposed a peace plan for the war in Ukraine that would allow Russia to annex Ukrainian land, seeming to align himself with the Kremlin.

The idea outraged many at the event, according to attendees. The next day, Jake Sullivan, the national security adviser to President Biden, gave a video talk at the event and a questioner raised the issue of Mr. Musk’s peace plan. Mr. Sullivan did not comment on Mr. Musk’s remarks at the event, according to a National Security Council spokesperson. Nonetheless, Mr. Musk revealed his plan 10 days later on Twitter. The Kremlin publicly supported the idea.

President Volodymyr Zelensky of Ukraine and his top aides fiercely rebuked Mr. Musk’s plan. But his shifting positions put them in a bind: Starlink terminals have become a crucial means of communication for the Ukrainian Army.

Mr. Musk did not respond to several requests for comment.

In mid-September, as the army advanced into southern territories previously occupied by Russia, it lost access to Starlink in some areas near the front lines, four people with knowledge of the matter said. Two of them said this was because Mr. Musk had “geofenced” the service so that it was available only in certain areas. It was not clear why the satellite system was not working, and others in Ukraine reported that it was working fine.

Mr. Musk has discussed the matter with both the Ukrainian government and the U.S. government in an effort to determine the locations where the army will have access to Starlink, according to the people. A National Security Council spokesperson said that the council, the Treasury Department’s Office of Foreign Assets Control and “officials across the U.S. government have spoken to Starlink and answered questions about U.S. policy like we do with all companies.”

This month, Mr. Musk delivered more uncertainty to Ukraine when he said he could not keep paying for Starlink service to the country, making it seem like he was shouldering the expense. In fact, the United States, Britain and Poland have paid SpaceX for at least part of the Starlink cost, according to a document outlining the expenditures reviewed by The New York Times. 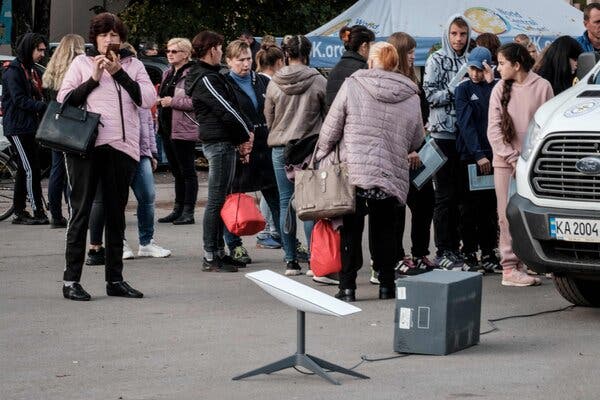 A Starlink system being used in the Kharkiv region of Ukraine.Credit…Yasuyoshi Chiba/Agence France-Presse — Getty Images

“He has to decide whether Starlink is a commercial service that provides sometimes lifesaving technology to its customers or a service that is highly dependent on the geopolitical interests of its management and, thus, unreliable for customers who have concerns over national security,” said Dimitri Alperovitch, co-founder of the Silverado Policy Accelerator, a geopolitical think tank in Washington.

While he was in Aspen laying out his peace plan for the war in Ukraine, Mr. Musk also waded into unrest in Iran.

As protests spread across the country and the authorities responded by blocking internet access in some areas, he appeared to come to the rescue. “Activating Starlink,” he said in a Twitter message after the U.S. government lifted some sanctions that limited the ability of American tech companies to operate in Iran so that they could aid protesters.

Starlink offered the potential to bypass the government’s blockade of land-based internet connections that had taken Iranians in many cities offline.

But as many Iranians soon learned, Mr. Musk’s promise did not hold up. Left unsaid by Mr. Musk was any context on what was needed to get Starlink up and running, how long it would take and why Iranian government restrictions would make it nearly impossible to offer the service widely inside Iran.

While Starlink remained unavailable in Iran, hackers believed to have links to the government began a phishing campaign, sending messages inside social media channels with links claiming to provide access to Starlink, according to Amir Rashidi, a digital rights expert from Iran. Rather than providing access to Mr. Musk’s satellite system, the links were malware that gobbled up information from the users’ phones, said Mr. Rashidi, who analyzed at least five versions of the malware. 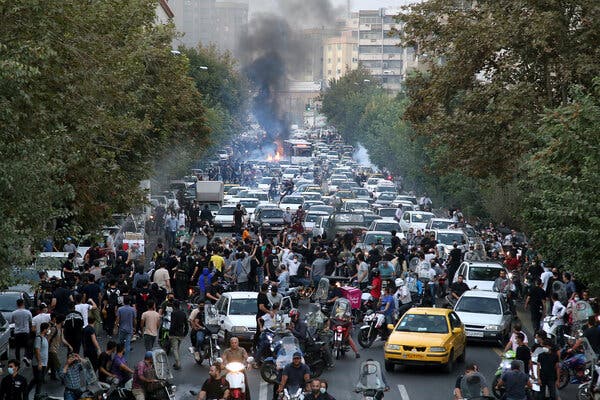 After protests in Iran prompted the government to block internet access in some cities, a tweet by Mr. Musk implied that Starlink service would be available to its citizens.Credit…via Associated Press

A small amount of Starlink internet access is now available in Iran with equipment smuggled across its border, Mr. Rashidi said. That is creating additional concerns that the authorities will be able to identify data transmitted because the satellite signals may be traceable to individuals on the ground.

Mr. Rashidi, who fled the country in 2009, commended Mr. Musk for trying to help but said his tactics were “very irresponsible.”

“It was just someone who wanted to jump up to say, ‘I’m doing something good,’ without understanding what the consequences would be,” he said.

Tensions between China and Taiwan pose major risks to Mr. Musk’s business empire. Tesla operates a manufacturing facility in Shanghai that produces as much as 50 percent of the company’s new cars. The Beijing government tightly controls how Western companies operate in the country, and observers have long worried about how Tesla’s dependence on China could affect Mr. Musk’s political positions.

This month, Mr. Musk confirmed that he faced pressure from Beijing, when he told the Financial Times that the Chinese government had made it clear that it disapproved of his offering Starlink internet service in Ukraine. Beijing sought assurances, he said, that he would not offer the service in China.

Then he offered a way of easing the tensions: handing some control of Taiwan to China.

The comment, which breaks sharply with the policy of the United States and its allies, drew swift rebukes from Taiwanese politicians.

In a phone interview with The New York Times, Chao Tien-Lin, a member of the Democratic Progressive Party and the Taiwanese legislature’s foreign affairs and defense committee, called on Mr. Musk to retract his statement. “If he does not, I will sincerely advise not just Taiwan but all consumers in liberal democratic countries to boycott Tesla and its related products,” he said.

Some have pointed out that if a military conflict breaks out between the two sides, the Taiwanese, like the Ukrainians, may call on Mr. Musk to provide an emergency means of communication with satellite internet. But given Mr. Musk’s public stance on the situation and links to China, Starlink may not be a viable option.