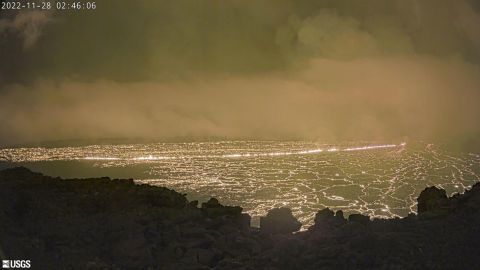 By Monica Garrett and Dakin Andone

Moku’āweoweo Caldera is seen Monday via webcam from the US Geological Survey.

The eruption in Hawaii Volcanoes National Park is not threatening downhill communities or flights to the Island of Hawaii, the Hawaii Tourism Authority tweeted Monday morning, though up to a quarter inch of ashfall could accumulate on parts of the island as winds may carry fine ash and volcanic gas downwind.

“People with respiratory illnesses should remain indoors to avoid inhaling the ash particles and anyone outside should cover their mouth and nose with a mask or cloth,” the National Weather Service in Honolulu warned.

“Possible harm to crops and animals. Minor equipment and infrastructure damage. Reduced visibility. Widespread clean-up may be necessary,” it added.

Lava flows are contained in the summit area and do not threaten downslope communities, the Hawaiian Volcano Observatory said.

“Based on past events, the early stages of a Mauna Loa eruption can be very dynamic and the location and advance of lava flows can change rapidly,” the observatory said, adding, “If the eruption remains in Moku’āweoweo, lava flows will most likely be confined within the caldera walls.

“However, if the eruptive vents migrate outside its walls, lava flows may move rapidly downslope.”

The eruption began in Moku’āweoweo, the summit caldera of Mauna Loa, on Sunday around 11:30 p.m. HST (4:30 a.m. ET Monday), according to the observatory.

Mauna Loa, which covers half the island of Hawaii, has erupted 33 times since 1843, the volcano’s first “well-documented historical eruption,” according to the US Geological Survey. It last erupted in 1984, making this prolonged quiet period the volcano’s longest in recorded history.

The volcano has recently been in a heightened state of unrest, per the agency, which pointed in an update late last month to elevated seismic activity and increased earthquake rates.

The increased activity prompted Hawaii Volcanoes National Park in October to close the Mauna Loa summit to all backcountry hikers until further notice, though the US National Park Service said the main section of the park has remained open.