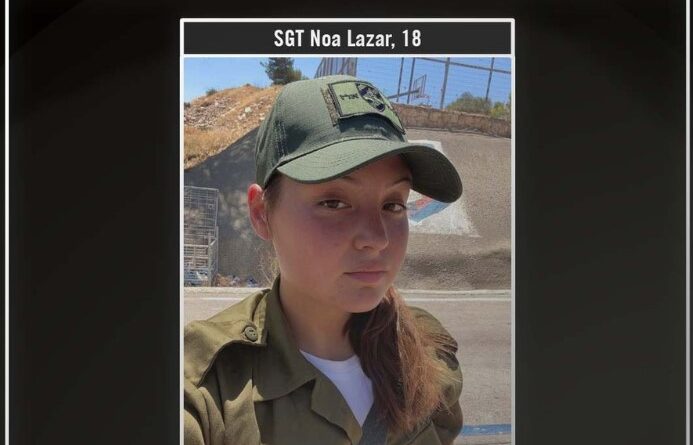 Manhunt ongoing for suspect who fled after shooting attack

Israeli security forces at the scene of a shooting attack at a checkpoint outside the Shuafat refugee camp in Jerusalem, October 8, 2022.

The Israeli military identified Noa Lazar, a female soldier, as the 18-year-old victim.

SGT Noa Lazar was killed in a shooting attack at the Shu’afat checkpoint last night while protecting her country.

SGT Lazar served in the Erez Battalion of the Military Police. After her death, she was promoted from the rank of Corporal to Sergeant.

A footage shared by Israeli media documents last night’s shooting operation in Shuafat neighborhood, occupied Jerusalem, which resulted in the killing of an Israeli soldier and the injury of 2 others, one seriously

The shooter is still on the loose after fleeing into the nearby Shuafat refugee camp.

The driver of the vehicle turned himself into police and told them he picked up the shooter not knowing he was armed or what his plans were, according to reports. The suspect jumped shot several bullets from the car, then fled after his gun jammed.

Police believe the suspect is a 22-year-old Arab man and are looking for others also believed to have been involved.

“Our forces are spread out during the upcoming Sukott holiday and are working day and night to protect the people of Israel. Terror will not prevail,” Prime Minister Yair Lapid said.

“There are no words that can ease this terrible loss. We will not rest until we bring these heinous murderers to justice,” he said.

The shooting occurred at the end of the Sabbath and a day before the holiday of Sukkot is set to begin. Israel has been on high alert because of the Jewish holidays and has ramped up police presence across the country. Tensions were high due to ongoing Israeli operations in the West Bank that have resulted in dozens of Palestinian deaths – including two on Saturday – and hundreds of arrests in an effort to root out potential terrorists.

Hamas did not claim responsibility for the attack but said the shooting came in reposes to “the incursions into al Aqsa and the aggression by the occupation today against Jenin.”

“These operations carry a message that the revolt of our people is in progress and will not subside and that the operations, shootings, and gunfire of our youth in revolt will haunt the occupiers and herds of settlers everywhere in response to their crimes and their incursions into the Al-Aqsa Mosque,” Hamas said.

President Isaac Herzog sent his concordances to Lazar’s family who will bury their daughter on the eve of the holiday.

“Sending condolences to the grieving family of the IDF soldier, Sgt. Noa Lazar, for whom the joy of the holiday turned into terrible grief, and praying for the recovery of the injured from the shooting attack in Jerusalem,” said Herzog.

The security establishment will continue its operation.

Defense Minister Benny Gantz said that “The fight against terrorism will continue in all sectors and with all required intensity.”

“We will catch the abominable terrorist and everyone who helped him,” he added.