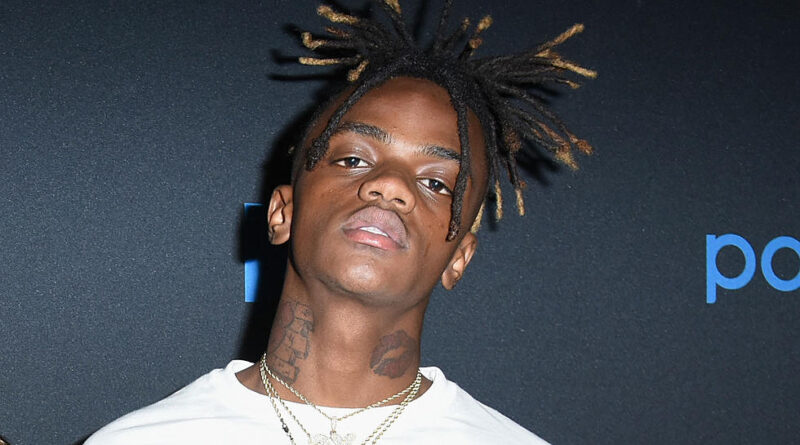 JayDaYoungan has been shot and killed in his Louisiana hometown.

On Wednesday (July 27), reports began to surface online that 24-year-old JayDaYoungan and his father were allegedly shot in their hometown of Bogalusa, La. He was apparently shot outside a home on Superior Avenue. An incident appearing to match the details of the shooting was first officially reported by the Bogalusa Police Department’s Facebook page. They have since confirmed the rapper, born Javorius Scott, has died.

“We can now identify the victims as Javorius Scott, A.K.A. Jay da Youngin, and his father, Kenyatta Scott Sr.,” the police statement reads. “We can also confirm that Javorius Scott has died as a result of his injuries. Kenyatta Scott has been transported to another facility and we have been told he is in stable condition. Detectives are currently conducting interviews and working leads. Further information will follow as it becomes available.”

The BPD initially reported the crime as a double shooting via a press release on Facebook early Wednesday evening.

“On Wednesday, July 27th, 2022 at 5:50 pm the Bogalusa Police Department received a call of a shooting in the 600 block of Superior Avenue,” they revealed in their initial statement. “Officers responded and found that one victim had been transported by POV to Our Lady of the Angels Emergency Room. Another victim, still on scene, was critically wounded and was treated on scene by EMS, then transported to OLA ER. Their condition cannot be released at this time.”

The statement continued, “While working a chaotic scene at the hospital, and working the crime scene on Superior Avenue, another shooting took place in the 800 block of Marshall Richardson Road shortly after 7:00 pm. In that case a vehicle was shot, possibly related to the first shooting. The occupants were not hit. Detectives are also actively working that crime scene. This is a very fluid situation and the information we can release is limited at this time. Our Officers are working diligently to identify the subjects responsible for these crimes. We have several outside agencies assisting at this time.”

When reports of the shooting began to circulate across social media on Wednesday, a woman believed to be JayDaYoungan’s sister hit up Twitter to react to the news. While the woman, who goes by @kenyajanelll on the app, didn’t deny that the shooting happened, she was quick to dispel rumors that the rhymer had died in a series of tweets.

News of JayDaYoungan’s death follows a litany of serious legal issues for him over the past few years. This past June, he was released from prison after serving a seven-month bid. That case stemmed from a Louisiana judge sentencing him to time served on charges of possession of a firearm while under indictment for a felony. He pleaded guilty to violating the Federal Gun Control Act. Prior to his death, he was on house arrest as part of his release conditions. Last October, JayDaYoungan was arrested and slapped with charges including child desertion, illegal use of a controlled dangerous substance in the presence of persons under 17 years of age and possession of a controlled dangerous substance with weapons present.

Just one month before that, the “Opps” spitter was arrested for second-degree murder and obstruction of justice as the result of a homicide that happened in Louisiana one month earlier. The incident left one person dead and two others injured.

JayDaYoungan rose to prominence in the late 2010s, with tracks like “Opps,” “23 Island” and “Elimination.” He’s released 14 projects including the album Baby23 in June of 2020. He released his most recent EP, All Is Well, in March.

XXL has reached out to JayDaYoungan’s team for comment.

Rest in power to these beloved artists.

Birthdate: April 23, 1985
Died: Feb. 25, 2022
Cause of Death: Shot
Snootie Wild, born LePreston Porter, died after reportedly being shot in Houston. According to the Houston Police Department, Snootie was found shot in the neck while next to an SUV in a ditch. A medic arrived on the scene and performed CPR on Snootie before rushing him to a nearby hospital where he was listed in critical condition. The 36-year-old rapper would succumb to his injuries a day later. Snootie’s fiancée, Krystal Meredith, confirmed his death to ABC13 and added that he didn’t have any known enemies so she doesn’t know who shot him.
Snootie, a Memphis native, was signed with Yo Gotti’s CMG label in 2013 and delivered his first big hit “Yayo” in 2014. The gold-selling single appeared on his Go Mode EP and received an all-star remix with French Montana, Jadakiss, Fabolous and YG. Before his death, Snootie was planning a comeback and promoting his single “Respect” from a new album project.

Birthdate: May 14 ,1997
Died: March 18, 2022
Cause of Death: Shot
Goonew was shot and killed in District Heights, Md. The Prince George County Police Department confirmed the killing of the 24-year-old rapper. His murder remains unsolved. A reward of $25,000 was being offered for information in the case.
A native of Washington, D.C., Goonew, born Markelle Morrow, was known for his monotone rhyme flow and was a rising rap star in the DMV music scene. Prior to his death, the up-and-coming artist delivered projects like Certified Goon (2017), Big 64 (2018), Goonwick (2018), Back From Hell (2019) and Short Temper (2021).
After Goonew’s death, his mother and sister received backlash for allowing the later rapper’s dead body to be on display at his homegoing event at Bliss Nightclub in Washington, D.C. Videos from the event began circulating on social media. The clip shows the “Life Story” rhymer’s corpse standing upright onstage rocking jeans, a hoodie, sneakers and a crown on his head. “My brother was a king and that’s how exactly how he wanted to go out,” said Ariana Morrow, Goonew’s sister.

Birthdate: Aug. 14, 1966
Died: April 17, 2022
Cause of Death: COVID-19
DJ Kay Slay passed away after a four-month battle with COVID-19. New York radio station Hot 97, where the influential DJ worked for 20 years, confirmed the sad news. He was 55 years old.
DJ Kay Slay, whose real name is Keith Grayson, was a true renaissance man of hip-hop music and culture. In the 1980s, Slay was an acclaimed graffiti artist known as Dezzy Dez and appeared in the classic hip-hop documentary Style Wars. After a prison stint in the late 1980s, Slay was released in 1990 and embarked on a career as a DJ.
He created his signature The Streetsweeper album series in 2003, the same year he would launch his indie record label, Streetsweepers, which would help boost the careers of lyricists like Papoose, Saigon and others. During his illustrious career, Slay, a.k.a The Drama King, would release nearly 30 mixtapes. His last studio project, The Soul Controller, dropped in December of 2021. The late New York DJ will also be remembered for his big posse cuts, including his last one, “Rolling 110 Deep,” where he recruited a total of 110 rappers to spit bars on a 40-minute track.

Birthdate: March 16, 1998
Died: May 13, 2022
Cause of Death: Unknown
Lil Keed, an artist on Young Thug’s Young Stoner Life label, died at the age of 24. A rep for Lil Keed confirmed to XXL that the Atlanta rapper had passed away. The cause of death remains unknown. News of Keed’s death was also confirmed by his brother, Lil Gotit, on his Instagram account. “Can’t believe I seened u die today bro I did all my cries I know what u want me to do and that’s go hard for Mama Daddy Our Brothers Naychur and Whiteboy #ImaHoldthisShitDown,” Gotit wrote in an IG post of a photo featuring himself and Keed.
Lil Keed, born Raqhid Jevon Render, was raised in the same Atlanta neighborhood as Young Thug, who eventually signed him to his YSL imprint under 300 Entertainment. Keed, an alumnus of the 2020 XXL Freshman class, launched his rap career in 2016, and captured fans’ attention with his Auto-Tuned falsetto and distinct flows in his songs.
Keed garnered his first hit, “Nameless,” in 2018, from his Keed Talk to ’Em mixtape, followed by “Snake,” on his 2019 Long Live Mexico project. The Trapped on Cleveland mixtape series is also a standout in the late rapper’s catalog. Keed was also featured on Thug’s star-studded Slime Language 2 album, which debuted at No. 1 on the Billboard 200 in April of 2021.

Birthdate: Nov. 4, 1987
Died: June 5, 2022
Cause of Death: Shot
Trouble was shot and killed in Conyers, Ga. According to the Rockdale County Sheriff’s Office, the 34-year-old rapper was killed after suffering a single gunshot wound to the chest during a reported home invasion while visiting a female friend.
Police say they have identified 33-year-old Jamichael Jones as the primary suspect in the shooting. Jones turned himself in on June 7 after evading police for two days. The Rockdale County Sheriff’s Office had obtained warrants for his arrest, which include charges of home invasion, felony murder and aggravated assault.
Born Mariel Semonte Orr, Trouble, who also went by the nickname Skoob, was a native of the Edgewood neighborhood in East Atlanta. After signing with Duct Tape Entertainment in 2011, Trouble began making a splash in Atlanta’s hip-hop scene with the song “Bussin (Remix)” featuring Waka Flocka, Trae Tha Truth and Yo Gotti. The ATL-rhymer then signed with Mike WiLL Made-It’s Ear Drummer Records in 2017. Trouble put out his debut album, Edgewood, the following year. His final album, Thug Luv, was released in 2020, and features guest appearances from artists like City Girls, Jeezy, Quavo and Boosie BadAzz.
Having been a beloved member of the community in his home city, news of Trouble’s death devastated the Atlanta hip-hop scene. In a statement regarding the “Bring It Back” rapper’s untimely passing, Def Jam, the parent company of Ear Drummer Records, reflected on the impact Trouble had on his community.
“Our thoughts and prayers are with the children, loved ones, and fans of Trouble,” reads the statement issued by Def Jam. “A true voice for his city and an inspiration to the community he proudly represented. RIP Scoob.”