A flooding survivor was forced to climb to the top of a hill and scream for help when the rising water engulfed her home.

Brianna Imhoff, her husband, and their dogs were rescued from the torrential downpour in Kentucky when an elderly neighbor shot a gun to alert emergency crews. 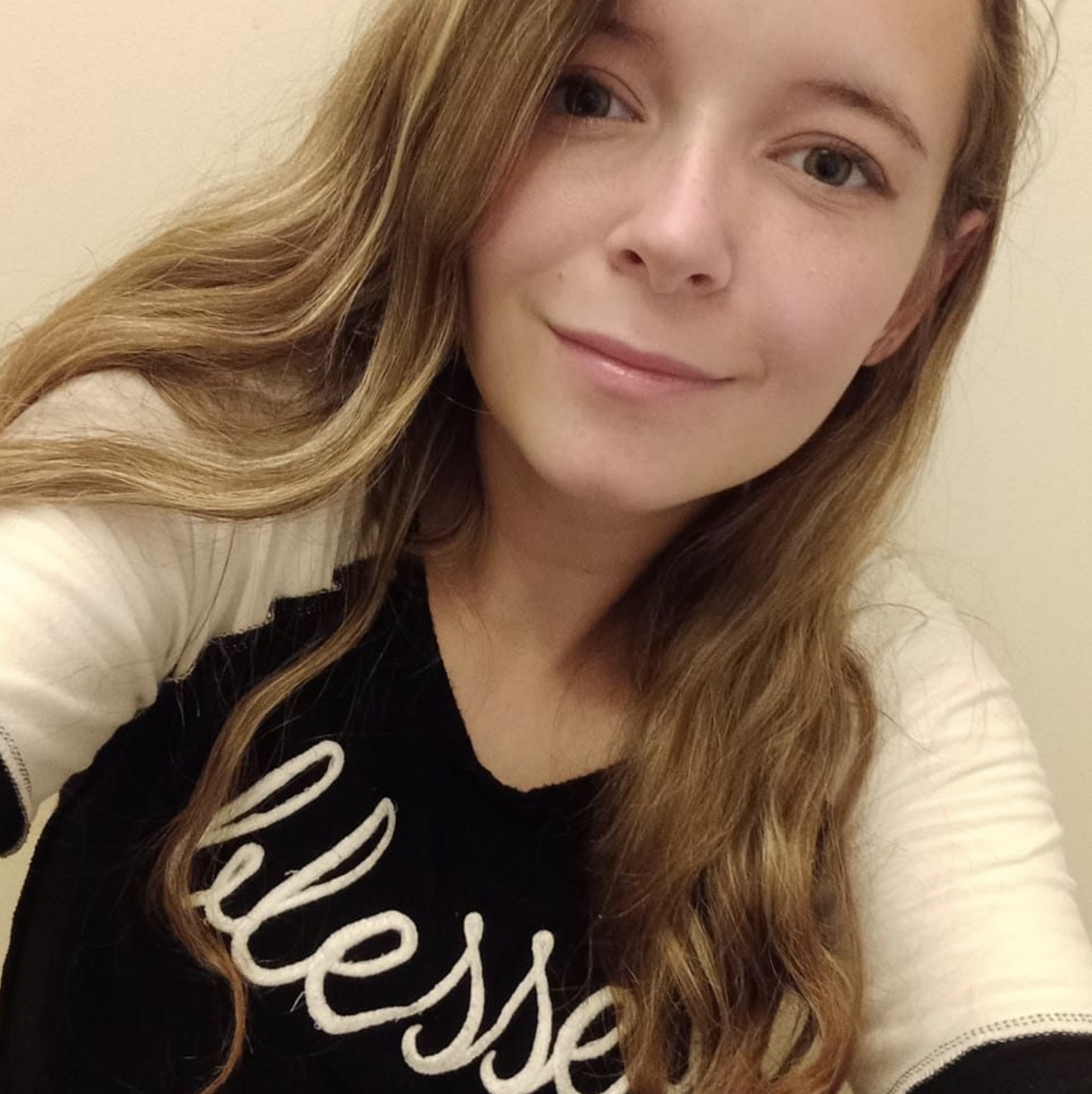 Brianna Imhoff recalled the terrifying floods that engulfed her home 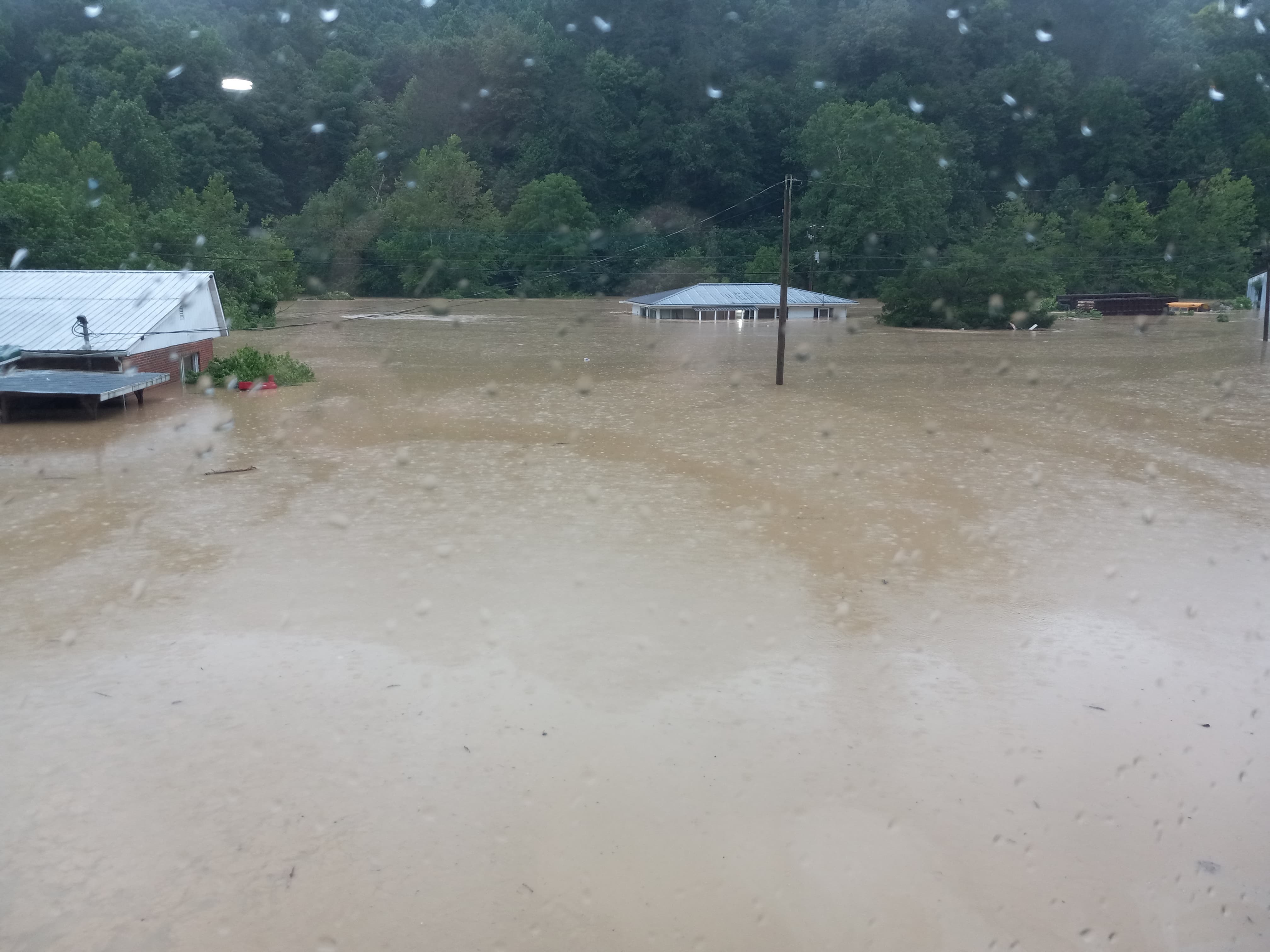 Her house, pictured, was soon submerged in the rising waterCredit: Brianna Imhoff 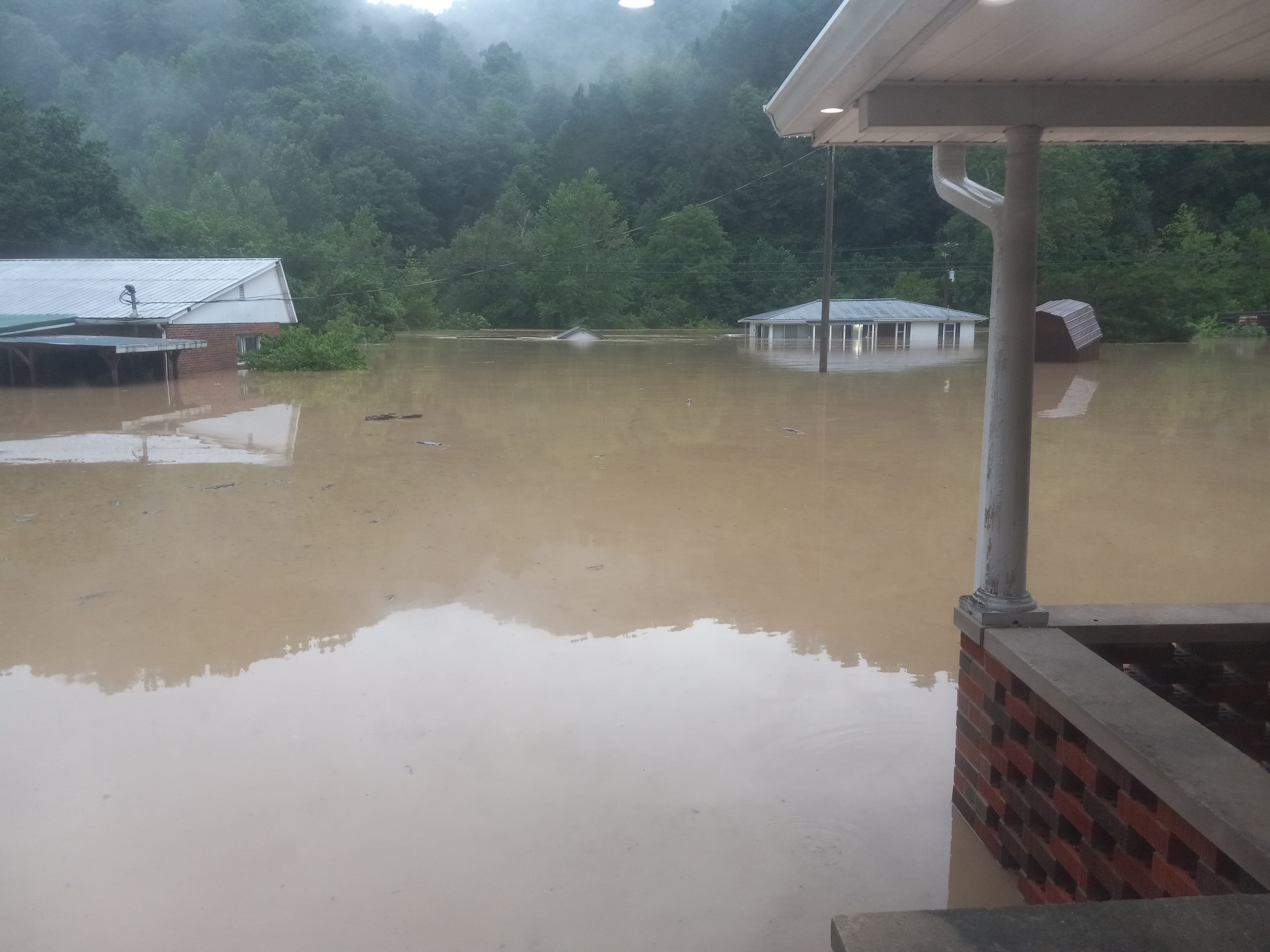 Imhoff said she didn’t think the water would ever stop risingCredit: Brianna Imhoff 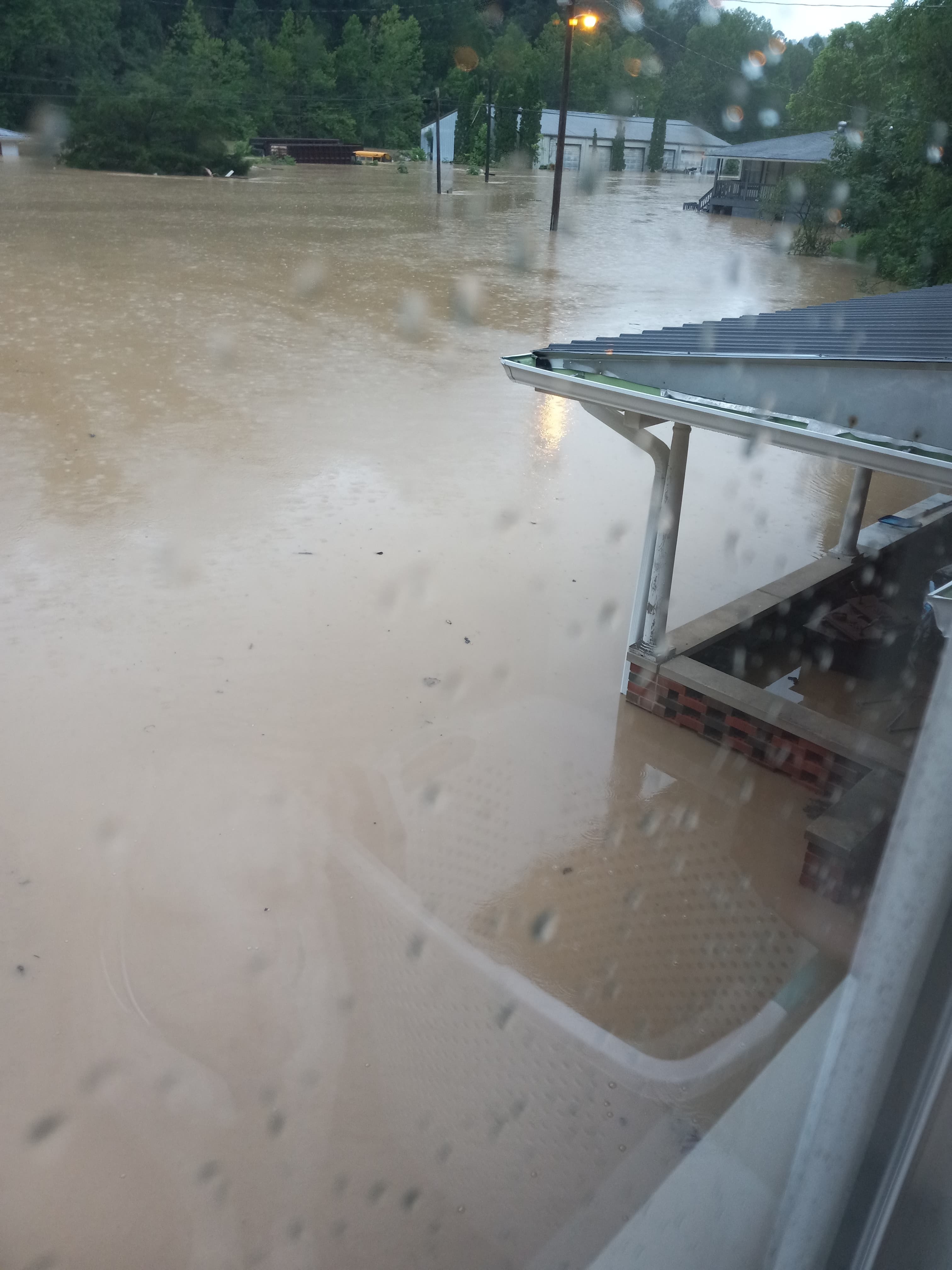 They went to a neighbors house before escaping to a HillCredit: Brianna Imhoff

“I’m just really thankful to be alive,” she told The Sun. “It is really hard to start over but I am glad we still own our lives.”

Imhoff said she woke up around 5am to the sound of water pounding on her home.

When she looked outside, the yard was “completely submerged” in the rapidly rising water.

Imhoff and her husband, Austin, then waded to their neighbor’s house with their two dogs in tow.

“You could not see anything but the roof,” Imhoff recalled.

Imhoff and her husband had only lived in their rental house for a month but the couple worked at a local nursing home and had gotten to know their neighbor by caring for his grandma.

Although he was not home at the time, his aunt let them in.

Imhoff said they were eventually forced to move upstairs when the water began to rise.

By 7am, they felt like they had to get out, so they walked up a hill behind the house.

“If we would have stayed in the house, we would not have been able to get help, because we had no service,” Imhoff told The Sun.

“We just grabbed a few bottles of water and then a little  half a bag of chips, whatever Austin could see in the kitchen of their house.”

“The dogs were kind of scared so they were acting like nutty so we had to walk, hold on to them so they didn’t get in the water, and walk up the hill.”

“ I was just so scared,” she added. “I don’t like the water anyway and I felt trapped.”

I don’t like the water anyway and I felt trapped.

“I didn’t know if people were gonna come that soon,” Imhoff went on. “I expected it to be the next day. I thought we were gonna have to walk higher in  the hills.

“ I just did not think the water was going to stop rising.

“I was literally just praying that somebody would come out and find us.”

Imhoff tried to post where they were on Facebook – but the service would not allow for it.

It wasn’t until 10:30am that they heard a rescue helicopter.

“My husband went down there to the end of the hill and took his shirt off and started waving around and we all started screaming and the woman we were with had a gun so she’s l shot the gun up in the air, and they saw us.”

They were rescued by the local fire department, as well as what Imhoff believes was the state rescue team.

They were taken to the busier town of Jackson and got a ride with a volunteer to check on Imhoff’s mother, whose trailer was also flooded.

Imhoff and her husband are staying at a local pastor’s house while they figure out where to go after losing everything in the torrential flood.

The couple was both set to start a nursing program, which they may have to drop out off because they are not sure where they can stay.

“My mom’s trailer is not looking good. “ Imhoff said. “I’m sure hers is gonna get flooded. I think Austin’s Mom’s [home] got flooded, so it’s just everybody.”

Imhoff’s terrifying experience comes as towns were completely submerged in water with families waiting to be rescued on their roofs.

The National Guard is called in after what is being described as one of the worst floods in the history of Kentucky.

More than six inches of rain hit the area last night, with hundreds of homes and businesses destroyed.

“For so many of our residents, we are currently experiencing one of the worst most devastating flooding events in Kentucky’s history,” Gov. Andy Beshear, a Democrat, said this morning.

“What we’re going to see coming out of this is massive property damage, we expect the loss of life, hundreds will lose their homes, and this is going to be yet another event that it’s going to take not months but likely years for many families to rebuild and recover from.” 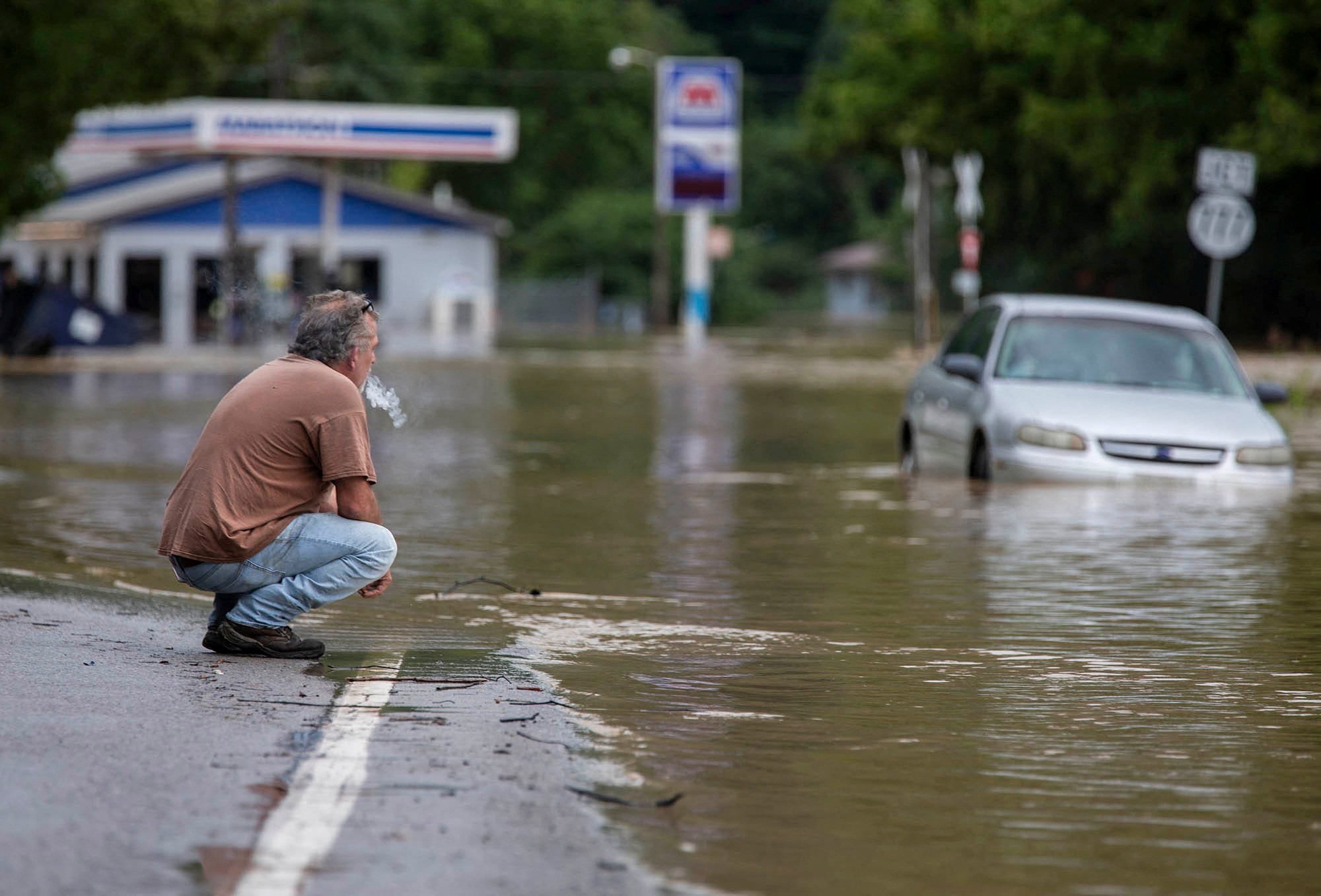 Van Jackson checks on his dog, Jack, who was stranded at a church by flood waters along Right Beaver Creek, following a day of heavy rainCredit: Reuters 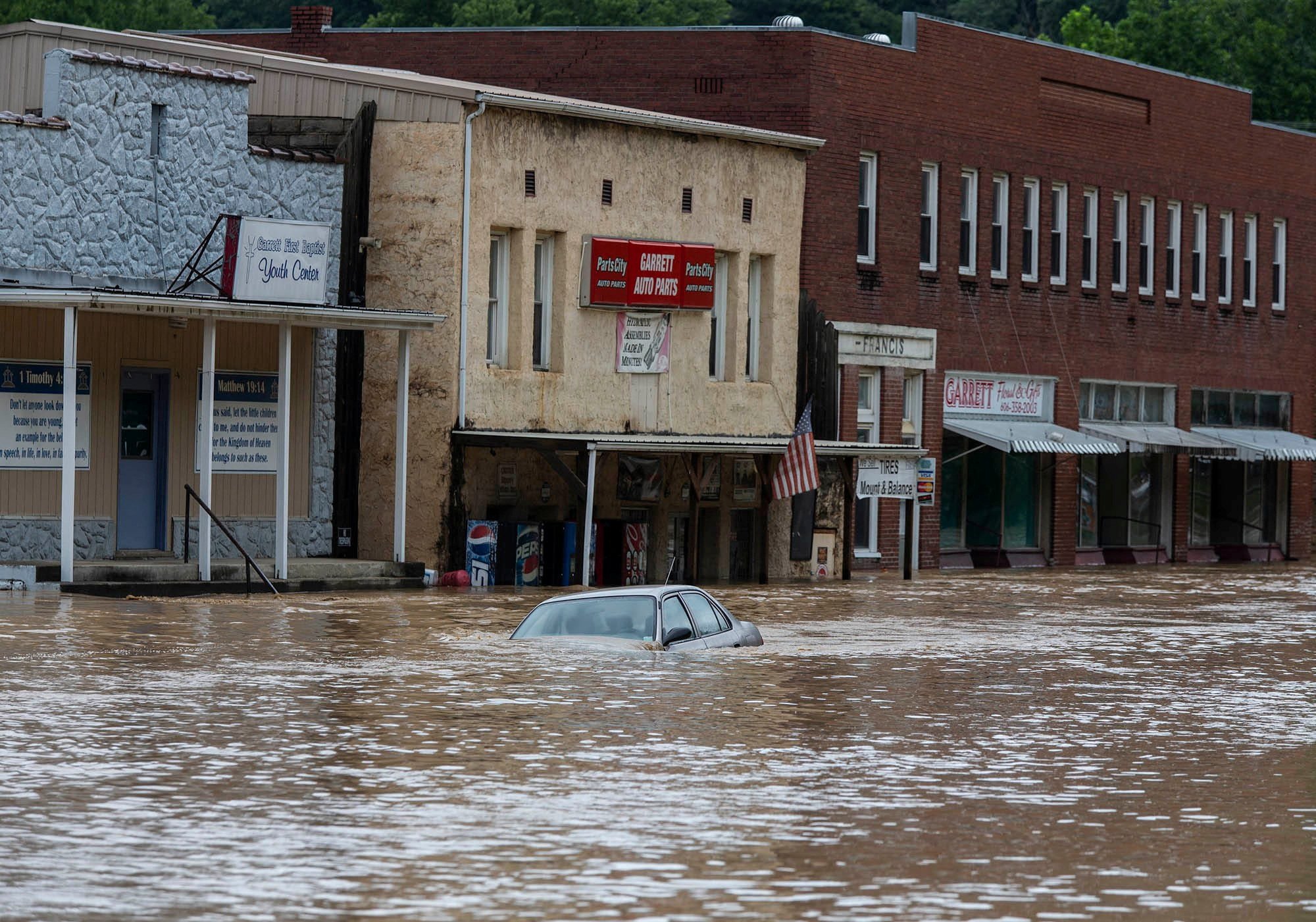 A car is submerged in flood waters along Right Beaver CreekCredit: Reuters 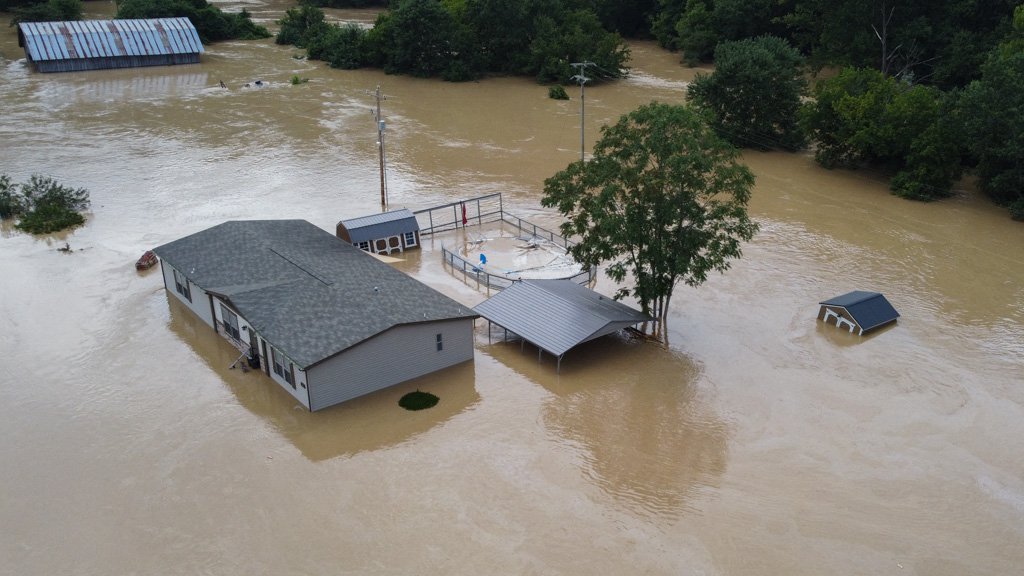 Homes submerged under flood waters from the North Fork of the Kentucky River are seen from a drone in JacksonCredit: AFP or licensors 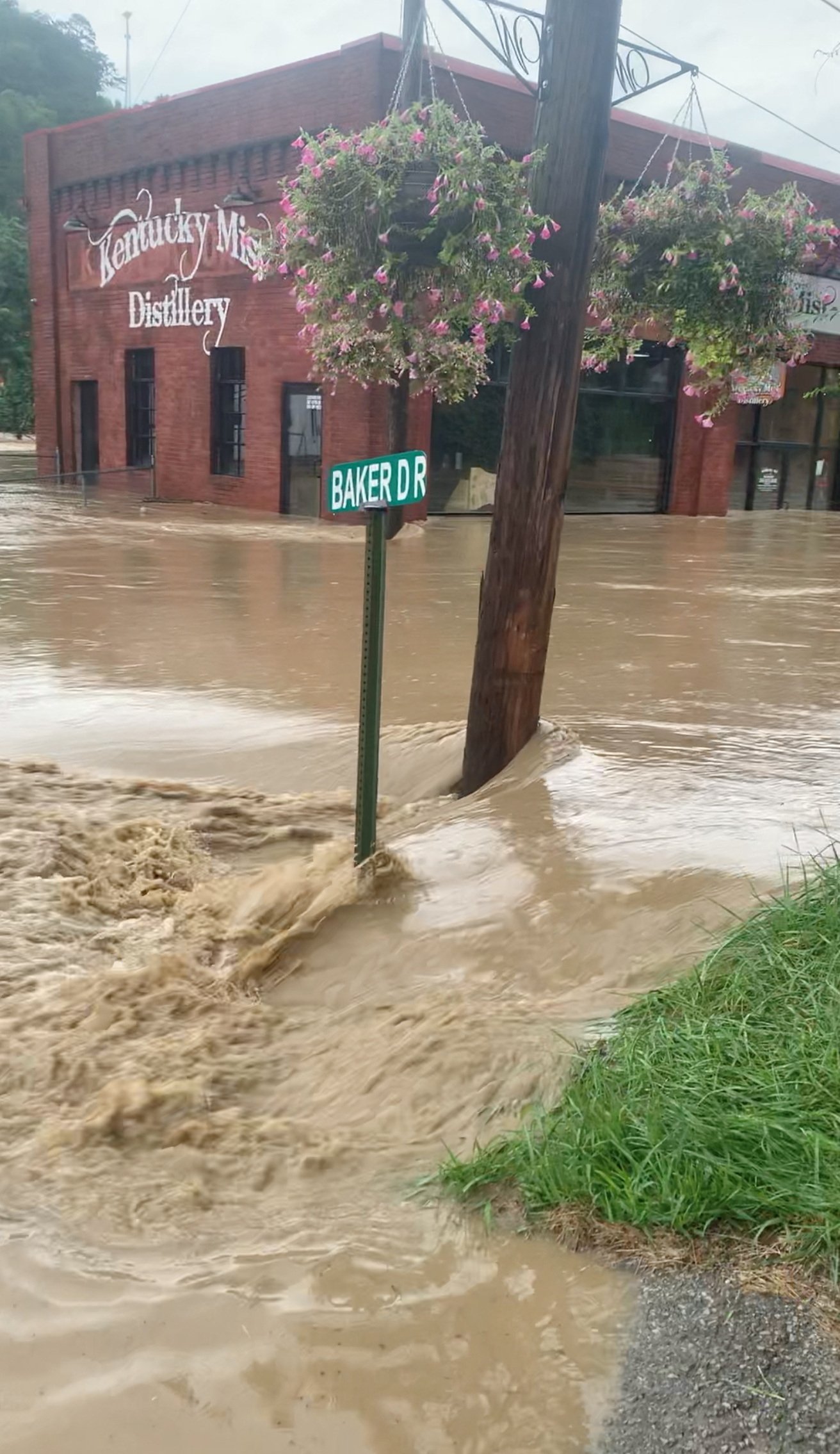 A view of a flooded street in front of the Kentucky Mist DistilleryCredit: Reuters