The suspect was shot by police near the Langley Bypass and 200th Street.

Police have identified the lone gunman in Monday’s shooting spree in Langley as Jordan Daniel Goggin.

Glacier Media has confirmed with the Integrated Homicide Investigation Team (IHIT) that he was born in 1994. 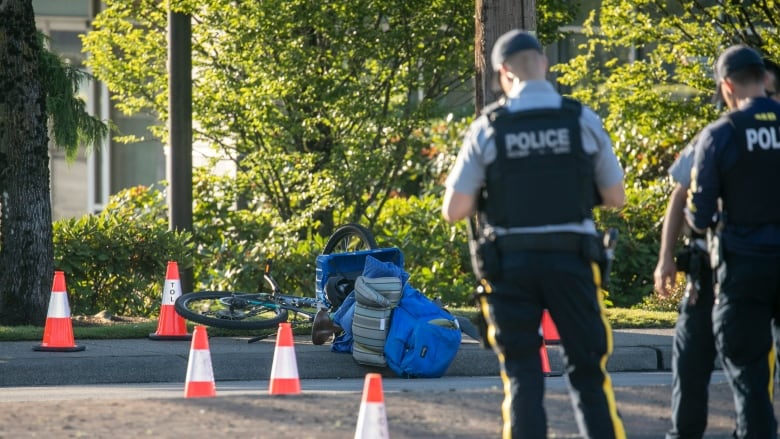 A bicycle at the scene of a shooting at Willowbrook Mall, on 200 Street near the Langley Bypass, on Monday morning. Several people, at least one of whom was homeless, were shot, police said. (Ben Nelms/CBC)

The shooting started at midnight and ended at about 5:45 a.m., say investigators.

Police say five people were shot — including the shooter — resulting in three deaths and two injuries.

A woman is in critical condition after she was shot near 203A Street and Fraser Highway. A man was found dead at Creekstone Place, while another man was killed at the Langley bus loop near Logan and Glover Road.

Goggin was located near the Langley Bypass and 200th Street where another male victim was discovered with a gunshot injury to his leg.

It was there that Goggin was shot by police and died at the scene.

Residents in the area received an alert following the last shooting, around 6:15 a.m., warning them to stay away from the area. The alert advised the public to be on the lookout for a male who was believed to be associated with the shootings and was possibly driving a white car.

“It was based on the information we had at the time and the risk assessment that was done,” said Sgt. David Lee of IHIT, noting the only other time police have sent out a similar alert was for an active shooter in Vanderhoof last November.

A second alert at 7:20 a.m. updated the public that the suspect was no longer a threat. 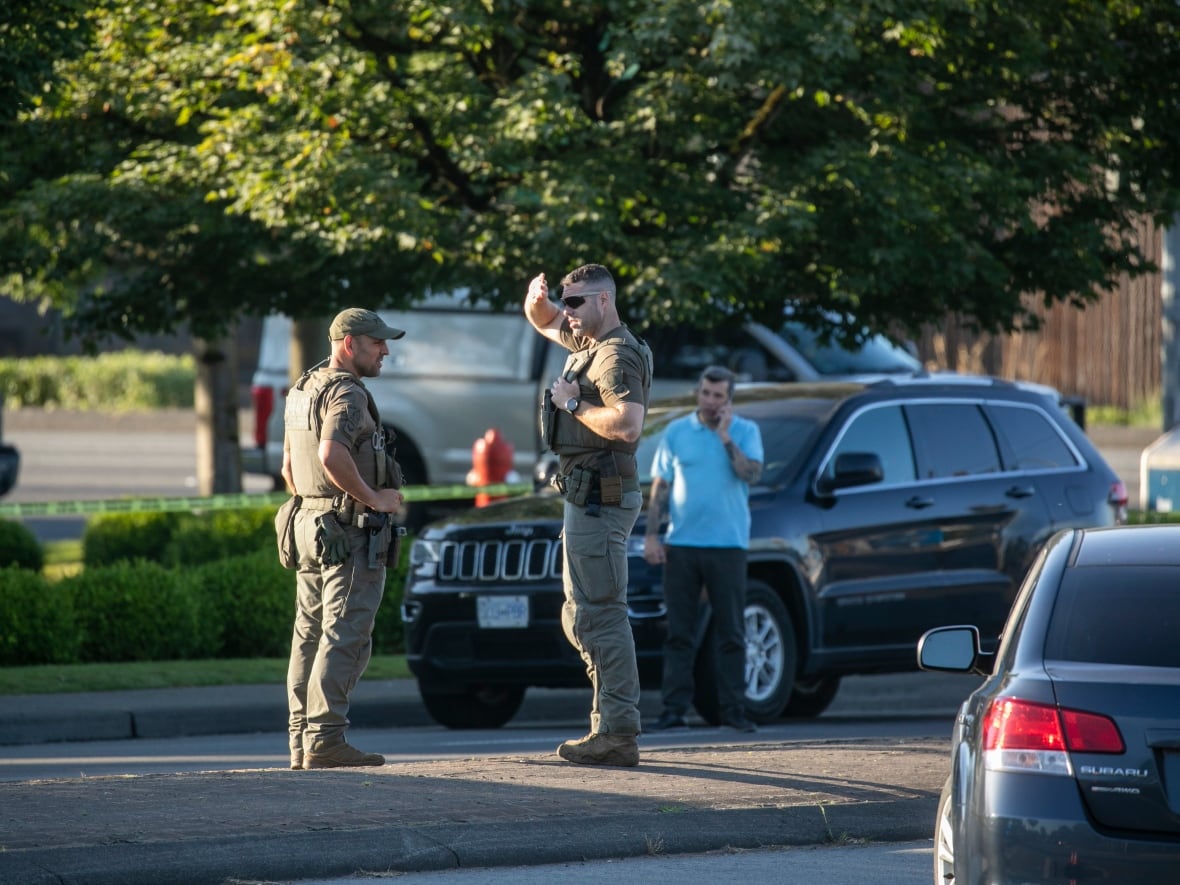 Langley RCMP and emergency response are seen outside Willowbrook Mall in Langley on Monday. The mall was one of at least three crime scenes established by police. (Ben Nelms/CBC)

Earlier Monday morning, Langley RCMP Drug Section Sgt. Rebecca Parslow told Vancouver Is Awesome that an emergency alert was issued “out of an abundance of cause” until investigators could confirm that the suspect was acting alone.

“This senseless act of violence is extremely disturbing and completely unacceptable,” said Mike Farnworth, B.C.’s Minister of Public Safety and Solicitor General, during a media availability Monday afternoon. “My thoughts are with the victims, their loved ones and the communities impacted by this despicable act.”

Farnworth said officials will be reviewing the alert system to see “how things were done and the way they were done.”

“The bottom line is this: they made decisions based on the information that they had, on the critical ensuring of public safety. The area where the shootings took place is a very high-traffic area, very densely populated. Communities use it going all the way from Chilliwack, Abbotsford, coming through the [Fraser] Valley, and likewise, coming from Richmond, Vancouver, going out that way. So there would be a wide-ranging alert in place,” he explained.

The City of Langley’s mayor also addressed the media.

“It’s with a very heavy heart I am here,” said Val van den Broek, tearfully. “We had a tragedy.”

Police haven’t released any information about the two men who were killed. They’re part of the unhoused community, advocates say.

“Right now, I am angry, I am frustrated,” she said.

Rachael Allen, spokesperson for the Union Gospel Mission, condemned the acts of violence. She said all people, including those experiencing homelessness, deserve to be safe and have dignity.

“It’s devastating… and shocking. People in that community, we see them being picked on,” she told reporters. “The people we walk alongside are some of the kindest, warmest and funniest people that I’ve ever met. Yet, often, whether it’s in Langley or in the Downtown Eastside or across Metro Vancouver, they’re met with judgment, stigma, hatred, and now, extreme violence.”

The motive behind the shooting is still unknown.

Police say Goggin was known to them.

B.C.’s police watchdog, the Independent Investigations Office, is investigating the case, as is IHIT.

Multiple areas are closed to the public as police continue their investigation.

About to get underway here in Langley for a press conference with police for an update on the multi-fatal shooting this morning. @VIAwesome pic.twitter.com/8qdlJE8RPj

Behind this tape is an unmarked black police SUV was riddled with bullet holes, one in the driver side of the windshield.

A massive section is taped off with yellow police tape.

I know we are all feeling shocked and saddened after this morning’s shooting incident in Langley. I cannot express enough how grateful I am for the first responders and RCMP who are on scene. My heart goes out the victims and families. https://t.co/Ogbl2xZEUR

The public is being asked to avoid the following areas:

Anyone with information is asked to contact the IHIT information line at 1-877-551-4448 or by email (atihitinfo@rcmp-grc.gc.ca).