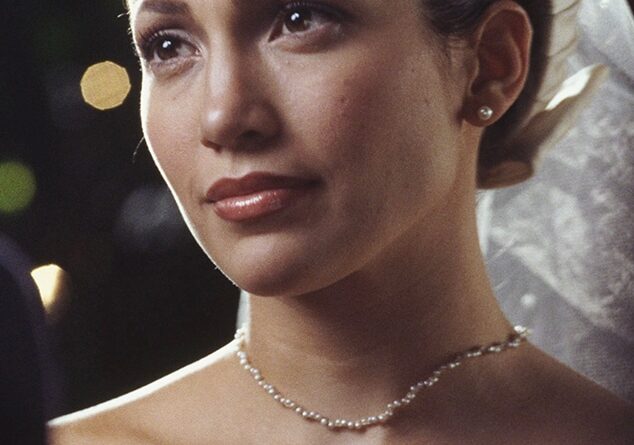 To celebrate Jennifer Lopez and Ben Affleck’s nuptials, here are all of the wedding dresses worn by the Marry Me star through the years, including the one that weighed 95 pounds.

Jennifer Lopez’s love might not cost a thing but these wedding dresses definitely did.

The superstar delivered not one, but two instantly iconic fashion moments when she donned dual designer gowns—one of which she revealed she’d been saving to wear for “so many years”—to marry Ben Affleck in a surprise Las Vegas ceremony on July 16.

And we bet Lopez provided yet another memorable bridal look to add to our vision boards when she and Affleck retied the knot during a three-day celebration with family and friends at the Argo star’s Georgia estate.

So, with our nostalgia meter already on high, we decided this was the perfect time to look back on all of the wedding dresses Lopez has worn through the years—onscreen and off.

For her February 1997 wedding to the Cuban waiter, Lopez donned a lace column dress and adorned her hair with white flowers.

The Selena star sported a stunning beaded Valentino gown for her September 2001 nuptials with Judd, a back-up dancer who appeared in the music video for her hit song “Love Don’t Cost a Thing.”

No official photos were released from Anthony and Lopez’s June 2004 ceremony, which was held in the backyard of her Beverly Hills home barely six months after she and Ben Affleck ended their first engagement. But we know the bride wore a Vera Wang gown and Neil Lane jewels for the intimate event.

For her Las Vegas wedding to Affleck on July 16—which happened almost twenty years after they first got engaged—Lopez began the celebration in a sleeveless white dress with a classic boatneck neckline, revealing that her first look was a “dress from an old movie.”

For her second look, the “Waiting For Tonight” singer changed into a white lace off-the-shoulder gown from Zuhair Murad’s Spring Summer 2023 Bridal Collection.

“We did it,” Lopez gushed. “Love is beautiful. Love is kind. And it turns out love is patient. Twenty years patient. Exactly what we wanted. Last night we flew to Vegas, stood in line for a license with four other couples, all making the same journey to the wedding capital of the world.”

Lopez briefly wore a simple off-the-shoulder dress for the wedding she couldn’t go through with because she was really in love with a doctor who was convinced brown M&Ms were healthy because chocolate is already that color.

But the chic look made a surprising comeback in 2018 when the Internet was convinced the custom-made Givenchy frock Meghan Markle wore at her royal wedding to Prince Harry was inspired by Lopez’s dress in the 2001 rom-com.

“I got a lot of texts about Meghan Markle’s wedding dress,” the movie’s costume designer Pam Chilton told Glamour in 2019. “I’m like, ‘Well, I’m sure it’s a coincidence.’ But she was at a good rom-com age when the movie came out—she could have been watching it at sleepovers!”

Before she goes on the run to flee her abusive husband, Lopez’s character is seen gets marrying him at the beginning of this 2002 thriller.

Yes, Lopez wore a lot of wedding gowns on the big screen in the early aughts. In the 2005 rom-com-gone-wrong, she almost doesn’t make it down the aisle in her SaeYoung Vu Couture corseted gown due to her epic clash with her future MIL, played by Jane Fonda.

While fans never got a full glimpse of the dress Lopez wore to her real-life wedding to Anthony, the couple did get married on-screen in the 2006 drama when they played salsa legend Héctor Lavoe and his wife Nilda “Puchi” Lavoe.

Zuhair Murad designed the showstopping rose gold metallic gown Lopez rocked in the 2022 rom-com. Consisting of nine layers of silk taffeta, horsehair and tulle, the dress was “extremely heavy,” costume designer Caroline Duncan told Variety. “The dress weighed 95 pounds and required five people to transport it and an entourage to get Jennifer in and out of it, but it gave the dress that volume.”