A man killed his wife and then himself at a Kingdom Hall of Jehovah’s Witnesses in suburban Denver, Thornton police said Sunday. 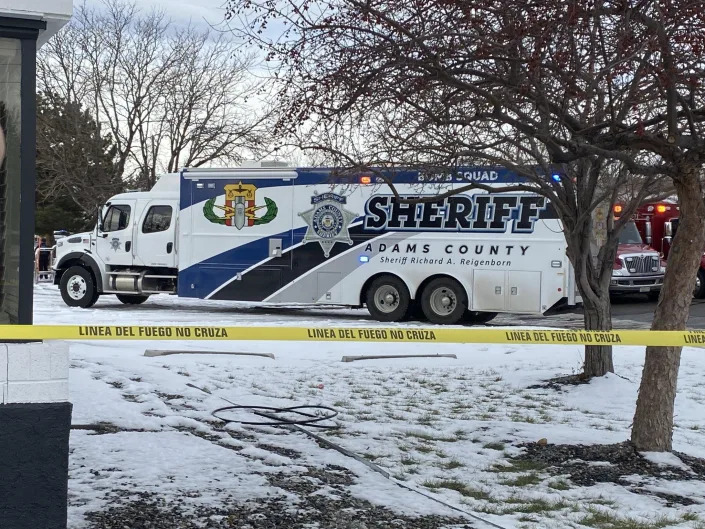 A large police and fire rescue presence, including an Adams County bomb squad truck, was seen at the Kingdom Hall of Jehovah’s Witnesses in Thornton on Sunday. / Credit: CBS

A fire was reported at the hall around 9 a.m. before another caller told police that a man had shot a woman and then himself, authorities said.

The man and woman were former members of the congregation, police said. Their names have not been released.

Luis Sanchez lives across the street and heard two gunshots Sunday morning. He told The Denver Post that he looked outside and saw a woman lying on the ground.

Later Sunday, police said that three incendiary devices were found at the scene, rendered safe and collected with the help of the Adams County Hazardous Materials Unit, according to NBC affiliate KUSA.

Thornton PD is investigating a homicide at Kingdom Hall, 951 Milky Way. Heavy police presence at the scene. There is no active threat. Updates here… pic.twitter.com/hg0M3YHwjP

“We are shocked and deeply saddened by the unprovoked attack and loss of life at our Kingdom Hall in Thornton. We are cooperating with the authorities as they carry out their investigation into the event. Our hearts go out to the family and friends of those who have been traumatized by the heinous actions that took the life of an innocent victim and threatened the lives of many others. We are praying for the families of all those affected.”

“The Thornton City Council and myself are saddened by the violent actions that took two lives in our city. This kind of violence is always shocking but particularly on Christmas Day. We understand the Thornton Police Department is in the early stages of the investigation and we will learn more in the days to come. For now, our hope is that we all can take time to focus on those we love and find a way to hold them close today.”

If you or someone you know needs help, please contact the National Suicide Prevention hotline at 988, or reach out to the Crisis Text Line by texting ‘Home’ to 741741, anytime.