A man has been shot dead near a popular cafe strip in Melbourne’s inner north in what police believe was a targeted attack.

Emergency services were called to Brunswick Street in Fitzroy at 4.15pm on Tuesday following reports a man had been found with life-threatening injuries. 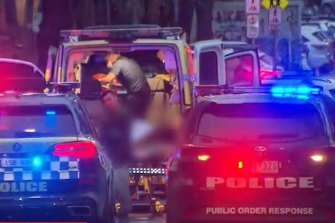 Officers believe the man, who is yet to be identified, was involved in an altercation with a group of people in a parked vehicle before being fatally shot.

Nine News Melbourne reported the man was getting out of a car when he was shot in the back by the driver, who sped off and remains on the run.

Passersby found the man lying in the street and called triple zero. Ambulance crews treated him at the scene, but he could not be saved.

Police cordoned off the area and established a crime scene following the incident. About a dozen officers, including homicide detectives, remained at the scene on Tuesday evening.

“Detectives are still working to determine the exact circumstances of the incident but at this stage it appears to be a targeted incident with the parties involved possibly known to each other,” police said in a statement.

Police said they would like to speak to anyone who witnessed anything or has CCTV or dashcam vision of the incident.

Anyone with information is urged to contact Crime Stoppers on 1800 333 000 or submit a confidential report online at www.crimestoppersvic.com.au.