ENTERTAINMENT NEWS
05/05/2022 Melana 0 Comments
The 23-year-old was arrested for assault with a deadly weapon after rushing the stage toward the end of Chappelle’s set at the Hollywood Ball this week. 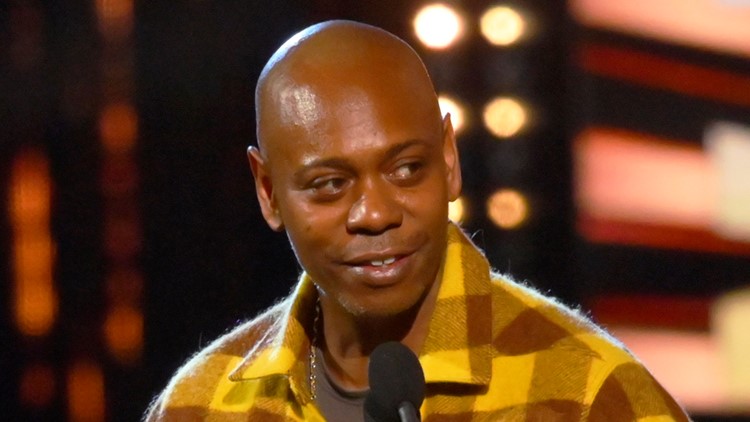 Credit: AP
FILE – Dave Chappelle appears during the Rock & Roll Hall of Fame induction ceremony on Oct. 30, 2021, in Cleveland. Chappelle was tackled during a performance at the Hollywood Bowl Tuesday, May 3, 2022. Security guards chased and overpowered the attacker, and Chappelle was able to continue his performance while the man was taken away in an ambulance. (AP Photo/David Richard, File)

LOS ANGELES — The man who tackled comedian Dave Chappelle during a performance at the Hollywood Bowl will not be charged with any felonies, the district attorney’s office said Thursday.

The 23-year-old was arrested for assault with a deadly weapon, police said, after rushing the stage toward the end of Chappelle’s set in the last of a four-night stint at the outdoor amphitheater as part of the “Netflix Is a Joke” festival.

He was carrying a replica handgun with a large blade that folded out of it similar to a pocket knife, according to a photo released by police.

“After reviewing the evidence, prosecutors determined that while criminal conduct occurred, the evidence as presented did not constitute felony conduct,” the Los Angeles County district attorney’s office said in a statement.

The case has been referred to the Los Angeles city attorney’s office, which prosecutes misdemeanors within the city. An email seeking comment from the office was not immediately returned.

Jail records showed the man was still being held Thursday in lieu of $30,000 bail, Mendez said. It was not immediately known if he had retained a lawyer, and the motive for the attack was unclear.

People standing in the wings of the stage, including actor Jamie Foxx and rapper Busta Rhymes, rushed on to the stage to try to help Chappelle.

Security guards chased and overpowered the man, who was taken away in an ambulance for treatment of an unspecified injury.

“The performances by Chappelle at the Hollywood Bowl were epic and record-breaking and he refuses to allow last night’s incident to overshadow the magic of this historic moment,” Chapelle’s publicist Carla Sims said in a statement.

Chappelle was attacked as he was wrapping up a routine in which he talked about how comedians have to worry more about their personal security in the wake of this year’s Academy Awards ceremony where the Oscar-winning actor slapped Chris Rock on live television in reaction to a joke about his wife.

Rock was also in the wings of Chappelle’s show, He grabbed the mic and jokingly asked, “Was that Will Smith?”