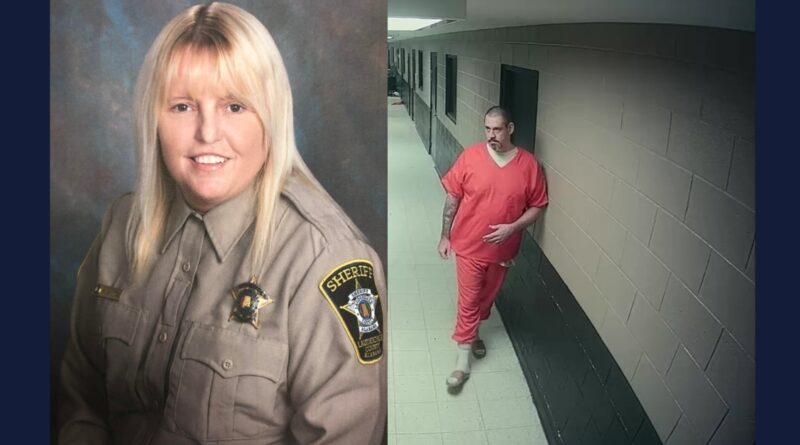 This article contains all information confirmed to News 19 in the manhunt for inmate Casey Cole White and now former corrections employee Vicky White after leaving the Lauderdale County Detention Center on April 29, 2022.

LAUDERDALE COUNTY, Ala. (WHNT) — The nationwide manhunt continues for an escaped Lauderdale County inmate and the corrections employee who helped him.

Law enforcement officials are looking for inmate 38-year-old Casey White and former Assistant Director of Corrections, 56-year-old Vicky White who were reported missing on April 29 after leaving the Lauderdale County Detention Center. Vicky was an employee with the Sheriff’s Office for 16 years. Despite sharing a last name, the two are not related.

They have been on the run for more than a week now. Here is everything News 19 knows so far:

Lauderdale County Sheriff Rick Singleton told News 19 that the night before Vicky helped the inmate escape – using a false claim that he had a mental health appointment at the courthouse – she stayed in a hotel near Florence Boulevard.

EDITOR’S NOTE: The Lauderdale County Sheriff’s Office says the surveillance video above is 1 hour, 10 minutes behind – the video is actually from just after 6:30 a.m. on April 29 – the day of the escape.

And, it appears, the hotel’s location was part of a larger plan. Investigators said Vicky White’s sheriff’s office car was found parked in Florence strip mall a few hours after the pair had left the jail.

Investigators learned the getaway car that she purchased a few days earlier – a copper-toned 2007 Ford Edge – was in the same lot the night before the escape. The hotel she stayed in was within walking distance of that lot at the Florence Square shopping mall, located at 180 Cox Creek Parkway.

Singleton says she drove her official car to work last Friday morning, picked up Casey White, and then switched vehicles. The pair haven’t been sighted since that day, according to authorities.

Vicky White, according to Singleton, had been talking about her retirement for the past three to four months, had talked about visiting the beach and had recently sold her home. Court documents show that White sold her home in Lauderdale County on April 18, 2022, for $95,550.

News 19 asked Singleton why he thought Vicky White, 56, stayed at the hotel, rather than with her mother, where she’d been living since selling her own home.

“This is just basically, strictly, my own opinion,” Singleton said. “I think she didn’t want to face her mother that morning, knowing that she was going to leave.”

There has been public speculation that Casey confessed to the Ridgeway killing to get moved out of the prison system and into the Lauderdale County Jail.

Casey White was transferred from Donaldson Correctional Facility in February 2022. His trial for two counts of capital murder was scheduled to start in June 2022.

Lauderdale County District Attorney Chris Connolly said Casey’s alleged confession to the killing spurred investigators to look at him as a suspect, and they didn’t stop there – they vetted his information and then charged him.

She had also turned in her retirement paperwork and April 29 was scheduled to be her last day on the job. Connolly told News 19 Vicky White went to several banks and withdrew $90,000 in cash from the sale of her house.

On April 29 at 9:20 a.m. Vicky White told a corrections deputy to prepare inmate Casey White to be taken to the Lauderdale County Courthouse for a “mental health evaluation”. He was taken from his cell to booking where he was handcuffed and shackles placed on his legs.

At 9:41 a.m. Vicky White leaves the jail with Casey White after telling the booking officer she is the only one available with firearm certification. She explained to the officer that she was going to drop Casey White off at the courthouse before heading to the Med Plus clinic because she wasn’t feeling well.

Vicky and Casey drove from the jail to the shopping center where the getaway car was parked and drove away in an unknown direction. The car was spotted in security footage at 9:49 a.m. at a local gas station at the intersection of Cox Creek and Huntsville Road as it passed.

At 11:34 a.m. a Florence Police officer saw the patrol vehicle left among other cars in a parking lot of a local shopping center.

At 3:30 p.m. the booking officer reports that all calls to Vicky White were going straight to voicemail and neither she nor Casey White had returned from the courthouse. The courthouse was searched and security footage showed they had never arrived for the nonexistent mental health evaluation.

Casey White has a history of violence, including a standoff with the Limestone County Sheriff’s Office in 2015 – at that time, Casey was wanted in two states.

Former Limestone County Sheriff Mike Blakely said in December 2015, White broke into his ex-girlfriend’s home, shot at two of her friends, and killed her dog. White then went on the hunt for a vehicle, attempting two carjacking before successfully taking a third.

Blakely said Casey asked the sheriff to intervene during a standoff at which Casey pointed guns to each side of his head, and threatened to kill himself.

Casey White would eventually confess to the 2015 murder of Connie Ridgeway, and he was charged with her murder in 2020. He later pleaded not guilty by reason of mental disease, and prosecutors said he was paid to kill Ridgeway.

A trial date was set for April 2022, leading to his return to the Lauderdale County Jail. However, his trial was continued in June.

The Limestone County Sheriff’s Office officially reopened the investigation into the mysterious death of Casey White’s ex-girlfriend in 2008 as the manhunt continues.

The investigation involves the death of 31-year-old Christy Shelton, who was shot to death with a sawed-off shotgun. Officials initially ruled her death a suicide.

At the time of Shelton’s death, police said White was there at her home in Lexington. But after an investigation, he was ruled out as a suspect.

Shelton’s family said they never believed that story. They asked questions about what exactly Casey was doing when Shelton was shot. Casey and Shelton were dating at the time and her family has taken to social media to push for a re-investigation into this case.

Somer Mitchell, the daughter of Christy Shelton, says when Casey White escaped with the assistance of prison guard Vicky White, it opened a range of uncontrollable emotions for her and her family who are seeking justice for her mother.

A spokesperson for the Limestone County Sheriff’s Office says that they are communicating with the family and reviewing the case.

The Lauderdale County Sheriff’s Office spoke with inmates at the jail about Casey White and Vicky White. Several inmates said the two had a “special relationship”.

While Casey White was in Donaldson Prison, Vicky White kept in contact with him over the phone. The sheriff’s office said the two had been in contact for two years and there is the potential they have been planning his escape throughout that time.

Almost a full week into the search, the U.S. Marshals Service released new photos and descriptions of both Casey White and Vicky White on Thursday, May 5, showing tattoos and possible hair changes to disguise themselves.

Casey stands at 6’9, weighs around 330 pounds, and has brown hair and hazel eyes. Officials say they believe he is affiliated with the Alabama-based white supremacist prison gang, Southern Brotherhood.

Vicky White, the jail’s assistant director of corrections, who officials say helped Casey escape is described as 5’5 and 145 pounds. She has blonde hair, though she may have dyed it a darker color.

At 4:53 p.m. the Lauderdale County Sheriff’s Office posted on Facebook that the two were missing and hadn’t been seen since that morning. By 5:30 p.m. 18-20 investigators are working on the case, the U.S Marshals, FBI, ATF, Secret Service and Alabama Law Enforcement Agency were asked to help.

At 7:27 p.m. the official Blue Alert was issued for Casey and Vicky White.

On Friday, April 29, federal arrest warrants were filed for both Whites, the Sheriff’s Office told the public the warrants were issued on Monday, May 2. Vicky White is wanted for first-degree facilitating an escape and Casey White’s new arrest warrant is for second-degree escape. On Monday, May 9, new charges were added to the warrant for Vicky White’s arrest. The new charges include identity theft and forgery after she used an alias to purchase the 2007 Ford Edge the two used to escape.

According to a release from the U.S. Marshals, the last time the two were seen was April 29 in Rogersville, Ala.

The getaway vehicle was found on Friday, April 29, abandoned in a rural area of Williamson County, Tenn., off Interstate-65, in the middle of the state. Officials said a tow truck driver called the Williamson County Sheriff’s Office Thursday, May 5 after seeing the SUV on the 6 p.m. news.

The SUV was found about 107 miles away from the Lauderdale County Detention Center, about two hours driving distance. The vehicle was brought to Lauderdale County Sheriff’s Office on Monday, May 9, for evidence processing.

On Monday, May 9 the U.S. Marshals released photos of a 2006 Ford F-150 truck that had been abandoned at a car wash in Evansville, Indiana on May 3. The South Weinbach Avenue car wash owner said he saw a man who appeared to be Casey White get picked up by another car with a driver that looked like Vicky White.

Ford F-150 believed to have been used and abandoned by Casey White and Vicky White.

Evansville is 175 miles north of Williamson County, Tenn., where the copper 2007 Ford Edge was discovered.

On Monday, May 9, a Cadillac Casey White and Vicky White were suspected of driving was spotted near the Vanderburgh Sheriff’s Office and law enforcement officials pursued. The chase on Highway 41 northbound involved the U.S. Marshals, FBI and Vanderburgh Deputies. Vanderburgh County Sheriff Dave Wedding said it was a short pursuit past Highway 57 and into a grassy area.

Law enforcement officials ended the chase by colliding with the Whites’ car and causing it to overturn. Wedding said after the crash Vicky White shot herself and was taken to a local hospital in serious condition.

Wedding explained Casey White turned himself in and was taken to the hospital with minor injuries.

“They’ve both been taken to local hospitals to be examined for their injuries,” Wedding said. “Her injuries are very serious. I don’t know the true extent, but I want to commend the Marshals Task Force for being here and working diligently with the Vanderburgh County Sheriff’s Office to put two bad people and get them off the street.”

There is no word at this time if the reward money will be issued to anyone.