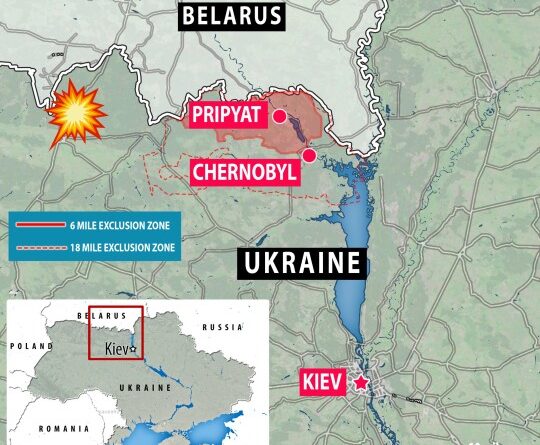 An airstrike map appears to show that a military strike hit an area near Chernobyl on Thursday.

Multiple missile attacks have battered Ukraine since Russia launched an invasion likely to spark the worst war on European soil since 1945.

One of those incidents seems to have occurred around the Chernobyl zone, north of Kyiv and west of a major river.

Though it is thought to have been around 26 miles from the exclusion zone around one of the world’s most radioactive areas, the precise location of where the strike hit has not been officially confirmed.

At 8.36am in the Odessa region in the city of Podilsk, a bombing left six dead, seven wounded, and 19 missing, according to the Ukrainian Interior Ministry.

Then around two minutes later, in the city of Mariupil, Donetsk region, one person was killed and two were injured during shelling.

In the city of Kryvyi Rih, Dnipropetrovsk region, there were three strikes on military depots and the bridge over the Ingulets River was bombed.

Another missile was captured on camera hitting an airport in Ivano-Frankivsk, western Ukraine.

Chernobyl was the scene of a major nuclear disaster in 1986, when Ukraine was still part of the Soviet Union.

An exclusion zone still remains in place around the area following the incident 36 years ago, which caused a huge evacuation and has been linked to thousands of deaths since.

One of the world’s most radioactive zones is protected by Ukrainian forces, with troops seen conducting urban warfare drills there earlier this month.

Meanwhile, tanks are confirmed to be moving from Belarus into Ukraine, with the country under attack on at least three fronts.

Hundreds are feared dead after Russia’s initial attack and it is unclear what will come next, though planes have been sighted over Kyiv.