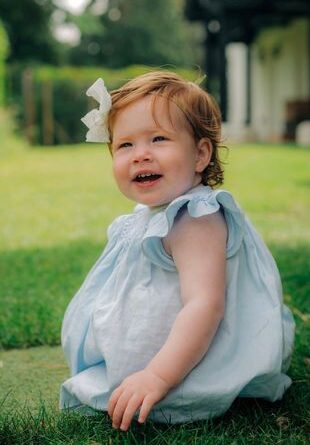 Prince Harry and Meghan Markle have released a new picture of daughter Lilibet after celebrating her first birthday on Saturday.

It is understood the “candid and spontaneous” image was taken by photographer Misan Harriman at a birthday picnic.

Friends and family also attended the event, which was held at Frogmore Cottage, in Windsor.

The duke and duchess have been “incredibly touched” by the birthday wishes that have flooded in for Lilibet, who is named after the Queen.

Lilibet’s birthday picnic even featured a cake from baker Claire Ptak, who made one for Harry and Meghan’s wedding in 2018.

It was such a privilege to celebrate the 1st birthday of Lilibet with my family and hers! Joy and face painting all around ❤️🎂🎉 pic.twitter.com/bg3RY6MOEu

The latest picture of Lilibet has been released after the Sussexes flew back to the US following their trip to England for the Queen’s Platinum Jubilee.

The Sussexes were not among those in the royal box at Saturday’s star-studded live concert in front of Buckingham Palace, which was attended by the Prince of Wales, the Duchess of Cornwall, and the Duke and Duchess of Cambridge.

Saturday was Lilibet’s birthday and a spokesperson for the couple had said on the weekend they were spending the day privately.

The couple reportedly left the UK prior to the conclusion of the final events marking the Queen’s 70 years on the throne.

This weekend was the first public appearance Harry and Meghan have made alongside the Duke and Duchess of Cambridge since moving to the US two years ago.

The Duke and Duchess of Sussex outside St Paul’s Cathedral (Image: UK Press via Getty Images)

The couples were on opposite sides of St Paul’s Cathedral for a thanksgiving service held in honour of the Queen.

Kate and William sat in the front row with Prince Charles and Camilla, while Harry and Meghan were beside their cousins Princess Eugenie and Beatrice and husbands Edoardo Mapelli Mozzi and Jack Brooksbank.

Some speculated that Kate Middleton’s outfit for the thanksgiving service was a subtle nod to Harry and Meghan.

Treacy is said to be one of Meghan Markle’s favourite designers and Kate also notably wore a very similar design at Harry and Meghan’s wedding back in 2018.

Royal fans around the world have donated more than £79,800 to the World Central Kitchen, one of the charities the Sussexes’ Archewell Foundation has been supporting, to celebrate Lilibet’s birthday.

The organisation provides meals for those affected by humanitarian, climate and community crises and is said to be especially near to the couple’s hearts.

José Andrés, a founder of the World Central Kitchen, previously told TIME: “Springing into action is not the easy choice for a young duke and duchess who have been blessed through birth and talent, and burned by fame.

Prince Louis Pulling Funny Faces at the Jubilee: In Pictures