Police say a suspect concocted a plan to rob a food delivery driver by placing a bogus order over the weekend in Pennsylvania. FOX 29 Philadelphia reports.

A woman shot and killed a suspected carjacker in self-defense last month when he was trying to drive off in her car in a North Las Vegas neighborhood, police said this week, according to a report.

The victim and a friend had parked near another friend’s house as they waited to go inside for an early Thanksgiving dinner on Nov. 19 when a car parked in front of them, they told Las Vegas Metropolitan Police, according to FOX 5 Las Vegas.

Two or three men got out of the car and allegedly pulled the woman out of the driver’s seat and her friend out of the passenger’s side. One of the suspects got in but couldn’t figure out how to drive it because it was a push-to-start.

When the victim realized the suspect had placed the gun in his lap to figure out the car, she grabbed it and ran, telling her friend to run, too. 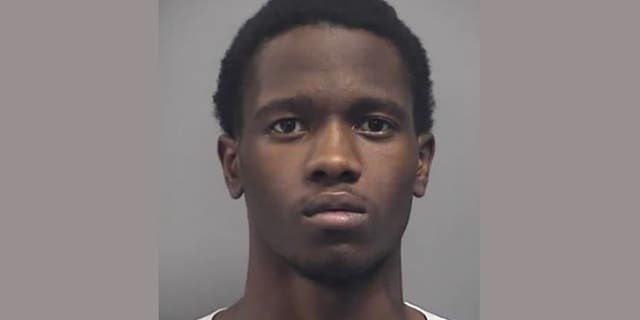 Jaylin Morrison was charged with kidnapping, conspiracy to commit robbery, attempted robbery with a deadly weapon, burglary with the use of a deadly weapon and attempted grand larceny of a vehicle. (Las Vegas Metropolitan Police Department)

As she tried to run away, the suspect tackled her and wouldn’t let her go. She turned and shot him, police said.

She then ran and hid in the side yard of a house as a second suspect started shooting at her. He fled before police arrived and found the suspect lying dead in the street bleeding from his head.

She was taken into custody but was released without arrest when police determined she had acted in self-defense.

Nearly two weeks later, a suspect identified as Jaylin Morrison was arrested after his car was seen on surveillance footage driving around the area that night. He was a known associate of the suspect who was shot.

It’s unclear if there are any suspects at large.

Anyone with information is asked to call Crimestoppers at 702-385-5555, police said.