Alec Baldwin is seen brandishing a revolver and pointing it toward the camera in footage released by the Santa Fe County Sheriff’s Office on Monday as part of its investigation into a fatal shooting on the set of “Rust.” The footage was shot on the same day that cinematographer Halyna Hutchins was shot and killed when a gun that Baldwin was holding fired. The actor has stated that he did not pull the trigger. “Rust” director Joel Souza was also shot in the shoulder after the bullet went through Hutchins’ torso. 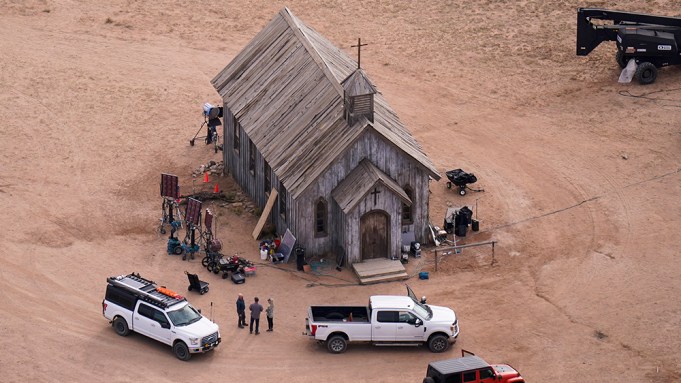 In the footage released Monday, Baldwin is sitting in a church pew, outfitted in Western costume. At one point his right hand dips into his jacket, where the actor draws a revolver and points it toward the camera. He does the same action a second time.

The information released by the sheriff’s office includes video of Souza in the emergency room, talking to an investigator about what happened. In it, Souza says that the armorer handed an actor the gun, and told the police officer that he thought the armorer, Hannah Gutierrez-Reed, said the weapon was either “cold” or “clean” (meaning that she thought it only contained blanks, not live rounds).

“There was a bang — there was a louder bang than I’ve heard come from a blank before,” he said.

The department also released video from the set on the day of the shooting showing police talking to a stricken-looking Gutierrez-Reed, who tells the officer, “I’m the armorer…at least I was.”

In a text message, propmaster Sarah Zachry told another crew member that Gutierrez-Reed had always wanted to use fake weapons on set, which she claimed went against Baldwin’s wishes.

In another exchange just two days after the shooting, Zachry tells Baldwin that “I’m truly praying for you and hope you find some rest soon.” To which Baldwin replies, “you are lovely and kind.” Later, he adds, “this sheriff’s dept still will not tell me that I won’t be charged w something.”

On April 20, New Mexico’s Occupational Health and Safety Bureau gave a $136,793 fine to Rust Movie Productions and said that it had found that the “Rust” production company had not developed any process to make sure live rounds were not present on the movie set, a violation of safety standards.

On Monday, the Santa Fe County Sherriff’s Department turned over a portion of the fatal “Rust” shooting investigation to the First Judicial District Attorney’s Office.