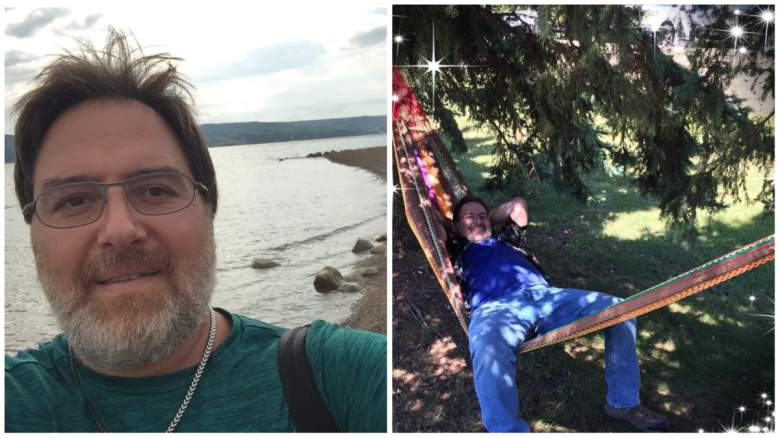 Nicolae Miu is identified in jail records as the man accused of stabbing a 17-year-old boy to death and injuring four other people who were tubing on the Wisconsin Apple River, a popular tourist activity in northwest Wisconsin.

Authorities have not released Miu’s name as the suspect. However, jail records give his age as 52 (the age of the suspect), his arrest date as July 30, 2022, and the charges match the incident. On Facebook, Miu, who went by the name Nick Miu, wrote posts in support of gun control, sharing one that read, “guns don’t kill people, people kill people.” His profile picture is the American flag.

Miu is accused of one count of first-degree intentional homicide, four counts of mayhem, and four counts of aggravated battery – intend great bodily harm. He lives in Prior Lake, Minnesota, according to online records. Heavy contacted the St. Croix County Jail to obtain the public record mugshot of Miu, and jail officials said that would be released via a press release. Authorities previously confirmed that the suspect is from Minnesota.

Officials have not released a motive, but the aunt of some of the victims wrote on Facebook that they were trying to protect younger kids from Miu.

“You stabbed my two nephews and their two friends for trying to protect the younger kids you went after. I hope you rot in prison!” she wrote.

“Everybody was tubing,” including the victims and suspect. They were “simultaneously going down” the Apple River, St. Croix County Sheriff Scott Knudson said in a July 30, 2022, news conference.

A 52-year-old Minnesota man is in custody, the St. Croix County Sheriff’s Department wrote in a news release and the sheriff confirmed. The suspect’s name and motive have not yet been released.

1. Miu, Who Lives in Minnesota, Is a Married Man Who Works as an Engineer

According to his Facebook page, which is under the name Nick Miu, Miu “works at Ritchie,” went to Robbinsdale Armstrong Senior High, studied mechanical engineering at South Dakota State University, lives in Prior Lake, Minnesota, and is from Bloomington, Minnesota. He is married.

He works as a design engineer, according to a cache of an old LinkedIn page.

The suspect was with a group of six-eight people, and the victims were in another group. The sheriff said authorities want to interview about 15-20 people. Authorities aren’t sure what started the incident.

“We located five individuals that were suffering from stab wounds,” Knudson said. Four people were transported to a hospital. One person was deceased. The four surviving victims are three males and a female. The sheriff did not have their hometowns.

The tubing area is located in Somerset, Wisconsin. Knudson called it “chaotic, scary. I am sure that anybody who witnessed this will never forget it. It is a tragedy, and I feel really bad for the families.”

According to Travel Wisconsin, “The Apple River is a 77.5 mile-long tributary of the St. Croix River. Outfitters in and around Somerset provide rentals and transportation for this popular tubing river. The first half of the trip offers relaxed family floating. The last half features a wild rapids area for the daring and a walkway along the side for the less adventurous.” 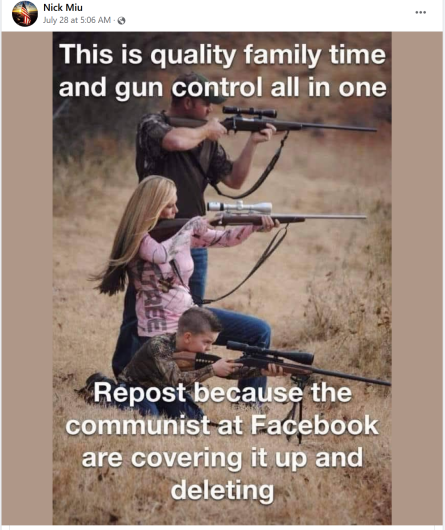 Miu’s top post on Facebook showed a man, woman and young child aiming long guns with scopes. “This is quality family time and gun control all in one. Repost because the communist at Facebook are covering it up and deleting.” He shared the post on July 28, 2022.

He shared a post in March 2020 that read, “I believe in the right to keep and bear arms. A Facebooker has challenged all gun owners to put this on their wall. The U.S. Supreme Court has affirmed the right to keep and bear arms is a fundamental right of an individual. If you believe in the 2nd Amendment, and you are not afraid to show it, re-post this!! Guns don’t kill people, people kill people.”

A woman wrote on his comment thread, “Quality family time? Like when an innocent 17 year old gets stabbed to death while enjoying some innocent Saturday fun on a river!? Wow.”

On July 21, 2022, Miu shared photos of boating on Prior Lake and wrote, “Lots of fun on Prior Lake….very busy!….great time with our friends….”

He also made a post about Twitter permanently suspending the account of the Republican running to challenge Rep. Ilhan Omar. The post called on “patriots” to reshare it. Nick Miu also shared a post critical to Bernie Sanders, as well as showing former President Barack Obama and Hillary Clinton in jail. 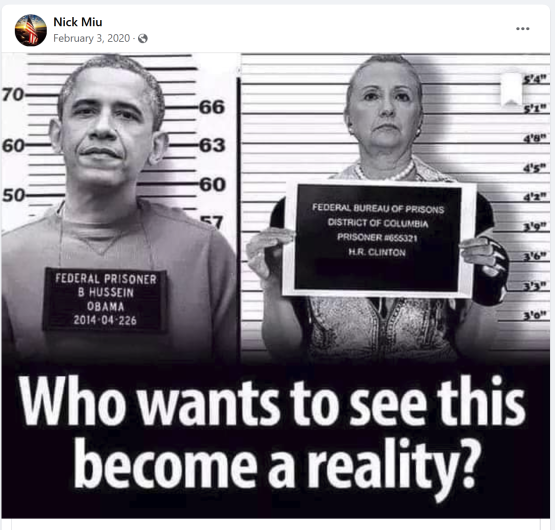 Another said, “The coronavirus won’t last long because it’s made in China.”

3. The Suspect Left the Scene After the Stabbings, the Sheriff Says

BREAKING: One person is dead and four others in critical condition after a stabbing on the Apple River in Somerset, Wisconsin, a popular tubing area. Authorities say the suspect is now in custody and it’s unclear if it was a random attack. @WCCO pic.twitter.com/NNuAfwU88N

Deputies arrived and, with the help of other people and “tubers,” they began to administer life-saving measures and evacuate people. People suffered a “range of knife wounds,” he said.

The surviving victims are all in their early 20s. A perimeter was set up and mutual aid was called for, the sheriff said. Authorities located the suspect with the help of witnesses, and he was taken into custody without incident.

The victims suffered torso and body injuries. Authorities are searching the area for the knife. The sheriff said someone had taken a photo of the suspect. Knudson said it’s been maybe 15 years since a stabbing had taken place in the area. “I don’t know what to make of it,” he said.

“It’s best for me not to speculate what was the tipping point today,” said Knudson.

The suspect was not previously known to authorities. One victim was “walking wounded” but all victims have critical injuries, the sheriff said.

4. There Is No Further Threat to the Public, Officials Say

Please be advised, the St. Croix County Sheriff’s Office responded to a critical incident on the Apple River in the Town of Somerset. Five people received stab wounds and are currently in a range of serious to critical condition. A Suspect has been located and TAKEN INTO CUSTODY, there’s no further threat to the public. We’re still actively investigating this incident. The names of the victims and suspect are being withheld at this time. Sheriff Knudson will provide an official press release at a later time.

5. A woman Whose Son Was There Wrote, ‘My Heart Is Breaking’

St. Croix County Sheriff Scott Knudson say a 17-year-old Minnesota boy died from his stab wounds. The other four victims in critical condition include a woman and three men, all in early 20’s. @WCCO pic.twitter.com/mU6cK3Lpd8

“This is so rare for our area here. There has to be more to this story. Going down the apple doesn’t have to be and usually isn’t dangerous. Good job everyone for ending the madness but let’s not let this be a continued trend in our absolutely beautiful village,” one woman wrote.

Another woman wrote, “My son was there, thankfully he answered right away. He had already left when the incident took place. Until I heard his voice, I was in a nightmare. My heart is breaking for the family of the deceased.”