May 27, 2016, was the day that Johnny Depp and Amber Heard’s marriage went from private misery to a public, career-killing spectacle.

Heard, who had just filed for divorce, arrived at a Los Angeles courthouse that day to seek a temporary restraining order, showing up with a clear mark on her face, which she says Depp inflicted during a fight six days prior. Photographers captured the scene, and the allegations became tabloid fodder across the globe.

Depp says he never hit her, and now he’s suing Heard for libel in Fairfax County Circuit Court. On Wednesday, jurors in the case heard from police officers who responded to the couple’s penthouse immediately after the fight. None of the officers saw the red mark that was so prominent six days later.

Officer Tyler Hadden, one of the officers who responded to the couple’s penthouse apartment on May 21, 2016, said Heard refused to talk to officers and had no signs of an injury, although he acknowledged she’d been crying and was red-faced. 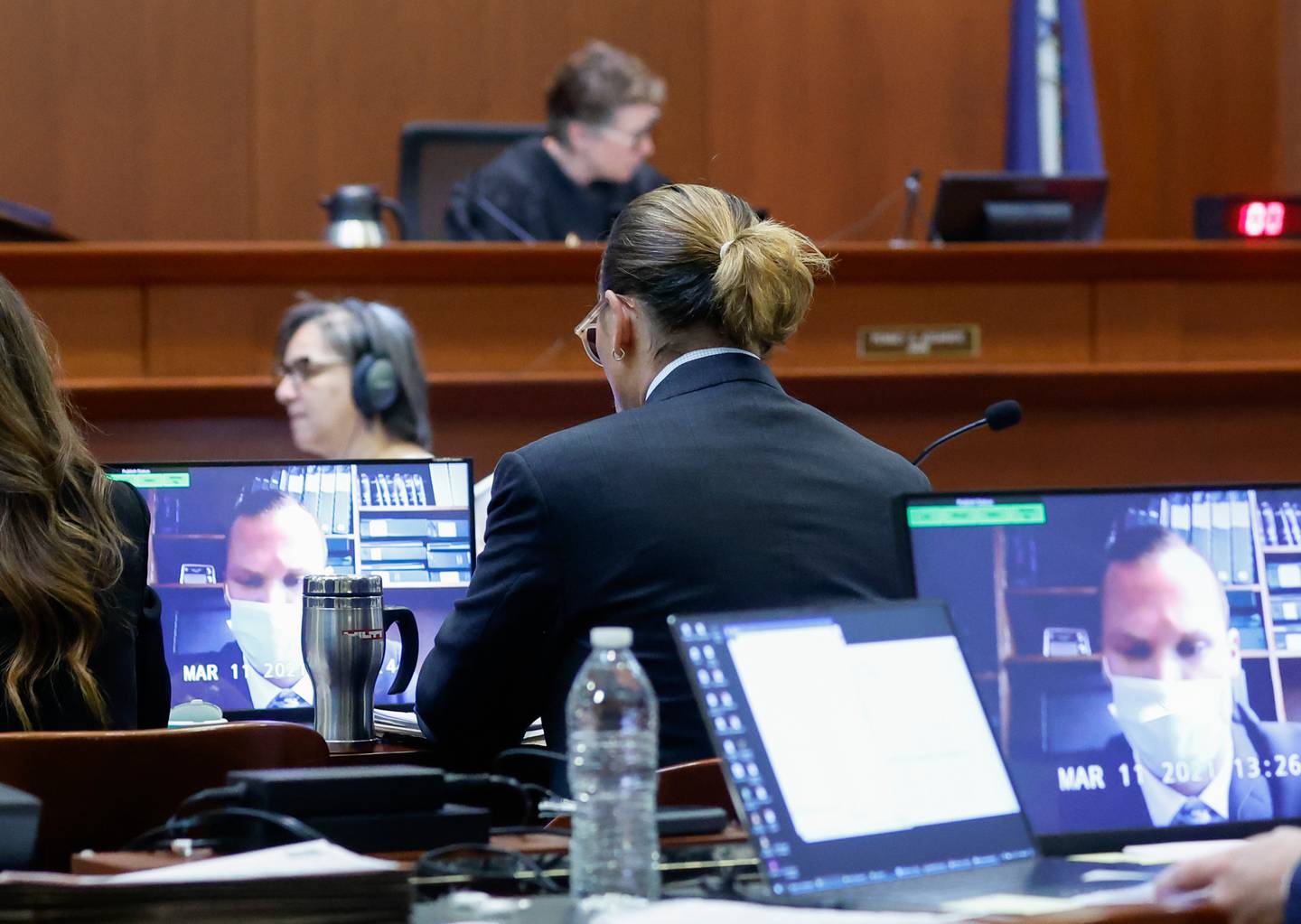 “Just because I see a female with pink cheeks and pink eyes doesn’t mean something happened,” he said in a recorded deposition played for jurors.

Depp had already left the penthouse by the time officers arrived. Officers said they had no idea who Heard was, or that she was married to Depp. He said neither Heard nor anyone at the penthouse complex was willing to tell him or the other officers who Heard’s husband was.

Jurors heard similar testimony on Tuesday from an officer who accompanied Hadden to the penthouse.

An officer who made a follow-up visit that night, William Gatlin, testified that he saw no injuries either, though he acknowledged that his visit was brief and he got no closer than 3m from Heard. He said his check was a perfunctory one because it appeared that the call was just a duplicate of the one that Hadden had already responded to. 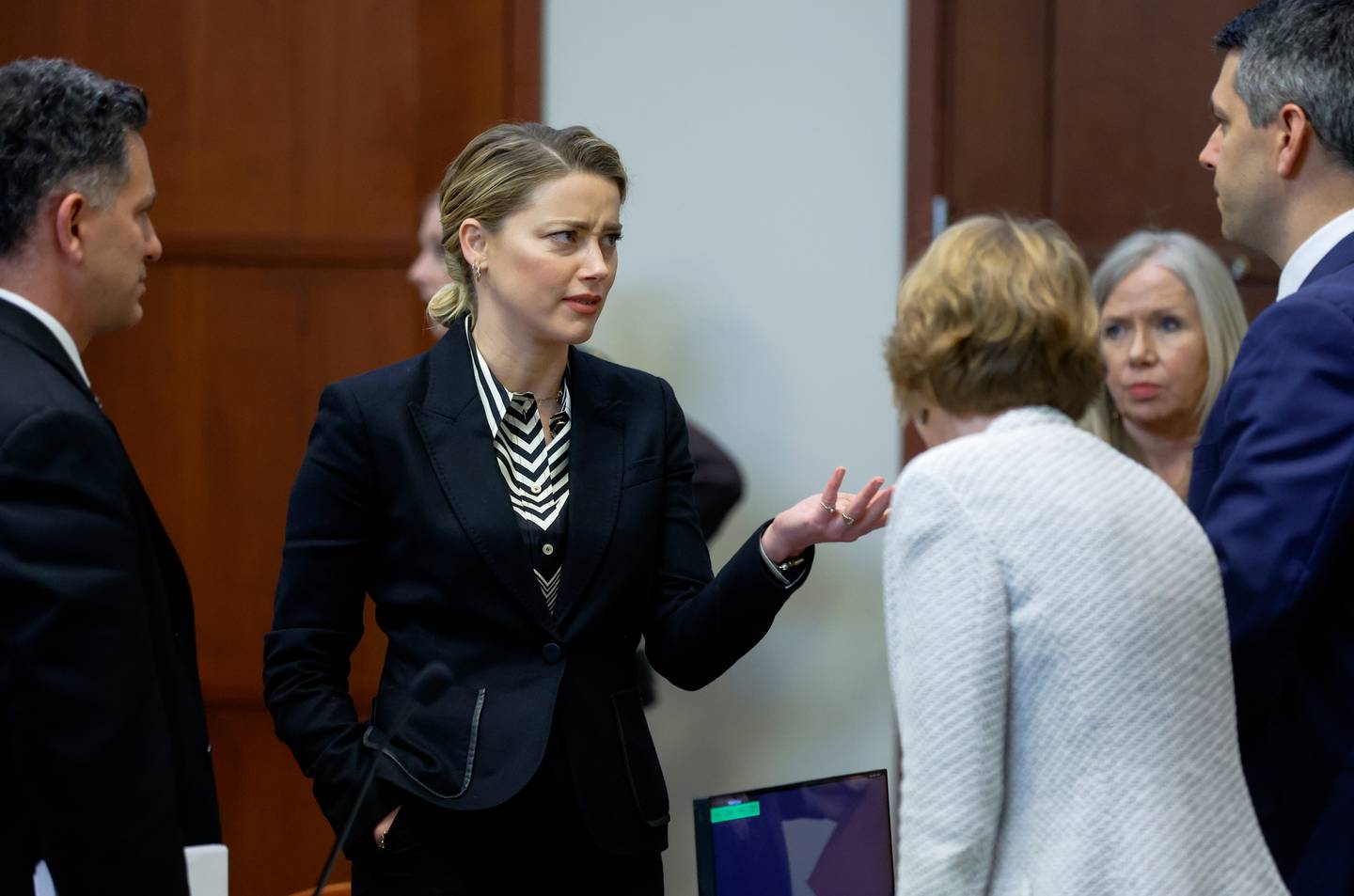 Amber Heard speaks to her legal team in the courtroom. Photo / Jonathan Ernst, Pool via AP

The jury saw a bodycam video of Gatlin’s response, which was less than two minutes. Heard could only be seen at a distance.

Heard’s lawyers, in their questions, have suggested that Heard could have covered her injuries with makeup because at that point she still wanted to protect Depp. They also asked officers why they didn’t investigate a potential case of domestic violence more thoroughly.

The officers’ testimony is some of Depp’s best evidence that Heard contrived the allegations against her ex-husband. It complements earlier testimony from witnesses who say they saw Heard and her sister practising fake punches in the days after the attack.

It’s far from definitive, though. Heard’s lawyers have yet to put on their case, and some of her friends say they were at the penthouse when Depp allegedly attacked her.

And even if jurors were to conclude that Depp never assaulted his wife on May 21, they have heard evidence of other alleged assaults before and during the couple’s brief marriage.

Depp sued Heard for libel after she wrote an op-ed piece in the Washington Post in 2018 referring to herself as “a public figure representing domestic abuse”. The article doesn’t mention Depp by name, but his lawyers say the article defames him nevertheless because it’s a clear reference to the highly publicised allegations Heard made when she filed for divorce in 2016 and obtained a temporary restraining order as well.