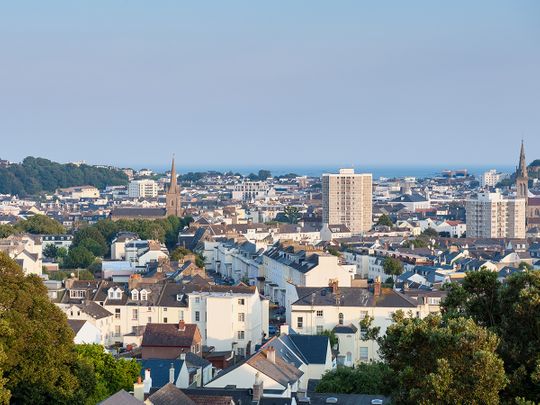 A fire was put out but emergency services are still working at the scene, police say

London: One person was killed and several others were missing after a “devastating” explosion on Saturday at a block of flats in Jersey’s capital St Helier, police on the Channel island said.

A fire was put out but emergency services are still conducting “significant work” at the scene of the flattened building, the police said, as a line of ambulances queued up.

#Breaking: Just in – Reports of at least 1 person killed and at least 12-14 other people missing, after an apartment block explosion around 04:00 AM at #Jersey island in the port city of Saint Helier. pic.twitter.com/R0Q7Huys9G

“We have a three-storey building that has completely collapsed – described from a demolition point of view as a pancake that has dropped almost straight down,” he said.

“There is also damage to a nearby building as well, another block of flats that the fire service needs to make safe. It is a pretty devastating scene, I regret to say.”

Photographs on social media showed thick smoke billowing above the blaze in St Helier before dawn.

Smith said that “around a dozen” people were missing, “but you will appreciate also that number could fluctuate”.

“Specialist resources” have been mobilised to find anyone trapped in the rubble, according to the police.

One person had died and two others were taken to hospital, Smith said, describing them as “walking wounded”.

Jersey’s chief minister Kristina Moore expressed condolences for the fatality and said residents displaced by the blast were being found somewhere to stay.

“This is going to take some days and we will keep everyone updated and fully informed, and we will do our very best to ensure everybody is properly looked after,” she said.

The incident caps a tragic week for Jersey, a British Crown dependency not part of the United Kingdom, whose economy relies on banking, tourism and fishing.The coastguard on Friday abandoned a search for three Jersey fishermen missing for nearly 36 hours after their boat hit a freight ship.

The fishing boat, L’Ecume II, sank in about 40 metres of water, too deep for divers to search without specialist equipment, the Jersey Coastguard said.

Fisherman William Jackson said he had known Michieli since he was child.

“He’s probably one of the most prominent fishermen on the island and in the community,” Jackson told BBC Jersey.

“I was just shocked, absolutely shocked. The whole thing didn’t make any sense really,” he said, stressing that conditions were “perfect” when L’Ecume II had set sail.