Uncategorized
14/04/2022 Melana 0 Comments
Going against the request of the Kent County Prosecutor’s Office, the Grand Rapids Police Dept. is sharing video footage of a fatal shooting.

The incident happened Monday, April 4 just after 8 a.m. near the intersection of Griggs Street and Nelson Avenue SE in Grand Rapids.

Authorities said a GRPD officer initiated a traffic stop on a vehicle with a faulty license plate. Lyoya, who was driving the vehicle, fled from police on foot.

After a physical struggle with the officer, Lyoya was shot and killed. GRPD Chief Eric Winstrom confirmed the officer’s body camera was found at the scene, but said it wasn’t clear how it came off.

Lyoya’s family disputes these claims, saying that Lyoya’s car had broken down in the street. He had stepped out of the car to see what the problem was when a GRPD officer arrived.

His family says he and the officer argued, then the officer got ahold of him and put him on the ground. The officer then shot Lyoya in the back of the head, the family says.

GRPD Chief Eric Winstrom said during a news conference last week that the officer would be interviewed 72 hours after the incident, as is common police practice.

However, seven days after the shooting, MSP told 13 ON YOUR SIDE that the officer had not yet been questioned.

WHO IS PATRICK LYOYA

Patrick Lyoya was a 26-year-old Congolese refugee. His family fled the Democratic Republic of the Congo to the United States fearing violence.

Lyoya was his parents’ firstborn son, and has five younger siblings. He was also a father to two daughters.

Friends described him as a hard worker and a big fan of soccer.

13 ON YOUR SIDE previously spoke with his father, Peter Lyoya, through an interpreter.

“I didn’t believe that this could ever happen to me in this country,” Peter said. He says his family came to the United States for a safer life. “And I’m asking myself, ‘why did I come here?'” 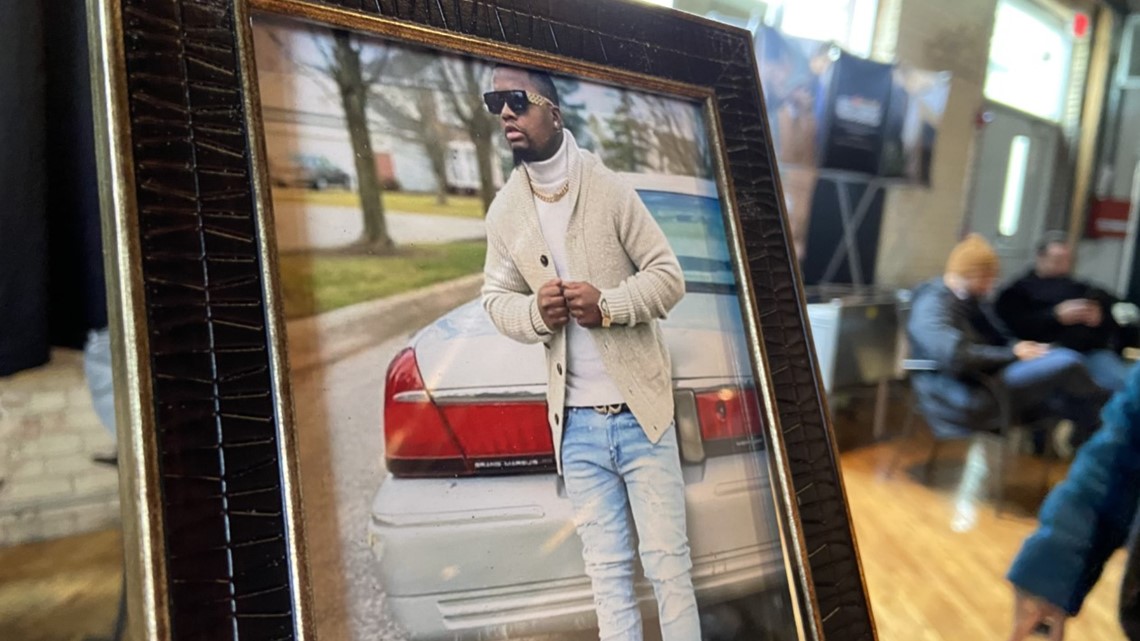 Credit: Justin Bachman, 13 On Your Side WHAT THE VIDEO SHOWS, AND DOES NOT SHOW

GRPD said that some of the video was redacted to “protect the privacy of some,” but that audio was not been edited. First, police showed the in-squad video of the car.

The in-car dashcam video shows Patrick Lyoya getting out of the vehicle as soon as the officer rolls up. 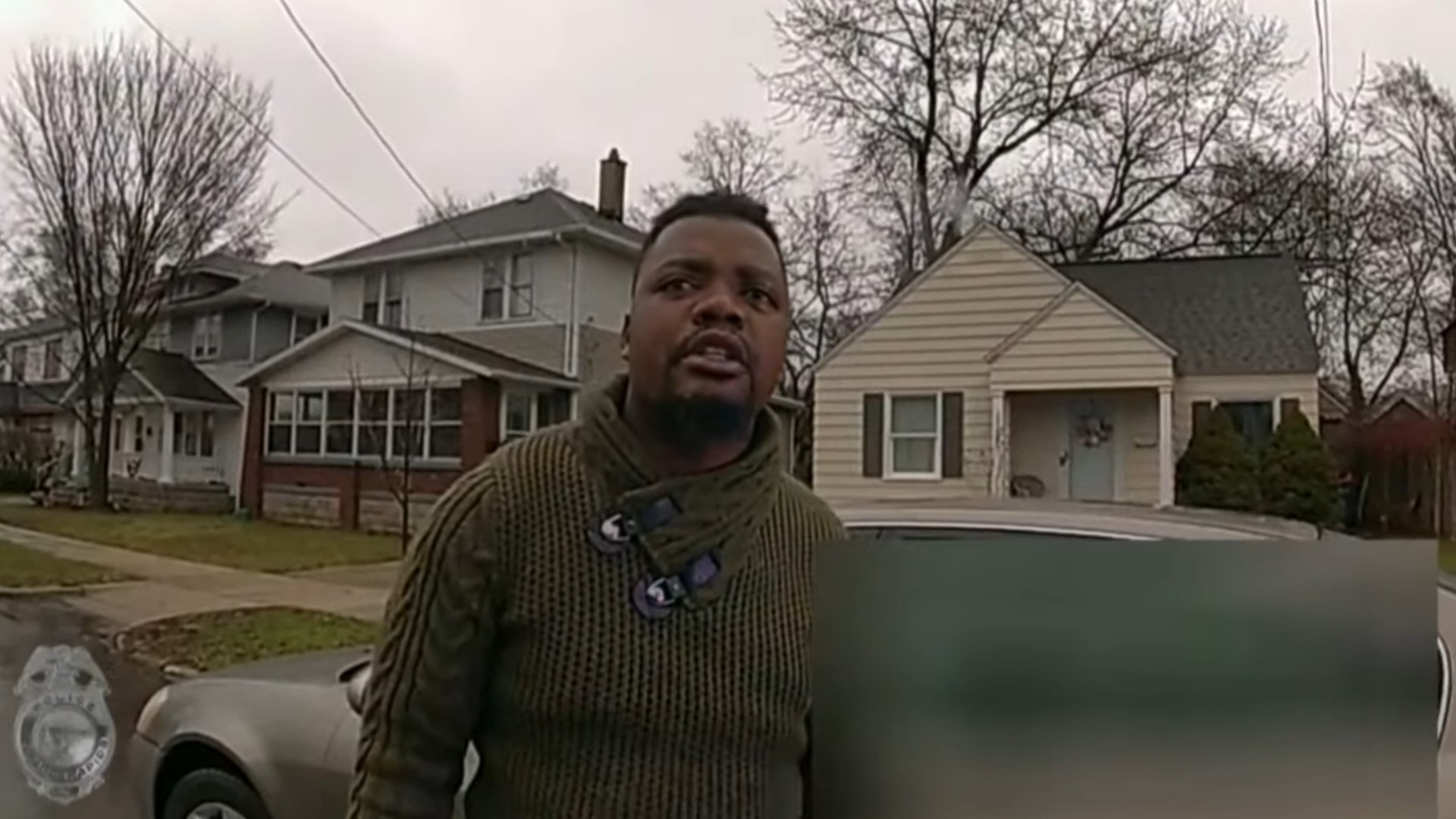 After speaking for a few moments, the officer attempts to push Lyoya onto the hood of his car and put handcuffs on him.

Video shows Lyoya push the officer, and a struggle ensues.

The fatal shooting occurs out of frame from this dashcam video angle.

Next, authorities showed the angle of the officer’s body camera.

Patrick Lyoya asks the officer what’s going on, and the officer can be heard asking him to get back in his car.

This angle shows the officer struggling with Lyoya on the ground, and at times pushing his head onto the ground.

After a struggle on the ground, the officer and Lyoya stand up with Lyoya’s hands behind his back.

You can see the officer pull out his taser to attempt to subdue Lyoya.

The officer can be heard yelling several times, “Stop resisting,” and “Let go of the taser!”

A neighbor’s surveillance video captures the fatal gunshot from a distance.

Patrick’s friend, who was in the passenger’s seat at the time the officer arrived, pulled out his cellphone and recorded the incident.

Authorities released this video as well.

From this angle, you can see the officer get on top of Lyoya’s back before pulling out his firearm, putting the firearm to Lyoya’s head at point-blank range, and then firing the weapon.

After that point, he backed away from Lyoya as backup arrived.

CALLS FOR AND AGAINST RELEASING THE FOOTAGE

The release of the footage comes after increasing community pressure to do so.

GRPD Chief Winstrom, who is in his second month on the job, made a vow to make the video available no later than noon on Friday, April 15.

“Since this tragic event occurred on Monday morning and in the hours and days that followed, I have been consistent in my commitment to transparency. I have publicly stated my intention to release the video next week and I intend to keep that promise. I have also committed to protecting the integrity of the investigation in the interests of justice and accountability,” Winstrom said in a statement.

It was released on Wednesday.

I will release the video from Monday’s officer involved shooting no later than noon on Friday, April 15th pic.twitter.com/y9kBz9FH3d

Days after the incident, Kent County Prosecuting Attorney Christopher Becker indicated his office will not be releasing any evidence related to the shooting. He asked involved police agencies to do the same.

Becker said doing so will help “maintain the integrity of this investigation.”

Ultimately, it is up to the discretion of the Grand Rapids Police Department to release the video, which they have chosen to do.

Kent County Commissioner Robert S. Womack, who has lost family members to gun violence, has been outspoken in demanding authorities to release the video all while asking the community to remain peaceful.

Lyoya’s family, who viewed the video before it was released, is also calling for transparency.

His office issued this statement on Monday, April 11:

“The Lyoya family came to our country in pursuit of the American dream, but instead are now living a traumatic American nightmare as they have to bury their loved one due to police brutality. We are once again reminded of how swiftly a police interaction can turn deadly for Black men in America and just how far we have to go to change that.

“From what Patrick’s father has expressed after viewing the body camera footage, we believe that the release of the footage will show the true and raw narrative of how Patrick lost his life to police. We will continue to push for the public release of the footage from this incident and full transparency from Michigan State Police as they continue to investigate this tragic incident.”

Crump is an attorney who specializes in civil rights cases and has represented the families of Ahmaud Arbery, Breonna Taylor, and George Floyd.

A large group gathered in Grand Rapids on Saturday, April 9 to protest the death of Lyoya.

A vigil was held after the march to remember Lyoya.

Watch part of the protest below (disclaimer: profanity may be used during this video, please use caution):

On Sunday, community members gathered for a forum to talk about the death of Lyoya.

The discussion focused on “community-based discourse, dialogue and dissemination of information” surrounding Lyoya’s death. While the event was partially to inform attendees and call for justice, it also aimed to comfort Lyoya’s family and those impacted by his death.

The forum was held Sunday at 3 p.m. at the Renaissance Church of God in Christ Family Life Center in Grand Rapids.

This forum came a day after community members marched in memory of Lyoya, calling for footage of the shooting to be released.

Crump’s law firm was officially hired by the Lyoya family. He says their current focus is on releasing the body and dash camera footage, and after, they’re hoping for due process and the prosecution of the officer responsible.

On Tuesday, April 13, community activists and others organized a rally and march to the Grand Rapids City Commission meeting.

More than a hundred people marched through downtown to voice their opinions to city leaders during the public comment portion of the meeting.

GRPD Chief Eric Winstrom was in the crowd, and speakers often directly addressed him and other commissioners to voice their concerns about police actions in the city.

WHAT’S NEXT IN THE INVESTIGATION

The Michigan State Police are investigating this fatal shooting.

Detectives will interview eyewitnesses and comb through over evidence, including both the body camera footage and dash cam footage taken during the altercation.

Once complete they will hand over their findings to the prosecutor’s office who will determine what’s next.

GRPD said it’s standard practice to wait for MSP’s investigation to be complete before they launch an internal affairs review. The Office of Oversight and Public Accountability will monitor the investigations and review any findings.

The OPA will also make recommendations on any necessary policy improvements that may be brought to light as a result of the investigation.

Authorities are asking anyone who has any additional information or video to contact Silent Observer at (616) 774-2345.

During a community forum this past weekend, powerhouse attorney Ben Crump visited with Lyoya’s family and indicated he’s hoping for due process and the prosecution of the officer responsible.