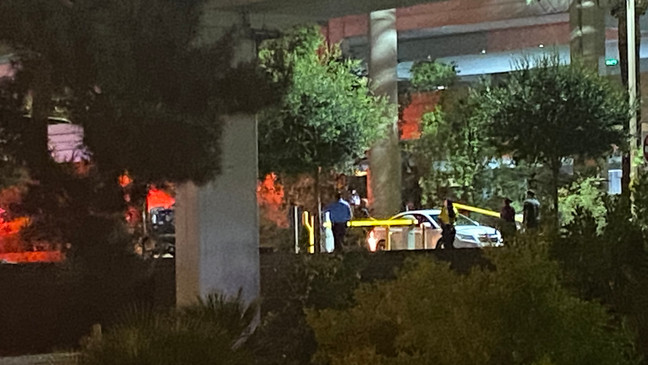 Security stands outside a shattered glass door at MGM Grand in Las Vegas on Saturday, July 16, 2022. Las Vegas police say the sound from the glass being shattered resulted in reports of a shooting on the Strip, but investigators have found no evidence of gunfire. (Photo courtesy D. Stamos / Helodriver @SpacecoastPix via Twitter)

Police said initial reports indicated there was gunfire at the MGM Grand valet area around 10:42 p.m.

Reports of a shooting near the MGM tonight are unfounded. Initial reports are a glass door shattered causing a loud noise which startled people in the valet area.

Officers responded and learned a glass door had been shattered, creating a loud sound.

“There is no evidence of gunfire in the area and the event is under investigation,” LVMPD said in a statement.

The person who broke the glass door was detained on suspicion of destruction of property, Clarkson said.

Video posted to social media showed people scrambling across the Strip, including one video that showed officers moving with guns drawn and lowered near New York-New York as several people hurried in the opposite direction.

Photos from Twitter user D. Stamos/Helodriver showed security standing outside a shattered glass door entrance to MGM Grand, with a large rock or brick lying next to the door, broken in pieces.

MGM Resorts tweeted late Saturday that normal operations were resuming at MGM Grand and its other properties.

The World Series of Poker Twitter account said players were being let back in late Saturday after being asked to clear the tournament area.

So I just left the @MGMGrand through the front valet entrance and the broken doors and rocks are still visible there. Security has part of the area cordoned off and repairs are underway. @NateSilver538 pic.twitter.com/duQAb8CvbI

The Las Vegas Strip and the surrounding resort corridor were the sites of the One October mass shooting in 2017.

Fifty-eight people were killed and hundreds were injured when a gunman opened fire on a music festival near Las Vegas Boulevard that night. Two people died months after the shooting from the injuries they sustained, and LVMPD recognizes the official death toll as 60.

It remains the deadliest mass shooting in U.S. history.