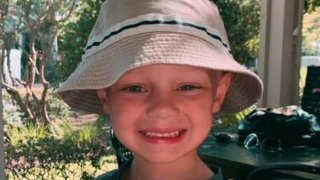 Cooper Roberts, the 8-year-old boy who was paralyzed in the Highland Park Fourth of July parade mass shooting, remains “very critical,” according to his family, after undergoing his seventh surgery.

“Please keep sending love and prayers to my son as he continues to fight as hard as he can,” Cooper’s mother Keely Roberts said in a statement on Friday.

Doctors on Wednesday reclosed the original bullet-induced tear in Cooper’s esophagus, and when he woke up Thursday morning, doctors were encouraged that Cooper had no fever and was breathing over the ventilator, according to the family’s spokesman, Anthony Loizzi.

As the day progressed, however, spikes of fevers up to 104 returned and a CT scan revealed fluid building in Cooper’s esophagus, lungs and now around his pelvis, Loizzi said.

As a result of the developments, Cooper remains on a ventilator and breathing tube.

“The family is very grateful for the outpouring of support and well-wishes and asks for continued prayers for Cooper’s healing,” Loizzi said.

Earlier in the day Tuesday, the Roberts family said the young boy was in critical condition due to a partially collapsed lung and had taken steps backward in recovery. Cooper, who is under a care of doctors at Comer Children’s Hospital in Chicago, had previously been upgraded to serious condition, but on Monday underwent a procedure to address damage to his esophagus which revealed a tear in Cooper’s esophagus had reopened.

Cooper was attending the Fourth of July parade with his twin brother, mother and father when a gunman fired more than 70 rounds into the crowd. Cooper was struck in the abdomen and has suffered significant injuries, including a severed spinal cord, Loizzi previously said. He is currently paralyzed from the waist down.

“He is in a great deal of pain – physically and emotionally – especially as the family had to share with him the devastating news that he is paralyzed from the waist down,” a statement from Loizzi read over the weekend.

“The family wishes to acknowledge and thank the many, many people – emergency medics, police, fire department, nurses and doctors at both hospitals — who did extraordinary things to save Cooper’s life,” a weekend statement from the family read.

“It was a true miracle. And to thank from the bottom of their hearts the thousands who have prayed, sent gifts, supported the family in myriad ways and donated to the Go Fund Me campaign for Cooper’s long-term care:”