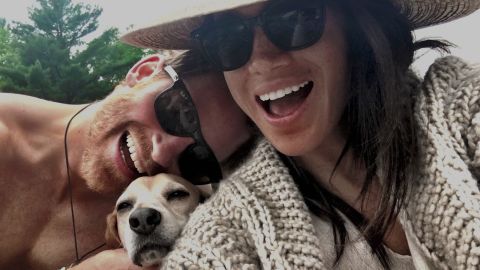 CNN — Prince Harry said it was “terrifying” to have his brother, Prince William, scream at him during his bitter split from the royal family, in the final installments of the Duke and Duchess of Sussex’s controversial Netflix documentary that were released Thursday.

The fourth, fifth and sixth episodes of “Harry & Meghan” cover the pair’s challenges since their 2018 wedding, Meghan’s deteriorating mental health and her 2020 miscarriage, and ultimately their decision to quit as working members of the family.

Harry said he initially asked for a “half in, half out” arrangement, where Harry and Meghan would have their own jobs but still work in support of the Queen, during a crunch family meeting. “But it became very clear very quickly that that goal was not up for discussion or debate,” Harry said.

“It was terrifying to have my brother scream and shout at me, and my father say things that just simply weren’t true, and my grandmother quietly sit there and take it all in,” he said, recalling the conversations with Prince William, then-Prince Charles, and Queen Elizabeth II.

“But you have to understand that from the family’s perspectives, especially from hers, there are ways of doing things. And her ultimate mission and goal, responsibility, is the institution … she’s going to go on the advice that she’s given,” Harry said.

The pair describe throughout the new episodes how, in their view, their position within the royal family became untenable after constant hounding from Britain’s media and repeated disregard for the couple’s wellbeing inside palace walls.

Harry hinted that there was jealousy from other royals towards Meghan given the amount of media attention she was initially receiving. “The issue is when someone who is marrying in, who should be a supporting act, is then stealing the limelight or is doing the job better than the person who is born to do this,” he said.

“That upsets people. It upsets the balance. Because you have been led to believe that the only way that your charities can succeed and your mission can grow is if you are on the front pages of those newspapers.”

The series also touches on Meghan’s deteriorating mental health and her miscarriage in July 2020. “I was pregnant. I really wasn’t sleeping. The first morning that we woke up in our new home is when I miscarried,” Meghan said.

She described experiencing suicidal ideation, telling the filmmakers she believed “all of this will stop if I’m not here. And that was the scariest thing about it, it was such clear thinking.”

“The lies, that’s one thing. You kind of get used to that when you live within this family,” Harry added. “But what they were doing to her, and the effect it was having on her… enough. Enough of the pain, enough of the suffering.”

“I just did everything I could to make them proud, and to really be a part of the family,” Meghan said in the fifth episode, speaking of her relationship with the other royals. “And then the bubble burst.”

Courtesy of Prince Harry and Meghan, The Duke and Duchess of Sussex

The couple described the breakdown in their relationship with the royal institution.

A family and business ‘in direct conflict’

The highly anticipated Netflix documentary marks the Sussexes’ latest attempt to reclaim the narrative surrounding their departure from royal life.

It features details on the increasingly tense relationships between Harry and his brother, WIlliam, and his father, King Charles III. And it emphasizes the suggestion that the royals wanted to sideline and isolate the couple, often through the planting of negative media reporting, rather than have them dwarf more senior royals in popularity.

“My dad said to me: ‘Darling boy, you can’t take on the media. The media will always be the media,” Harry said, describing the palace’s relationship with news outlets as a “dirty game.”

Buckingham Palace reiterated it will not comment on the documentary on Thursday. Royal engagements are meanwhile continuing, with King Charles and Camilla, the Queen Consort, set to visit a community kitchen in London and attend a carol service with the Prince and Princess of Wales and other members of the family.

The culmination of the breakdown between the royal institution and Harry and Meghan, who were once touted by parts of the media as the modernizing force the monarchy needed, was their historic and controversial decision in early 2020 to quit as working royals and leave the UK.

Harry said he spoke to Queen Elizabeth II and arranged to meet her, with Meghan, before that split was finalized.

“She knew that we were finding things hard. I’d spoken to her many times about it,” Harry said. But as the meeting approached, Meghan said they received a message from an aide telling them they were not allowed to see the monarch.

“I’ve actually been told that I’m busy all week,” the Queen then told Harry, according to his recollection. “I was like, wow,” Harry said. “This is when a family and a family business are in direct conflict … really what they’re doing is blocking a grandson from seeing his grandmother,” added Meghan.

The couple were critical of the Queen’s aides but again were again complimentary of the late monarch herself, who died aged 96 in September, shortly after filming concluded for the series.

Their documentary, and Harry’s upcoming memoir, focus more attention on the difficult relationship between the prince and his father, King Charles.

It remains to be seen whether the venture will enhance the reputation of the couple as they look to sculpt their post-royalty personas.

Six in 10 Brits believe it was a bad idea for the duke and duchess to release the Netflix documentary, according to a Savanta poll of 2,250 British adults carried out online between December 9 and 11, between the release of the first and second parts of the series.

The same poll found that Harry and Meghan both have negative approval ratings among the British public – -3 and -19 respectively, when subtracting those with a negative opinion from those with a positive one – unlike the high popularity of Prince William (+60) and Charles III (+36).