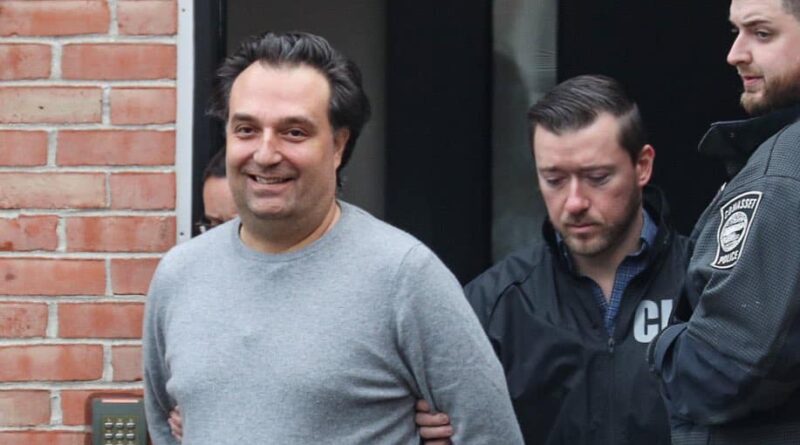 By Julianne Lima and Bryan Lambert

QUINCY, Mass. — A man accused of misleading an investigation into the disappearance of his wife, a missing Cohasset mother who hasn’t been seen for a week, was ordered held on $500,000 bail on Monday after prosecutors say a bloody knife was found in the basement of her home.

Brian Walshe, 46, was arraigned in Quincy District Court on charges he misled law enforcement officials who have been working to track down the whereabouts of his wife, Ana Walshe. A not guilty plea was entered on his behalf.

Brian was walked into the courthouse under police escort shortly after 9 a.m., less than 24 hours after he was taken into custody.

Husband of missing Cohasset woman arrives at court for arraignment

During the court hearing, a prosecutor told the court that a blood-covered knife was found in Ana’s home following a search over the weekend. Surveillance video from inside a Home Depot in Rockland also showed Brian buying a tarp, mops, tape, and other cleaning supplies, the prosecutor added.

“He’s on surveillance at that time, on Jan. 2, even though he said he never left the house,” the prosecutor said. “Crime services recovered and found blood in the basement area…There was also a knife that was found. On the knife, there was blood.”

In the days after Ana was reported missing, Brian also allegedly lied about trips to Whole Foods and CVS.

“These various statements caused a lot of delays, to the point that during the timeframe when he didn’t report his wife, that gave him time to either cleanup evidence, dispose of evidence,” the prosecutor told the court.

Brian told Cohasset police that Ana Walshe was supposed to take a rideshare to Logan Airport on New Year’s Day in order to fly to Washington D.C. Ana works for Washington D.C.- based real estate company Tishman Speyer and owns a second home in the nation’s capital.

According to Cohasset Police Chief William Quigley, a family member last saw her in her Cohasset home between 4:00 a.m. and 5:00 a.m. on New Year’s Day. There is no indication she ever arrived at the airport and Walshe’s cellphone, credit and debit cards have been inactive since her disappearance on Jan. 1.

On Friday, Jan. 6, members of the Cohasset Police Department and the Massachusetts Special Emergency Response Team began combing the woods near Walshe’s Cohasset home. The ground search was suspended on Saturday, with authorities announcing they would not actively resume the search unless they gained new information that warranted its renewal.

Despite the announcement of the suspended search, police cruisers descended on the Walshe’s home Sunday morning. Massachusetts State Troopers and Cohasset police officers could be seen filing in and out of the Walshe’s home. Three children were also spotted being shuttered into cars that then drove away from the house. Ana and Brian Walshe have three children together.

According to a law enforcement source, the couple’s three boys are now in state custody.

A spokesperson for the Cohasset Police department told Boston 25 News on Saturday that detectives from the town’s police department and Massachusetts State Police arrived in Washington D.C. Saturday before returning Sunday.

Sources told Boston 25 News that a search warrant had been executed at the Walshe’s Cohasset home.

Bojana Bogosav, a news editor in Ana’s homeland of Serbia, told Boston 25 that concern has been growing among family and friends.

“This is a big story here because a woman from Serbia goes to America, living American dream, and after that, she disappears, she has a husband, but husband is very mystery because he was arrested,” Bogosav said.

Brian previously pleaded guilty in federal court two years ago after prosecutors say he took two Andy Warhol paintings from a friend in South Korea, put the authentic art for sale on Ebay, then delivered fake paintings to a buyer. He is on house arrest pending the outcome of that case.

Ana has not yet been found.

Quigley said that situation is not related to his wife’s disappearance.