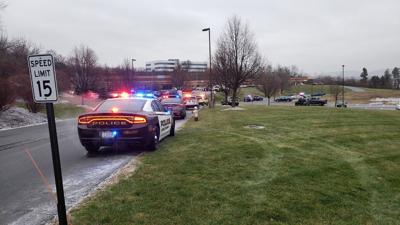 Police and emergency medical crews responded to a Wyomissing medical complex where there was a report of multiple shooting victims Thursday morning.

The shooter is no longer a threat, investigators said, adding that Wyomissing police will issue a statement soon.

Police blocked off the entrance to the area, and dozens of police and law enforcement swarmed the scene. Several ambulances were also on scene.

Authorities have not yet commented on what happened.

An ambulance is at the scene where Wyomissing police said there were multiple shooting victims behind Digestive Disease Associates, 1011 Reed Ave., on Thursday morning. (BILL UHRICH – READING EAGLE)

Spring Township police posted on their Facebook page that their investigators are assisting Wyomissing police. The post stressed there is no ongoing threat to the community.

This story will be updated as soon as more information become available.