Adam Levine was seemingly mocked by Sumner Stroh for his recent statement related to the cheating allegations. Adam Levine gets mocked by Sumner Stroh in new post.

Adam Levine has been hitting the headlines after the singer was accused of cheating on his wife Behati Prinsloo by model Sumner Stroh who also leaked their private DMs. After Stroh’s TikTok video about Levine went viral, the singer released a statement on his Instagram account and denied cheating on his wife but maintained that he “crossed a line.”

While Stroh did not directly react to Levine’s statement, she shared a cryptic post on her Instagram account which simply said, “Someone get this man a dictionary.” The message seemed to be a shade at the Maroon 5 frontman, whose statement was also slammed by Selling Sunset’s Chrishell Stause on Twitter. In his statement, Levine stated that he used “poor judgment” in speaking with anyone other than his wife in a flirtatious manner but maintained that he did not have an affair.

As for Stroh whose video about Levine went viral, in a second TikTok post, she also apologized to Behati and said, “I’m not the one getting hurt in this. It’s Behati and her children. And for that, I’m so, so sorry.” Adam and Behati tied the knot in 2014 and are also parents to two daughters, Dusty and Gio. The couple is currently expecting their third together. 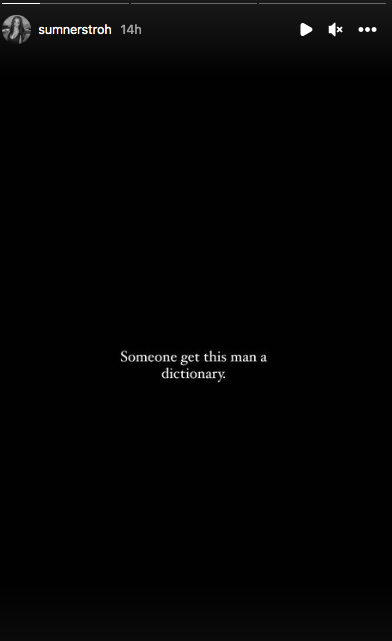 Among other reactions that have come up related to Levine’s scandal also include model Emily Ratajkowski who herself recently split from husband Sebastian Bear-McClard amid his alleged cheating scandal. The model shared a TikTok video speaking about women being blamed for men’s mistakes.