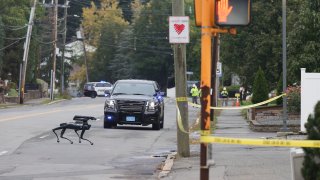 NBC10 Boston /A robot is used as part of police’s response at a gas station in Stoneham, Massachusetts

There is an ongoing police presence Tuesday morning at a gas station in Stoneham, Massachusetts, after a suspicious item was found, according to authorities.

The parking lot of the Mobil gas station by the corner of Route 28 and South Street is blocked off, as Stoneham police, Stoneham fire and Massachusetts State Police all investigate. Law enforcement appears to be using a bomb-detecting robot during their response to the situation.

The incident has caused several road closures in the immediate area, including parts of Route 28, South Street and North Border Road.

Additional information has not been released by law enforcement.