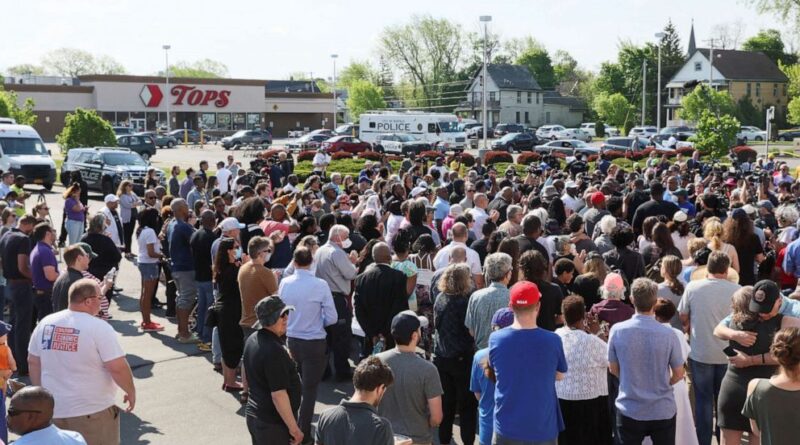 “There was evidence that was uncovered that he had plans, had he gotten out of here, to continue his rampage and continue shooting people,” Buffalo Police Commissioner Joseph Gramaglia told CNN. “He’d even spoken about possibly going to another store.”
There is “some documentation” the suspect had plans possibly for a shooting at “another large superstore,” Gramaglia said. “He was going to get in his car and continue to drive down Jefferson Avenue and continue doing the same thing.”
It “appears” the suspect planned to kill more Black people, Erie County District Attorney John Flynn said. “We need to drill down further,” he added.
The revelations align with information written in an 180-page racist manifesto authorities have attributed to the suspect, an 18-year-old White man who traveled nearly 200 miles to a supermarket in a predominantly Black neighborhood to unleash an attack. 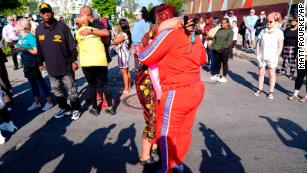 A ‘hero’ security guard, a former fire official’s mother and a teacher were among the 10 people killed at a Buffalo grocery store
Eleven of the 13 people shot were Black, officials said, and the massacre is being investigated as a hate crime. The victims range in age from 20 to 86, police said, among them a former police officer who tried to stop the gunman and a 62-year-old doing her regular grocery shopping with her fiancé.
The shooting, which also left three wounded, was a “straight-up racially motivated hate crime from somebody outside of our community,” Erie County Sheriff John Garcia said. “This was pure evil.”
The gunman killed several people in the parking lot before entering the building. He exchanged gunfire with an armed security guard — who was killed — and shot more people inside, then exited and surrendered to police.
Investigators believe the suspect had been in Buffalo a day before the shooting and did some reconnaissance at the Tops Friendly Markets store, Gramaglia has said. They also believe he acted alone, he said.
The suspect, Payton S. Gendron, pleaded not guilty Saturday night to a charge of first-degree murder, Buffalo City Court Chief Judge Craig Hannah told CNN, and the district attorney has said he expects to file more charges. Gendron is in custody without bail and under suicide watch, Garcia said. If convicted, he faces a maximum of life in prison without parole.
“I’m sad, I’m hurt, I’m mad because I never thought this would have happened here in the city of Buffalo,” resident Liz Bosley told CNN affiliate Spectrum News NY1. 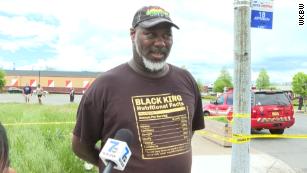 ‘I still don’t even believe it happened’: Shooting witness describes attack
Kelly Galloway’s family shops at the grocery on Saturday mornings, she told the station. “That could have been our mothers, our grandmothers, our aunts, our uncles,” she said. “And it was us. It was us.”
Buffalo Mayor Byron Brown spoke Sunday to worshipers at a church, saying of the slain: “Their lives and their example should be examples to us, that we have to love more, we have to care about each other more because we don’t know when our time might come.”
Those at the supermarket “were going about their daily lives, left in the morning and had every expectation that they’d be home at night with their families,” he said. “Many of us stood shoulder to shoulder yesterday in pain, like all of us are in pain, dealing with the aftermath of this horrible, racist, violent attack on our community.” 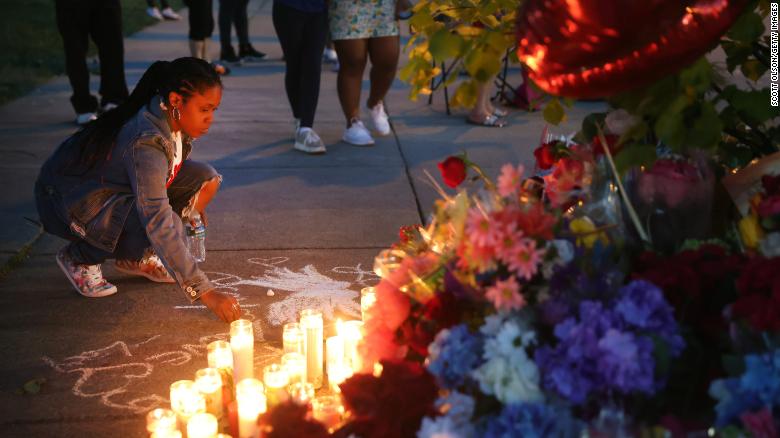 A woman chalks a message Sunday at a makeshift memorial outside of a Tops grocery store in Buffalo.

Local and state officials, with the FBI and federal Bureau of Alcohol, Tobacco, Firearms and Explosives, are digging for more information about the shooting and the gunman’s intent.
“We continue to investigate this case as a hate crime, a federal hate crime, and as a crime perpetrated by a racially motivated, violent extremist,” Stephen Belongia, special agent in charge of the FBI Buffalo field office, said Sunday at a news conference.
The gunman began a livestream of the attack, with the video removed less than two minutes after the violence began, livestreaming service Twitch said in a statement to CNN. 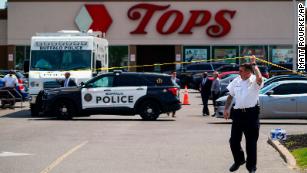 Shooting suspect charged with murder in court appearance
Authorities will be “looking at extensive digital platforms, computers, phones, cameras and anything else that comes into play in this investigation,” Gramaglia said Sunday.
“The evidence that we have uncovered so far makes no mistake that this is an absolute racist hate crime. It will be prosecuted as a hate crime,” Gramaglia said. “This is someone who has hate in their heart, soul and mind.”
Evidence may include a 180-page manifesto attributed to the suspect and posted online just before the attack. CNN independently obtained the document shortly after the mass shooting — before authorities released the name of the suspect — and law enforcement sources have told CNN its description of guns matches the weapons the suspect used.
In it, the suspect allegedly details how he had been radicalized by reading online message boards and describes the attack as terrorism and himself as a White supremacist. He subscribed to a “great replacement” theory — the false belief that White Americans are being “replaced” by people of other races. Once a fringe idea, “replacement theory” recently has become a talking point for Fox News’ host Tucker Carlson as well as other prominent conservatives.
The manifesto’s author also writes the supermarket in Buffalo is in a ZIP code that “has the highest black percentage that is close enough to where I live.” 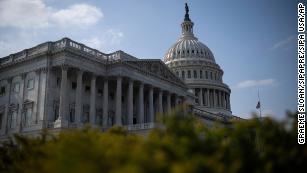 ‘Replacement’ conspiracies driving gunmen creep into mainstream politics
The ZIP code that includes the store, 14208, is 78% Black — the highest percentage of Black population of any ZIP code in upstate New York — the US Census Bureau’s 2020 American Community Survey finds. The shooting suspect is from the town of Conklin, a three-and-a-half-hour drive from Buffalo.
The manifesto also states the suspect bought the main gun he used, a Bushmaster XM-15, from a gun store before “illegally modifying it.”
“We are obviously going through (the manifesto) with a fine-toothed comb and reviewing that for all evidence,” prosecutor Flynn told CNN.
The suspected gunman had been on the radar of police about a year ago, officials said.
As a student last June at Susquehanna Valley Central High School, he made a “generalized threat” that was not racially motivated, Gramaglia said. The student was brought in for a mental health evaluation and released after a day and a half, he said.
The New York State Police investigated and responded to a report that a 17-year-old student had made “a threatening statement” in June at the same high school, an agency spokesperson confirmed to CNN. The student was taken into custody and to a hospital for a mental health evaluation.

Saturday’s attack stunned those who live in the heart of the Kingsley and Masten Park neighborhoods.
Geraldine Talley, 62, was doing her regular grocery, shopping with her fiancé Saturday when she was shot and killed, her niece Lakesha Chapman told CNN.
“She’s sweet, sweet, you know, the life of the party,” Chapman said. “She was the person who always put our family reunion together, she was an avid baker … mother of two beautiful children.”
“We’re outraged,” she added. “This is not, obviously, the first racially triggered attack in America. However, it is the first that hits our home.”
New York Gov. Kathy Hochul announced $2.8 million for the victims and their families, her office said in a statement.
“The entire world is watching how we will come together as New Yorkers to overcome this unthinkable tragedy. Buffalo, my hometown, is the City of Good Neighbors and New York State will be good neighbors for them,” she said. 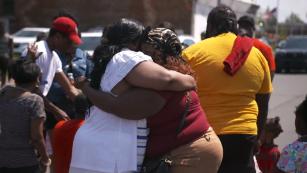 With the grocery closed because of the investigation, Tops Markets is working with a representative of the Masten District to secure free food and supplies, plus free transportation, for those in need it, it said.
The supermarket is in a so-called “food desert” — where access to fresh foods and groceries is limited — and “served as the lone supermarket within walking distance for many Buffalonians,” Hochul said.
The mayor called the site “near and dear” to his heart.
“It’s one that I patronize from time to time,” Brown said Saturday, “my family patronizes from time to time, and some of the victims of this shooter’s attack are people that all of us standing up here know.”