“The decision to end a marriage is never easy, but we have grown apart,” Bündchen said in a statement.

Quarterback Tom Brady and supermodel Gisele Bündchen’s marriage is truly over, with the couple posting separate statements on their Instagram stories Friday morning announcing that they have finalized a divorce after 13 years of marriage.

“In recent days, my wife and I finalized our divorce from one another after 13 years of marriage,” Brady wrote. “We arrived at this decision amicably and with gratitude for the time we spent together. We are blessed with beautiful and wonderful children who will continue to be the center of our world in every way. We will continue to work together as parents to always ensure they receive the love and attention they deserve.

“We arrived at this decision to end our marriage after much consideration,” Brady’s statement continued. “Doing so is, of course painful and difficult, like it is for many people who go through the same thing every day around the world. However we wish only the best for each other as we pursue whatever new chapters in our lives that are yet to be written.” 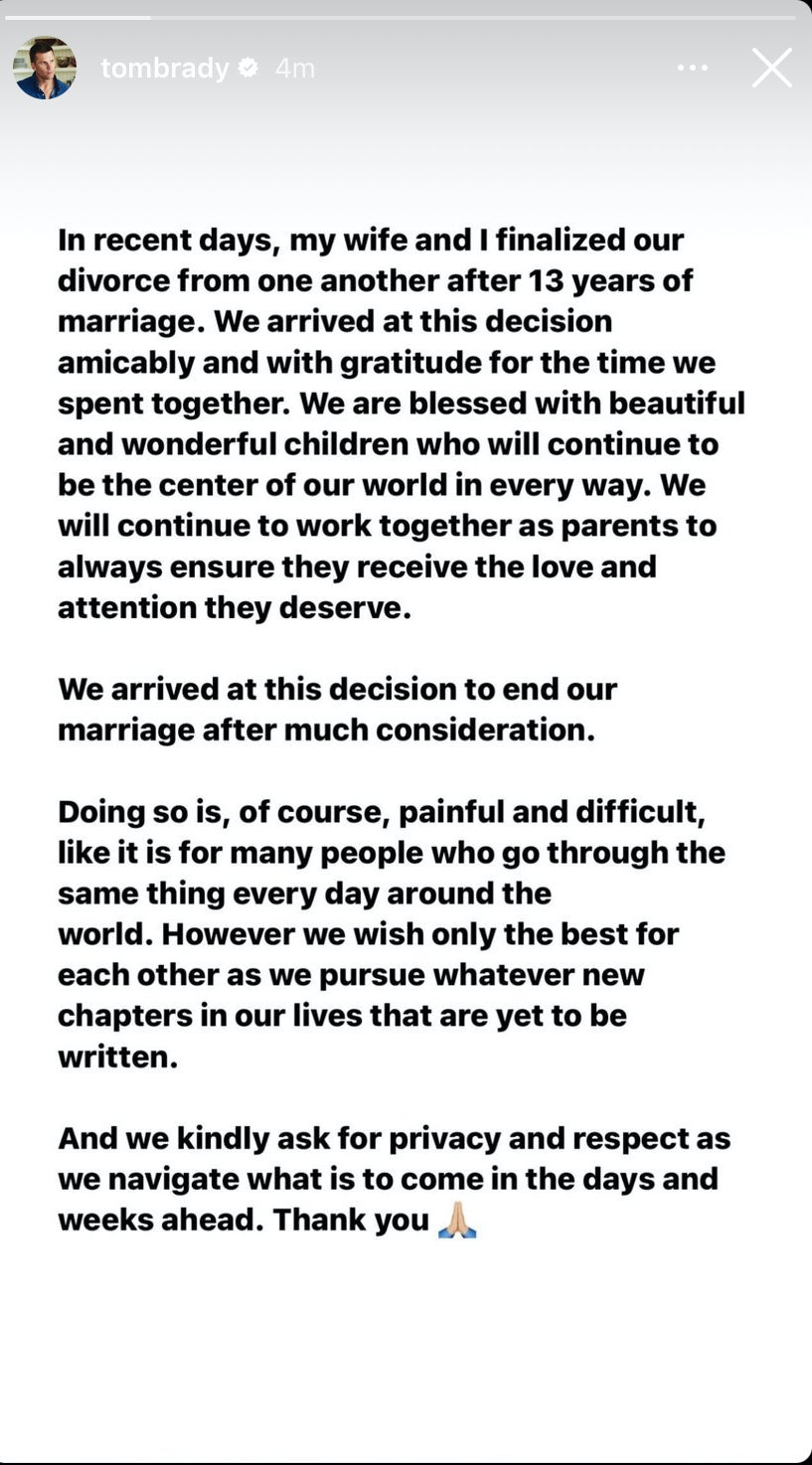 Tom Brady announces that he and Gisele Bündchen have finalized their divorce.

Bündchen, meanwhile, wrote that she felt “blessed” for the time she had spent with Brady, but that they had “grown apart.”

“With much gratitude for our time together, Tom and I have amicably finalized our divorce.” Bündchen said in a statement. “My priority has always been and will continue to be our children whom I love with all my heart. We will continue co-parenting to give them love, care, and attention they greatly deserve.

“The decision to end a marriage is never easy, but we have grown apart and while it is, of course, difficult to go through something like this, I feel blessed for the time we had together and only wish the best for Tom always.” 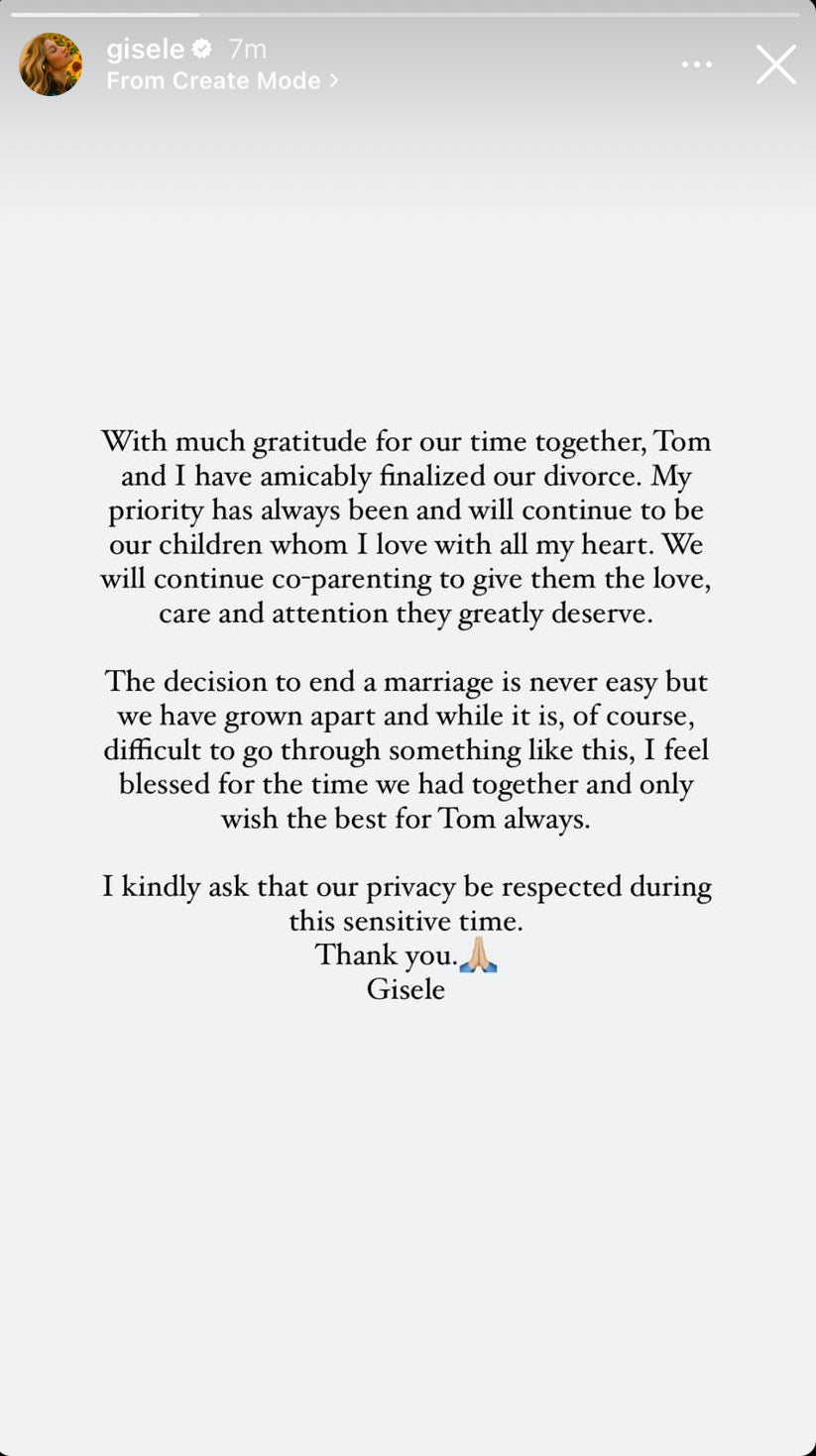 Both Brady and Bündchen concluded their statements by asking for privacy.

Brady and Bündchen’s announcements came less than two hours after TMZ reported that the supermodel and former Patriots quarterback had reached a settlement to end their marriage, with official divorce papers to be filed in Florida. Page Six and People quickly confirmed the report Friday morning as well.

According to TMZ, attorneys began work on terms of the couple’s divorce in early September, around the time that Page Six first reported that Brady and Bündchen were in an “epic fight” centered around the quarterback’s decision to unretire from the NFL.

Since then, a steady stream of stories about Brady and Bündchen’s deteriorating relationship continued.

On October 4, Page Six reported that the couple had hired divorce lawyers.

On October 7, People magazine quoted an anonymous source saying that Bündchen was “done” with trying to make the marriage work and is ready “to move on.”

In recent weeks, paparazzi spotted Brady without his wedding band and Bündchen without her wedding ring.

Brady and Bündchen, who got married in 2009, have two children together, Benjamin, 14, and Vivian, 9, and also co-parent Jack, 15, Brady’s son with actress Bridget Moynahan.