Three people were killed in a deadly gun attack at a medical building in Tulsa, Oklahoma, on Wednesday, 1 June. The gunman also died at the scene, according to police. 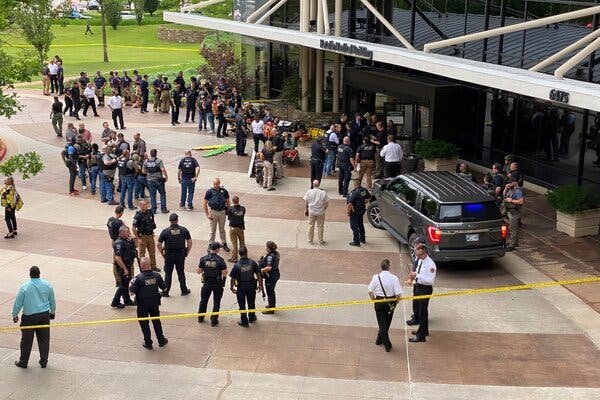 Shooting in a hospital building and a swift police response

Tulsa police were called on Wednesday afternoon on reports of a man armed with a rifle at the Natalie Medical Building within the city’s Saint Francis Hospital.

The call came in at 4.52pm, according to Tulsa deputy police chief Eric Dalgleish, who address the press on Wednesday.

Officers arrived at the scene and made contact with the suspected shooter and victims by 5.01, he added.

The officers that did arrive were hearing shots in the building,” Mr Dalgleish said. “That’s what directed them to the second floor.”

The floor of the building is at least partially taken up by an orthopedic medicine centre.

The police official said that Tulsa officers train on active shootings regularly, and that recent events in Uvalde meant that this practice was “probably fresh on everyone’s mind.”

“It’s a catastrophic scene in there right now,” he said.

The shooter is also deceased, though it’s unclear if he shot himself or was taken down by police.

Deputy chief Dalgleish said he was fairly “certain” the shooter killed himself.

“Right now we believe that is self-inflicted,” he said.

The victims were on a lower floor and were dressed like medical personnel, the police official added.

The identities of the victims and the shooter have not been disclosed publicly.

Police described the gunman as a Black male, aged 35 to 40, and said they were “getting close” to discovering his identity.

Rifle and pistol used in shooting

The individual was wielding a rifle and a pistol, both of which appeared to have been used in the shooting, according to police.

Police were moving through each room of the Natalie Building, verifying there were no other threats within the facility.

Federal agents from the Bureau of Alcohol, Tobacco, Firearms and Explosives are on the scene to assist with the investigation.

Detectives are now interviewing witnesses from inside the hospital building.

The Oklahoma Highway Patrol is also assisting with the law enforcement response.

The White House has briefed the president about the shooting, according to officials.

President Biden has been briefed on the shooting in Tulsa, Oklahoma. The White House is closely monitoring the situation and has reached out to state and local officials to offer support.

Families waiting to learn about the status of their loved ones are being directed to Tulsa’s Memorial High School for reunification and information updates.

Bystanders and officials said they were shocked by the shooting at a bustling hospital complex in Tulsa.

“There are over 10,000 people that are part of the Saint Francis health system that every day commit their lives to taking care or people in need, taking care of everyone in need,” said Dr Cliff Robertson, president and CEO of the Saint Francis Health System, during a press conference on Wednesday. “This sensless, horrible, incomprehensible act is not going to change that.”

“Tulsa is a safe, nice community to start a  family in. It’s kind of shocking to me it’s happening in our own backyard,” a man named Sal told Fox 23.

Debra Proctor was in another building at the hospital for a doctor’s appointment when the “shocking” shooting began.

“Police were everywhere in the parking lot, up and down the surrounding blocks,” she told CNN. “They were still arriving when I was leaving.”

US Representative Kevin Hern said he was in touch with Tulsa police about the “terrible situation” at the hospital.

“There’s still a lot we don’t know about what happened tonight in the Natalie Building, but what we do know is this: multiple lives were taken from us, and many more changed forever,” he wrote in a statement. “My prayers are with those who lost loved ones tonight.”

Two mass shootings in one week

The shooting follows another attack earlier in the week, when one died and seven were injured at a Memorial Day festival in Taft, Oklahoma, about 45 miles outside of Tulsa.

The Tulsa police department trained new recruits on active shooter tactics as recently as 27 May, according to the department.

Tulsa mayor GT Bynum said on Wednesday he didn’t want to discuss politics or policy around access to guns at this stage, given the grief families are experiencing right.

“If we want to have  policy discussions, that is something to be had in the future, but not tonight,” he said at a press conference.

Others, like US Senator Chris Murphy, a Democrat of Connecticut, said now is the time to keep pushing for gun reform.

“They’re happening at a pace we’ve never ever seen before in this nation’s history,” he said on MSNBC on Wednesday of the shootings.

This onslaught of violence has enouraged more Republicans than ever to consider tackling gun violence along with the Democrats, he continued.

“I’ve never seen more Republicans willing to discuss changes in our gun laws than I did today,” he said. “I don’t think we have to get it done all at once. What we’re trying to do is prove to Republicans that if they vote for measures that tighten up the nation’s gun laws, the political sky does not fall. In fact, they’ll get a lot more supporters.”

This is a developing story and will be updated with new information.