Two women have died following a crash on the M20 this morning.

The collision happened at around 8.20am on the hard shoulder of the coastbound carriageway between junctions 1 for Swanley M25 and junction 2 for Wrotham A20. Police were on the scene. Picture: UKNIP 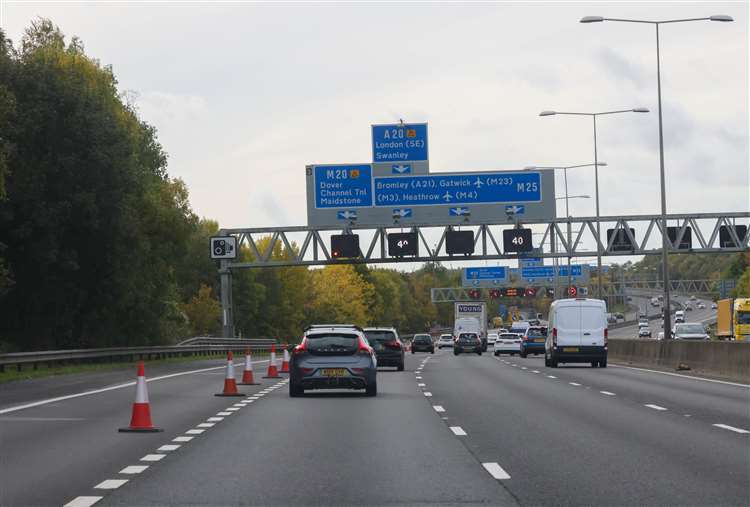 Two women died in a horror crash on the M20 near West Kingsdown. Picture: UKNIP

It is reported that four vehicles were involved in the incident, including a grey Infiniti Q30 Sport, a black BMW X5, a black VW Golf and a white Iveco Daily van.

Police attended, along with paramedics and fire crews.

Two women were declared deceased at the scene. Their next of kin have been informed.

Officers from the Serious Collision Investigation Unit are working to establish the full circumstances and are appealing to anyone with information to contact them.

The road was closed at around 8.30am and traffic was held on the opposite side to allow the air ambulance to land.

The M20 between junction 1 and 2 remains closed and lane 3 of 3 is also shut on the London-bound carriageway.

Traffic was held to allow the air ambulance to land. Picture: UKNIP

Motorists who were travelling in both directions of the M20 are urged to check for any dashcam footage, which may assist the investigation.

Drivers should particularly check footage between 8.15am and 8.20am and can upload dashcam via our online portal, here.

You can also provide information by contacting Kent Police on 01622 798538 and quoting reference SN/COJ/115/22, or by emailing email sciu.td@kent.pnn.police.uk.