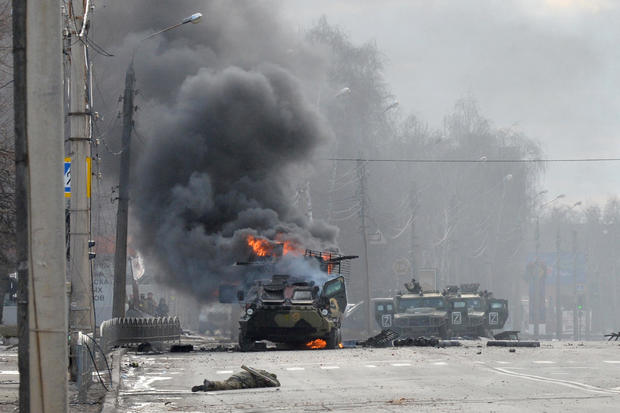 NEWS POLITICS
28/02/2022 Melana 0 Comments Putin, Ucraine
Russia would not clarify its aims for the talks, but CBS News’ Haley Ott reported that Ukraine’s key demands were an immediate ceasefire and the withdrawal of all Russian troops. Russian officials said the meeting had ended by early evening and that the respective delegations were heading back to their capitals to discuss the negotiations.

Ukraine’s capital city of Kyiv was still on edge Monday, but residents were allowed out of their houses and shelters for the first time since Saturday night, when the local government — bracing for an escalation of Russia’s siege on the city — said anyone out on the streets would be treated as an enemy.

Hours before the Russian-Ukrainian negotiations began at a location near the border with Belarus, Ukrainian officials said Russia had yet again shelled major cities overnight. Defense officials said Kharkiv, Ukraine’s second largest city, was coming under intense artillery fire after Ukrainian forces recaptured it from Russian troops the previous day.

Pressure was mounting on Russian leader Vladimir Putin, meanwhile, with the entire United Nations General Assembly gathering for an extraordinary emergency meeting to discuss the crisis a day after Putin said he was putting his nuclear forces on alert in response to what he claimed were “aggressive statements” by NATO, and punishing sanctions from the world’s wealthiest nations.

Ukraine’s ambassador to the United States alleged that Russia used a thermobaric weapon on Monday. Thermobaric weapons, also known as “vacuum bombs,” are one of the most devastating weapons short of nuclear weapons, CBS News’ Charlie D’Agata reported.

Ambassador Oksana Markarova said the alleged use of the weapon demonstrated that “the devastation Russia is trying to inflict on Ukraine is large.”